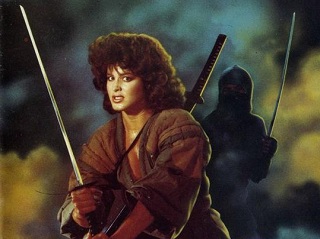 "In 1984, Alex Cox made Repo Man." This was the attention-grabbing sentence that launched Mostly Film on April 4th, 2011. Bit of a shit start for Europe's Best Website, wasn't it? Still, it got better, and they've let me write more articles for it since, despite everything.

By accident rather than design, the week surrounding Mostly Film's first birthday will be largely taken up with multiple-author pieces, and I've contributed to a couple of those. My input to this Wednesday's birthday celebration is fairly wee, so I'll leave you to remember to read that yourself when it's published. Instead, let's focus on today's article, Obscure Gems Two: Revenge Of The Obscure: it highlights six films that have been widely overlooked, and two of them have been chosen by me.

It's an educational piece, and the main thing it taught me is that I've almost completely lost the ability to write to a word count. My two contributions started life around the 400 word mark, and took absolutely ages to hammer down to the required 250. Still, at least the stuff I had to cut out for space can be recycled in this bonus feature, so it wasn't all wasted.

The first film I write about is Tomorrow I'll Wake Up And Scald Myself With Tea, a 1978 Czech science fiction comedy. Its title was just one of several running in-jokes on the Guardian Film Unlimited boards back in the noughties, as documented by nac1 in this handy blog post. By the time it was discovered that the Czech DVD came with English subtitles and was easily available online, it was pretty much a dead horse of a meme. But I was still curious about the film itself, so I ended up being the only FUer who forked out the cash to buy it. The BBG and I watched it in a Prague hotel room on Christmas Day, and rather enjoyed it.

These days, shamefully, the whole thing can be found online with the barest minimum of searching: but as a legitimate DVD is still available, I'm going to be all holier-than-thou and refuse to give you a link. Instead, you can get a little of the film's flavour from its entertaining opening credits, and a little more from the full-on Meme LOLocaust that results when Tomorrow I'll Wake Up And Scald Myself With Tea Hitler meets Downfall Hitler.

My other choice is Ninja III: The Domination, which I actually paid money to see in a cinema in 1984, thanks to an enthusiastic review by Anne Billson in Time Out. As noted in my piece, it follows on from Enter The Ninja and Revenge Of The Ninja - and when I say 'follows on', I mean 'has the same guy play a similar character in it even though they've got completely different names.' And yes, it genuinely shares a director and female lead with Breakdance 2: Electric Boogaloo, a film with the dubious distinction of its title having been parodied more times than the film itself has been watched.

For utterly unfathomable reasons, the first two films in the Ninja trilogy were reissued in the UK on DVD in 2011. But if you want to buy a copy of Ninja III, you'll have to track down a 1985 vintage VHS from your local Oxfam shop. Or you'll need to have bought one when it first came out, like I did. Even then, it won't be perfect, as the BBFC crudely lopped 72 seconds of shots (almost all involving throwing stars) out of the UK release, turning the synth score by Udi Harpaz and Misha Segal into some sort of prog rock masterpiece, with random bars in 13/8 time. So to taunt you a little more about this film it's virtually impossible to see in its complete form, here's the trailer. It is the trailer, isn't it?

The other four films mentioned in the article are nothing to do with me, but I'm happy to endorse them anyway. Strangler vs Strangler is surprisingly well-represented for clips on YouTube under its original title of Davitelj protiv Davitelja. But I've chosen instead to give you a short introduction to the film by legendary drive-in movie critic Joe Bob Briggs. He does talk about the film eventually, honestly, but you have to go through a lot of stuff about testicular self-examination first.

The Assassination Bureau, as TheTramp points out, can be watched on LoveFilm if you do that sort of thing. I'm embarrassed to admit that when I first saw the title, my immediate reaction was "That thing with Matt Damon and the guys in hats from last year? How is that obscure?" Oops. Anyway, here are the opening titles for you.

Hearts Of The West: aw, who doesn't like early Jeff Bridges?

And finally, Better Off Dead, a throwback to that simpler time when men with names like Savage Steve Holland, Screaming Mad George and Rowdy Roddy Piper were allowed to make films.

For all its cult reputation, I can’t make any great claims for Tomorrow I'll Wake Up And Scald Myself With Tea being any kind of lost classic, but it’s certainly bonkers enough to justify all the fond memories.