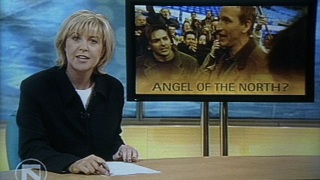 Well, that's Easter over for another year. I'm still recovering from what I did over the weekend, and you'll have to wait a few days to find out what it involved. But right now, I'm propping myself up in my sickbed to report on how Mostly Film celebrated the holiday. Inevitably, it involved a lot of films.

Specifically, it involved a lot of films with Jesus in them. In the runup to Good Friday, they looked at two of the most famous depictions of the Passion on film: Viv Wilby reviewed Pier Paulo Pasolini's The Gospel According To St Matthew, while Phil Concannon revisited the controversy that surrounded Martin Scorsese's The Last Temptation Of Christ.

But today, in Personal Jesuses, we get... the others. Eight Messiahs of varying flavours that have appeared in movies over the years, chosen by a group of regular contributors to Europe's Best Website. And two of them are my own personal picks, which means that once again I can provide you with a backup piece featuring video clips and jokes that weren't good enough to fit in the 250 word count.

First of all, a little context. Typically, these multi-author pieces are written to a fairly baggy brief, one which sometimes evolves during the writing and editing process. This particular three-day Jesusfest started with Phil wanting to write about the Scorsese film, and expanded into other depictions of Christ in the movies. Along the way, the definition stretched out to include surrogate and symbolic Christs as well. By then, though, I'd made my own selections - so you'll notice that of the eight characters discussed in Personal Jesuses, I've picked the only two who are actually the official Son Of God (assuming you take their depictions at face value, and I don't see any reason why you shouldn't).

Anyway, the first one I cover in the piece is Christopher Eccleston in The Second Coming - Russell T Davies' two-part mini series for ITV, made in 2003 just two years before their successful reboot of Doctor Who. Curiously, I've had this on my DVD shelf ever since it came out, simply because I missed the original broadcast and it sounded interesting. (These days, of course, we've got ITV Player for that sort of thing.) But I haven't got around to watching it until now - and it's impossible to do that these days without applying your own mental Who filter on top of it.

The parallels between Steve Baxter and the Doctor are everywhere, it turns out. Aside from the ones I mention in the article, there's also a scene in which Steve gets out of a guarded building using a blank piece of paper and some bullshitting, a technique which would be refined into the Doctor's psychic paper a couple of years later. There's possibly a thesis to be written on Davies' fondness for the surname Tyler, whether it's the Doctor's companion Rose or Baxter's nemesis Johnny. Not to mention the low-grade celebrity cameos that completely tie the series to a particular place and time, from Richard and Judy to Germaine Greer.

Despite all that, it's an entertaining watch, and I've got to admit the ending came as a surprise to me. Here's a scene that shows Eccleston at his best, as he performs his first miracle - attracting a huge crowd of followers to Maine Road, something Manchester City never managed in eighty years. (Yes, I admit it, that was the line I was most annoyed at having to cut for length.)

By comparison, I have to say that The Seventh Sign hasn't held up anything like as well. I can remember the occasion when I saw it quite vividly - staying overnight on business in Edinburgh, it was the first film I ever saw at the Cameo cinema. I was in my twenties and still fashionably nihilistic, so I can only assume that's why the apocalyptic nature of the film made such an impression on me at the time.

Nowadays? Not so much. It's all so bloody po-faced, for one thing, although I suspect that's the only way to play a story in which your characters spend so much time discussing the status of The Guf. The look of the film is aggressively 1980s, which means that on the plus side the apocalypse is generated using impressive physical effects rather than wobbly CG, but on the minus side just look at those haircuts and pullovers. Jack Nitzsche's electronic score was a standout for me at the time, but it's dated just as badly as those haircuts, once you realise it's using the same set of default keyboard presets that every other electronic score used back then.

Still, at least you can probably get the DVD cheap now if you're curious about it. Here' s the trailer:

And while we're at it, let's finish with some trailers and clips for the other six Jesuses mentioned in the piece. Here's The Lion, The Witch And The Wardrobe, the first of the Narnia movies.

Next up should be John Turturro's astonishing portrayal of Jesus Quintana in The Big Lebowski. As TheTramp says, "perhaps one of the greatest introductions to a character in any film," which makes it all the more irritating that there isn't an embeddable clip of that intro on YouTube. Plenty of parody versions, though...

FernGully: The Last Rainforest now. And yes, it is a little like Avatar, isn't it?

If there's one movie scene that's been done to death by YouTube wannabes more than Jesus Quintana in The Big Lebowski, then it's probably the lobby gunfight in The Matrix. But Hard 'N Phirm actually made it better, I think.

Monty Python's Life Of Brian had to be in an article like this, really: here's Brian at his most Messianic, despite what his mum says.

And to finish off, the trailer from A.I., which Indy has very, very nearly persuaded me to give a second chance.

More from me on Mostly Film next week, providing I can shift this cold in time. Because if I can't, this weekend's going to be damn tricky...