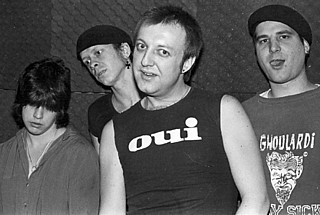 Comedy: Mopping up some much-delayed business from last summer's Edinburgh Fringe, I've finally caught up with Richard Herring's newest show What Is Love, Anyway? The show's programme - the usual lavish affair, available for free with a recommended donation to Scope - confirms how long WILA? has been doing the rounds, containing as it does references to the days when Herring and Andrew Collins hadn't fallen out. Similarly, it's hard for Herring to sound convincing on the negative aspects of love when he knows that we know that the story he tells in the second half of meeting his new long-term girlfriend is fast approaching its punchline: they're getting married over the Easter weekend. But as ever, he's an engaging storyteller, and admits this one is closer to the gentler autobiographical mode of The Headmaster's Son than anything else he's done. Having said that, Herring's unscripted shows are where he really takes off nowadays, so we can look forward in May to what the cool kids will doubtless be calling RHLSTP. (Rerlstup!)

Music: The first time I saw Joe Gideon And The Shark, they were supporting Nick Cave in the Art Deco splendour of the Troxy. The second time, they were headlining at the more intimate Borderline. Last week was the third time, and their gear took up the entire back wall of the tiny little basement at Power Lunches in Dalston, making them the only live act I've ever seen playing progressively smaller venues each time. To be fair, the most recent one was a slightly experimental affair, with the brother and sister duo trying out a batch of new songs from their forthcoming second album. They're all sounding great: as before, Joe tells stories over guitar riffs, while Viva performs choreographed miracles with drums, keyboards and a loop box all at the same time, but the new material adds a healthy dollop of visceral noise on top of the tunes. That may just be a consequence of the live setting, of course: hopefully we'll find out when the new record's released.

Video: One event I forgot to tell you about from last month: the one-off screenings of the Chemical Brothers' live movie, Don't Think, which took place roughly simultaneously in cinemas across the world. It's an admirable attempt to convey the audio-visual chaos of a Chems gig in a confined space. The East London screening I went to had several dozen audience members literally dancing in the aisles by the end, something I haven't seen at a movie since, erm, U2's Rattle And Hum in the late 80s. Anyway, for those of you who missed it in cinemas in February, Don't Think is now available in a DVD/CD package for you to recreate the experience at home. You may have to put your eyeballs directly onto the TV screen to get the same level of visual impact, but at least you can crank up the bass higher than most cinemas would normally dare.

In the meantime, your Simian Substitute Site Of The Month for April 2012 is Easter Monkeys. You know how it is some months: I get lazy, and just slap the word 'monkey' and the name of an upcoming holiday into Google and see what comes out. Which is how I found out about Easter Monkeys, an early 80s Cleveland post-punk band whose reputation far outweighs the actual amount of material they recorded. Led by guitarist Jim Jones (subsequently of Pere Ubu) and singer/saxophonist Chris Yarmock, during the four years of their existence they released precisely one song on a compilation album: a posthumous collection, Splendor Of Sorrow, made a limited appearance in 1990, and got a fuller release in 2010.

Obviously, a band that split in 1984 never quite got around to setting up an official website. But this fan-created Facebook page does the job quite nicely, as a repository for discussion of the band's legacy and a place to post videos and pictures of their performances.

In other news: yes, it's true, March was a quiet month round here. April should see a bit more activity: if nothing else, I've got a few things coming up on Mostly Film in the month of its first birthday, and I'll be providing backup material for those. And there should be a couple of other original pieces for you, too.

Anyway. I haven't had any comments for a while that aren't either from spammers, or from me. Anyone fancy rectifying that?