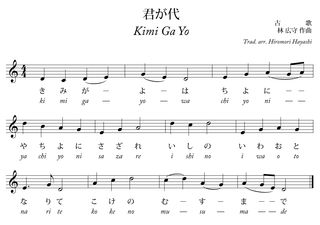 1. The best place to start is with the original, I guess. Fascinating fact: it's one of the shortest national anthems in the world. But what does it all mean? Well, it's all directed at the Emperor: "May your reign / Continue for a thousand, eight thousand generations / Until the pebbles / Grow into boulders / Lush with moss." There's a cheeky transliterated English version available, where the opening line kimigayo wa becomes kiss me girl and your old one: though since some sources suggest this is an oblique reference to the prostitutes who worked in Japanese POW camps, maybe 'cheeky' isn't the word.

2. As you can see, it'd take quite a bit of practice for a Westerner to get their tongue around Kimigayo. And that's presumably why the Japanese invented Wii Karaoke.

3. One of the places where you'll hear it sung frequently is at the start of big sporting events. Here's proper J-Pop star GACKT giving it the full Mariah Carey wobble, for example.

4. Less seriously, here's footage from a boxing match where the anthem was growled by Riki Takeuchi, in precisely the manner you'd expect from an actor who's played a lot of yakuza in his time. Note that the person who posted this on YouTube has tagged it as 'comedy'.

5. And then there's Tak Matsumoto of B'z giving the tune a little more respect, albeit on electric guitar.

6. YouTube is full of musicians showing off, and there are a few of them who've used Kimigayo as a vehicle to display their skills. So, we have Jazzy_T on sax...

8. ...and ANBO and FzZzY giving it some human beatbox.

9. Western bands! Looking to patronise a Japanese audience and get a cheap reaction? Then try playing their national anthem in the middle of your set. The Scorpions sound a little bit needy when they try it in this audio clip.

10. Rivers Cuomo of Weezer, on the otherhand, manages to make it a throwaway quote during the instrumental break of a song, while looking like he's really concentrating on getting it right.

12. One of the more terrifying aspects of the Japanese pop scene is the vocaloid craze, in which records are made entirely artificially with synthesised vocals and anime frontpersons. Here's the completely nonexistent Miku giving the tune a slightly jazzy twist.

13. You were probably expecting a proper old-fashioned reach-for-the-lasers trance version at some point: well, here it is. Interesting how it uses the tune as a counter-melody rather than pushing it all the way to the front.

14. A choral attempt from the Yale Wiffenpoofs of 2010. I had no idea they were a real thing.

15. Something rather lovely and ambient from Stella Ingrosso and Massimiliano Fabbri.

16. A tasteful bossa nova rendition, from what Babelfish claims to be You Generation. I may have got that wrong, but The BBG's not around to correct me right now.

17. Kimigayo Texas hits the anthem with some shitkicking Stevie Ray Vaughan blues guitar to see if it works. I'm not entirely convinced it does, but it's fun watching them try.

18. Noodly piano variations on the theme by Eric Pruvost.

19. I'm not quite sure what this remix is trying to do, but it tries a few different things along the way.

20. The West's favourite Japanese hipsters Pizzicato Five wrap this selection up with a version which reveals something that the previous 19 didn't: with just the slightest tweak, Kimigayo could easily turn into Do You Know The Way To San Jose.

So, that was how I spent last Bank Holiday weekend. How about you?

Wow. Who knew you could do so much with one national anthem? Great post. And a great compilation of videos as well!