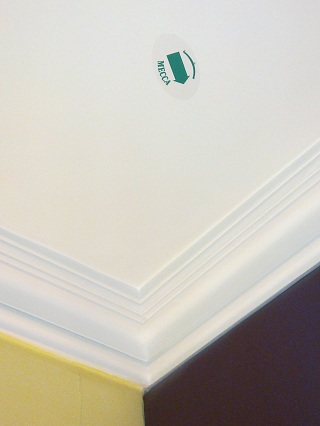 I've been to Abu Dhabi once before, back in July 2010 - I mentioned it here briefly at the time. I didn't really get to see much of the Emirate on that first visit, mainly because I tend to rely on public transport in these situations, and at the time Abu Dhabi had virtually none worth speaking of. The bus service seems to have improved quite a bit in the last two years, but really, who needs it? Taxis are plentiful, and dirt cheap with it, a consequence of being in one of the most oil-rich places on the planet. One of the cinemas I visited for the Mostly Film piece was eight kilometres away from my hotel, according to the wonderfully detailed taxi receipts they give you here: that particular journey cost a little over two quid in a cab.

Anyway, once I realised how cheap the taxis were, I didn't feel constrained to spend every night in the hotel. I was staying at Le Royal Meridien, which was nicely positioned for where I was working that week, and also comparatively inexpensive considering its five-star swankiness. (Although if you're booking a hotel in Abu Dhabi with a view to claiming it back on expenses, watch out for the 10% service charge and 6% tourist tax they tend to add on at the very last minute.) Aside from the daily breakfast buffet at L'Opera Brasserie, I had pretty good meals at two of the hotel's other restaurants: interesting Asian fusion at Soba, and a rather fine beef and rocket pizza at Amalfi. The Belated Birthday Girl was keen for me to try out the revolving rooftop fine dining at Al Fanar, but sadly my budget didn't run that far.

Most of my other excursions were to Abu Dhabi's various malls, for the primary purposes of shopping, eating and movies. I went to three of them in total. Al Mariah Mall was the closest to the hotel, just a couple of minutes walk away, but easily the tackiest one I visited: full of cheap jewellers and mobile phone unlocking stalls, it was like seeing a London high street arranged into a vertical stack. Freakily, it took me several minutes to realise that I'd been there before, having approached it from the other end of the street on my 2010 visit. The Grand Cinema inside the mall didn't have anything I particularly wanted to watch, but it was where I first spotted the Bridesmaids-referencing poster for the Egyptian movie Reklam.

The other two malls took a bit more walking to get to, but were well worth the effort. Abu Dhabi Mall is much more what you'd expect from a UAE shopping centre, with lots of high end brands along with nostalgic names from the past like Virgin Megastore and Borders. (The closest I got to nostalgia at Al Mariah Mall was discovering a branch of 90s stodge merchants Pizzaland.) There are plenty of food options available there, including that nightmarish Pizza Hut offering referenced at the end of the Mostly Film article - also available with chicken nuggets. Is it just me, or does anyone else think that the last line of the voiceover in that ad goes "fuck off mate, Pizza Hut?" Anyway, I had what looked like a much nicer Lebanese flatbread burger dish at Zaatar w Zeit next door.

Marina Mall is much more of a trek from Le Royal Meridien, but it's a lovely walk along the coastal path known as the Corniche - I strolled the eight kilometres between the two one evening as the sun went down. You're ready for something to eat after that, and again there are lots of restaurants available: Biella is an Italian-based chain which can do you a rather nice grilled hammour, while Zyng is another variation on the Asian fusion concept, specialising in construct-your-own-stirfry offers. There are also plenty of shops to browse, although you wouldn't know it from looking at the mall website (which I'm pretty sure was still under construction back in 2010).

Marina Mall also has the Vox Cinema inside it, which is where I saw Amn Dawlat. It's a swish multiplex organised along the same lines as the newer Vue cinemas in the UK, including Gold screens with extra-comfy seating and Max screens that aren't quite big enough to be IMAX. By comparison, the Eldorado Cinema - where I saw Mayamohini - is a little less impressive, although much higher on charm. It doesn't have a website of its own, meaning that when you search for it you find pages of disgruntled people claiming "it is the dirtiest cinemahall". That's a bit harsh, I think: it's certainly not up to the same presentation standards as a sterile modern multiplex, but just look at that frontage! (And look at the rest of my photos, while you're there.)

So, that's another Monoglot Movie Club done and dusted. Next one will be in Japan, I suspect...