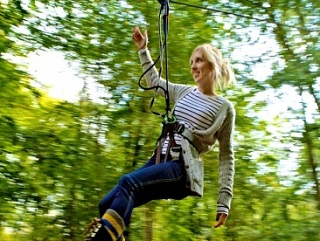 In the meantime, your Simian Substitute Site Of The Month for May 2012 is Go Ape. They're a company who arrange forest adventure days across the UK where you can go on high wires, rope ladders and Tarzan swings, all with a comparatively low risk of death. I hadn't heard of them at all until a week or so ago, and then got hit with their work from two different directions almost simultaneously. The Holiday Inn Express in Aberdeen (brilliantly located next door to the BrewDog AGM venue AECC, and dirt cheap) had Go Ape leaflets in their lobby, for anyone interested in visiting the one at Crathes Castle. I also had a report from a nameless colleague at Mostly Film (well, this guy), who complained that he was nearly quadraspazzed by one of their events in Enfield.

Anyway, it all looks very exciting if you enjoy that sort of thing. Me, I'll probably just be sitting at home with a nice cup of tea and reading your comments below. Assuming you leave some, of course.