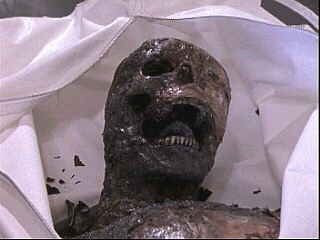 Happy birthday, Oz! The first ever episode of HBO's sweary, violent, big-dicked prison drama was broadcast 15 years ago today. How do I know this? Because 15 years ago next Thursday (July 19th), I travelled to the USA for the very first time. My first night on American soil was spent in a tatty hotel that wasn't quite as close to New Orleans as the name Days Inn New Orleans would suggest. My stay was made slightly more more comfortable by the discovery that on my TV that night, I could watch the second ever episode of Oz, a new show from the makers of one of my favourites at the time, Homicide: Life On The Street.

Oz eventually made its way onto Channel 4 in the UK, so I was able to catch up with the first episode, and watch all the ones that followed. I became a fan, and even wrote about it here in 2002 (when Channel 4 were four seasons into what would eventually become a six season run). Ten years later, I thought it was worth revisiting the show for the good people at Europe's Best Website. The Editor-In-Chief was initially sceptical - "the 15th anniversary, eh?" were his exact words - but I went ahead and did it anyway.

So yesterday on Mostly Film, I came as close as I could - given our current three-days-a-week schedule - to marking that 15th anniversary with a piece entitled The Great And Powerful Oz. And today on this site, we mark the actual anniversary with the usual bonus content.

That bonus content is driven by a sentence in the final paragraph of the piece, where I comment on how it's still fun seeing former members of the Oz cast turn up in unexpected places. So let's open up the where-are-they-now file to see what the inmates have been doing since the show finished in 2003.

Prisoner #93A234, Simon Adebisi
Adewale Akinnuoye-Agbaje subsequently went on to be Mr Eko in Lost, although he's also had some film roles too. They've been a mixture of tiny parts in big movies and big parts in tiny movies (Best Laid Plans, below, counts as one of the latter). He's currently talking up ambitious plans to direct an autobiographical film. Best of luck to him, and hopefully it'll include a passing reference to that Pet Shop Boys video he was in in 1991.

Prisoner #97A413, Miguel Alvarez
Kirk Acevedo has always kept himself busy on TV, famously spending an entire season of Oz locked offscreen in solitary so he could go off and make Band Of Brothers. He's currently part of the supporting cast on the US version of Prime Suspect. Can't find any relevant clips with him in them on YouTube, so you'll have to make do with an interview instead.

Prisoner #97B412, Tobias Beecher
Lee Tergesen is another one of those people who gets a steady stream of one-off roles in TV series: the closest thing he's had to a regular role since Oz is in HBO's Generation Kill. This particular clip is labelled on YouTube as 'funny moment', which does leave you in despair at the sort of people who upload things to YouTube.

Prisoner #95H522, Augustus Hill
Harold Perrineau was also in Lost, but I don't think Michael and Mr Eko got to spend any in-jokey quality time together - I'm pretty sure I would have remembered if they had. Most recently, he's done voiceover work for the animated version of Blade, where he was, um, Blade.

Prisoner #98K514, Chris Keller
Christopher Meloni is the Oz alumnus with the closest thing to a steady job, racking up twelve years or so in the show I insist on calling Law & Order: SUV to amuse myself. I was never really a fan of the show, so it's amusing to discover that he was a popular enough character to inspire gushy fan videos like this one. I believe he's turning up on True Blood next. Hope The BBG doesn't consider that to be a spoiler.

Prisoner #97P904, Ryan O'Reily
Dean Winters has been exploiting his charm on a variety of shows since Oz, but none of them are as satisfying as his occasional appearances on 30 Rock as Liz's doofus boyfriend Dennis. Clips of him in action are surprisingly few and far between - probably down to regular cease 'n' desist purges by NBC, I'd imagine - but this little one showcases him perfectly. Apologies if the space below is occupied by a takedown notice by the time you read this.

Prisoner #97S444, Kareem Said
Eamonn Walker has always been a busy actor, but he'll probably never live down the fact that he was Alf Garnett's carer Marigold in In Sickness And In Health before he moved to the US and worked on Oz. He's had plenty of high profile parts since, notably playing Othello on both stage and screen. The stage version was more traditional than this one below, though.

Prisoner #92S110, Vern Schillinger
J.K. Simmons has a perfectly fine movie career - including a spell as the most perfect embodiment of J. Jonah Jameson ever - but nothing beats that astonishing moment when you discover that one of his most regular gigs is doing voiceover work for the yellow M&M on the adverts. (That includes those terrible From The Red Carpet things they make British cinemagoers sit through, too.) Billy West, who also does the voice of Fry in Futurama, plays the red one. Perhaps next time you see an M&M advert, you might like to imagine the two sweets in some sort of Nazi/prag relationship. Or not. Either way, check out the sneaky stunt casting in this ad:

So congratulations to the inmates of Oz for rehabilitating themselves so well over the years, becoming cops, noblemen, vampires and peanut-filled chocolates. Although to be honest, it's a prison guard who's done the best out of all of them: Edie Falco, who moved from being Diane Whittlesey on the show to Carmela Soprano and Nurse Jackie. Now that's a career path.

Jon Seda at his most charismatic up the top there, I notice.