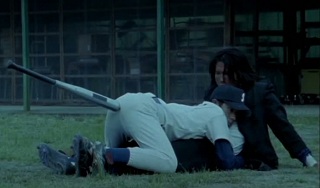 Yes, yes, I know, I know. If you look at the list of Recent Posts down the right hand side of the page, roughly half of them are backup bits of nonsense I've knocked up to promote more considered pieces on Europe's Best Website. Like I said earlier, it's displacement activity while I try to rev myself up to write about those two weeks we spent in Japan back in... oh, God, May. The Belated Birthday Girl and I are working on it, promise.

But anyway, I've done a bit more for Mostly Film this week, along with several other people - including The BBG herself. (It's the first time we've shared a byline there since our piece on Takashi Miike last year, I believe.) We've all collaborated on an article called Faster, Higher, Wronger in which we discuss sporting films of various types, mainly focussing on the more peculiar end. So as usual, I'm plugging it here with a playlist of clips and trailers from the films namechecked.

Here are the eight movies discussed in Faster, Higher, Wronger:

Harry Potter (Mr Moth). "Quidditch is easily among the worst fictional sports, with rules as arbitrary and self-defeating as Calvinball."

Shaolin Girl (The Belated Birthday Girl). "She ends up becoming the star player of her university lacrosse team using her kung fu skills."

Billy The Kid And The Green Baize Vampire (Jim Eaton-Terry). "One day I’ll sit down and find out how bad it really is."

Baseketball (The Tramp). "A combination of basketball and baseball rules with a dollop of trash-talking."

Battlefield Baseball (me). "...which may be the real secret of making a watchable baseball movie."

Chess Fever (Philip Concannon). "Chess has long been a sport associated with obsession and madness."