MOSTLY FILM: Pining For The Fjords 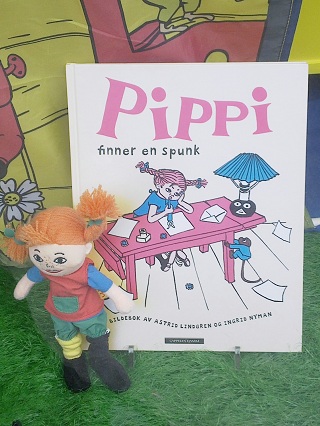 I've been off travelling again. Mind you, regular readers of Mostly Film are probably already aware of that. Yesterday, Europe's Best Website published the latest in my series of Monoglot Movie Club articles, in which I attempt to analyse the cinematic output of foreign countries without the benefit of English subtitles. So far this year I've covered the Netherlands, Brazil, the United Arab Emirates and Japan: this time it's Norway that bears the brunt of my ignorance, in a piece entitled Pining For The Fjords.

As is usually the case, over on this site you get some travel tips as background material. So what can I tell you about Norway that isn't covered in the Mostly Film piece? And does it have to include a reference to the disturbing Pippi Longstocking book that I saw in an Oslo shop window? (Not a fake, honestly. See this Oxford University Press blog for a full explanation of what happened there.)

My trip to Oslo at the end of August was kind of a last-minute affair. Actually, make that very last minute. The first inkling I had of it was on a Friday afternoon, the work was confirmed on Monday morning, and by Monday evening I was on a plane out to Norway. With such a rush to get me out there, obviously compromises were involved when it came to the accommodation. A central Oslo hotel would have been nice - the Comfort Hotel Xpress has a nifty-looking website, considering the reputation of the chain elsewhere - but it was impossible to book one at such short notice.

Which is how I ended up at the Soria Moria Hotel & Conference Centre, which is at least upfront on its website about how inconvenient it is for the city: "located 500 metres above sea level, on the roof of Oslo... just 20 minutes from the centre." Over the years the idea of a 'restaurant with rooms' has become fashionable: well, Soria Moria is a conference centre with rooms, and - internally, at least - is precisely as atmospheric as that makes it sound. It's the hotel that I anonymously accuse of failing my personal check-in checklist in the Mostly Film piece. You may be surprised to learn that the lack of soap in the shower was the most disruptive problem of the three, because this was one of those hotels that doesn't trust you with removable toiletries, and gives you a liquid soap dispenser that's bolted to the bathroom wall. As the dispenser was empty, and none of the night staff had the keys to open it, they had no alternative but to move me to another room.

Still, I can't really argue about the Soria Moria - after all, I wasn't the one paying for it. The breakfast buffet is rather good: the evening a la carte, average and expensive. But all the food is served in a restaurant where the views from 'the roof of Oslo' actually make most things taste better. It certainly made for one of the prettiest commutes to work I've ever undertaken: a ten minute stroll to Voksenkollen station, then a half hour Metro ride down the mountain into central Oslo. It was even better once I'd decoded the carefully hidden pricing policy - 30 NOK (about three quid) buys you a ticket to any location within the area covered by the Metro, on any form of transport, as long as you complete your journey within an hour of starting it.

The alternative to that is a taxi ride that costs 500 NOK, as I discovered to my horror on my first night. The two most expensive things in Oslo appear to be taxis and booze, so as an IT professional I felt like I was being picked on personally. Still, the high cost of alcohol contributed to my best story of the week, as on my final night I was taken out to dinner by the man who was ultimately paying all the bills. Six of us ended up in Statholderens Food & Wine Cellar, and we knew what kind of night it was going to turn out to be when the man with the wallet said "I think we should go for the ten course menu, how about you?" With the wine flight and additional drinks on top of that, it blew Cracco-Peck out of the water as the single most expensive meal I've ever had. (The BBG's particularly miffed at not having been there, because she could have eaten everything on the menu apart from the beef.)

Not much else to report, really, apart from a few random points. SAS is, I think, the only airline I have spent more than two hours flying on without receiving a single offer of food, free or otherwise. (Their inflight mag currently boasts that they now offer tea and coffee.) The Flytoget airport express train is just as reliable and expensive as the one we have back home in Heathrow. OsloKino is the best website to find out what's on at the pictures. And Londoners: if you buy the disposable Impuls tickets for public transport, don't accidentally leave them in the same wallet as your Oyster card, because they'll freak out the ticket gates when you get back home again.

And I guess we have to finish with Pippi Longstocking after all. I am not responsible for the one star review on Amazon.