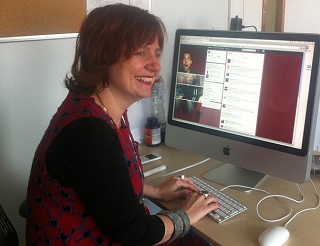 With former London Film Festival supremo Sandra Hebron moving on, leaving behind several years of fond memories - not to mention a rather lovely email that she sent me a few weeks after her final festival, which I don't think I can say anything about no matter how much Suzanne Vega Fanclub begs me - anyway, after all that, it's time for incoming director Clare Stewart to make her mark. Thanks to one of my colleagues on Europe's Best Website, I know a little about her previous form: notably the Sydney Film Festival, which she ran for five years until 2011.

This is Stewart's first London festival, but it's my twenty-fourth (count 'em), and in that time I've seen three changes of LFF director - Sheila Whitaker to Adrian Wootton in 1997, Wootton to Hebron in 2002, and now Hebron to Stewart. This transition appears to be the most radical of the three, as Stewart's implemented a few major changes from day one. The obvious one is the reduction in the festival's length from 16 days to 12, which I suspect was forced on her by the funding cuts that are hitting everyone in the arts right now. Stewart's tried to compensate for this by spreading the LFF across a greater number of cinemas, but obviously that doesn't help those of us who are already packing the maximum amount into a festival day.

What about the other changes? Well, I was initially doubtful about the removal of priority postal booking (particularly given my recent problems with other parts of the BFI's IT infrastructure), but we seem to have ended up with nearly all the tickets we asked for anyway. Some concerns have been raised about the way that the programme is no longer arranged by country of origin, and instead uses touchy-feely categories like Love, Laugh, Thrill, Debate, Chunder and so on: but it doesn't really bother me all that much, and you can still sort films by nationality on the website if you're, y'know, some sort of racist or something. You could argue that the increased focus on the nominees for the Official Competition gives them a sneaky excuse to charge premium prices for more films, and I couldn't really disagree with you on that one.

But generally speaking, the things Stewart has changed can be rationalised and explained away. The one I'm a bit worried about at the moment is the trailer for the 2012 festival. Compare it with the trailers for 2003-2005, 2006-2008, 2009, 2010 and 2011, and you notice that the earlier ones all have one thing in common: London. There's nothing in the new trailer that ties it to this city - it's so generic, it could be for a film festival anywhere in the world. Is this an advance warning that the London Film Festival could be losing some of its Londonosity?

Well, inevitably, we'll find out. Once again, with the help of Spank's Pals I'll be providing you with daily reports from the LFF, telling you all about the best and the worst films out there. We just won't be doing it for as many days as before, is all. But at least we'll be doing it in more detail than those lazy bastards at Time Out can manage nowadays. Watch this space.

Much as I am annoyed by the actual changes Clare Stewart has brought to the LFF - I think the "themes" are a silly way to organise the films - what I really hate is when managers waltz in from their last job and slap on the same changes at the new one, and as far as I can see, that is what she has done. Of course I expect a new director to want to make their mark and to have ideas they want to see put into action. But to make such radical changes on day one, before she understands the festival or the city or audience, is the sort of high-handed management approach we see far too much of. Sandra made changes over her time in charge - my first festival was Adrian's last - but she made them with sensitivity, and after building up a relationship with the festival and the audience.

We will see over the next 10 days, and the coming years, whether anything substantive changes - for the better or the worse - but for me, she didn't get off to a good start.

Oh, and as for generic festival trailers - here's one from Sydney 2011.

Unless the boots were part of an email attachment, no real begging I am afraid !