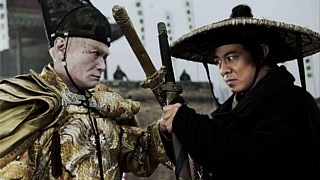 Tsui Hark is, as he says in the lyric quoted above, a film director. Since recording that song with Sparks in 1994, he's made several more films, the most recent being Flying Swords Of Dragon Gate. I reviewed it for Mostly Film a couple of weeks ago, when it made the briefest of appearances in UK cinemas. As of today (October 29th), you can now buy it on DVD and Blu-ray. As I didn't have time to promote the review properly when it was originally published (what with the London Film Festival taking up all my time and everything), this seems like a good day to do the traditional accompanying hype piece, with an hour or so of video clips to introduce you properly to Tsui's work.

I've assembled twelve clips in the above playlist, as follows:

1. Tsui Hark. Oh, you thought I was taking the piss about the Sparks song back there, did you? Well, you were wrong. This is a track from their 1994 album Gratuitous Sax And Senseless Violins, and features Tsui himself on lead vocals listing his achievements. For the purposes of this clip, his lines are poorly lipsynched by Ron 'Hitler' Mael, leaving brother Russell to take over on keyboards.

2. The Incredibly Strange Film Show: Part 1. First broadcast in October 1989, here's a terrifyingly youthful Jonathan Ross presenting the first half of a profile of Tsui Hark's work to then. Treat it as useful background material for the clips to follow. Regular visitors to BFI Southbank's Asian programmes can also feast their eyes on what Tony Rayns used to look like with hair.

3. The Incredibly Strange Film Show: Part 2. More of the above. Don't be confused by the 'End Of Part One' caption at the end - the rest of this episode focussed on the work of Stuart Gordon, and is therefore outside the scope of this article.

4. The Butterfly Murders. A trailer for Tsui's 1979 debut feature. Never actually seen it myself, but it looks like his style was already fully-formed, doesn't it?

5. Zu: Warriors From The Magic Mountain. I mention this in the Mostly Film piece as the movie that first introduced me to Tsui's deranged imagination. You can find the original Hong Kong trailer in that article: this one is a fan edit, obviously. Remember when everyone was doing this shit just twelve months ago?

6. A Better Tomorrow. Tsui isn't just a director, he's also been a highly influential producer over the years, and the driving force behind some landmark Hong Kong flicks. For example, John Woo's 1986 breakthrough hit (that's Woo himself making a cameo appearance in the final seconds of the clip). It created the whole Heroic Bloodshed genre of honour-driven shoot-'em-ups: this one scene alone turned Chow Yun-Fat into a star overnight. (What it's doing on a channel entitled Kung Fu Comedy is entirely beyond me, since it features neither.)

7. A Chinese Ghost Story. Similarly, Ching Siu-tung's 1987 megahit (also produced by Tsui) mixed horror, comedy and romance in ways that countless Chinese directors have been ripping off ever since. But the first one is still the best, and this trailer gives you a feel for the craziness involved.

8. Once Upon A Time In China. One of Tsui's finest achievements as a director - at least, I thought that when I first saw it, although when I caught it again a few years ago it seemed a tad overblown. But the fight scenes are textbook examples of modern kung fu choreography, and a masterclass in camera movement and editing: Tsui knows something that very few action directors seem to realise these days, which is how effective stillness can sometimes be. This climactic scrap still leaves me speechless to this day.

9. Double Team. From the Mostly Film piece: "Let’s not forget that one of his few Hollywood movies, a Jean-Claude Van Damme flick called Double Team, had a climax that involved Van Damme trying to fight Mickey Rourke while rescuing a baby from a marauding tiger in the middle of the Colosseum, which had been rigged with landmines." For space reasons, I actually missed a bit out from that description: while all that is happening, Dennis Rodman is riding around the Colosseum on a motorbike. No, you're drunk. Apologies in advance for the dubbing.

10. New Dragon Gate Inn. Another Tsui production, this one from 1992 and directed by Raymond Lee. This is based on the same source material that Tsui would ransack two decades later for Flying Swords Of Dragon Gate.

11. Detective Dee And The Mystery Of The Phantom Flame. The noughties were a bit of a quiet period for Tsui, at least as far as Western audiences were concerned. But this 2010 franchise launcher marked a definite return to form (hence the US trailer), with a prequel scheduled for 2013.

12. Flying Swords Of Dragon Gate. And finally, the film that brought us here in the first place. This UK trailer isn't quite as cool as the Chinese one embedded in the Mostly Film article: but then I've always been a sucker for trailers with BIG WRITING SPLASHED ACROSS THE SCREEN. If you want to see the movie in 3D, you'll have to get the Blu-ray, which makes the link at the bottom of this page a bit of a first for me.