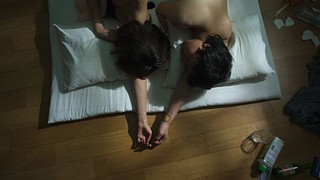 Earlier today, The Belated Birthday Girl received a very apposite email: a note from Dark Horse Comics advertising a range of newly-translated Korean graphic novels with the tagline 'Gangnam Style!' Is this the year that Korean pop culture finally goes overground in the West, or is Psy's hit record just a one-off? Certainly the Koreans have become the major players of Asian cinema, on the evidence of film festival programmes over the last few years. Alongside the crime dramas with blunt instruments and stabbing that we've come to know and love, there's a second stereotype to consider: the arty romance packed with post-modern flourishes. Hong Sang-soo's had that corner of the market sewn up for some time, but this is the first film I've seen that suggests this might actually be a genre.

Romance Joe has one of those plots that's really hard to summarise in a linear fashion: all you can do is grab the key thread, pull really hard, and see what comes out. That thread is the man they call Romance Joe (Kim Young-pil), and the two distinct periods of his life focussed on by the film. As a teenager, he interrupts the suicide of a female schoolfriend, only to find it doesn't help much with getting into her good books. And as a middle-aged failure of a man, he checks into a hotel to kill himself, only to have his suicide interrupted by coffee-woman-cum-call-girl Shin Dong-mi. It turns out that she has her own story to tell. But then, doesn't everybody?

Because this is the real point about Romance Joe: it's about people who tell stories, and people who tell stories about people telling stories, and so on as far down the rabbit hole as you're prepared to go. Having seen Hong Sang-soo's latest just two days ago, all this narrative layering and drunkenness feels a little familiar, but the difference is that Hong's been doing this for longer and makes it look natural. Lee Kwang-kuk (who, unsurprisingly, has worked as an assistant on several Hong films) is proclaimed at the start of this movie as the winner of a new director prize, but you'd be able to guess that even without the title card: this is obviously the work of a filmmaker who wants to show off and make a splash with his debut.

To be fair, he's done a pretty good job. It's only in retrospect that you really notice all the narrative hoops being jumped through: at the time, you're more emotionally caught up with the characters, even as you're struggling to keep tabs of where they are in each particular storyline. It's nicely played by all concerned, but Shin Dong-mi is a particular standout as the feisty coffee lady, possibly the most fully-drawn character in the whole piece. And just when you're convinced that Lee can't possibly tie everything together in a single final scene, he goes ahead and does it anyway, the clever bugger. I'd be curious to see what his next film looks like, once he's calmed down a bit. 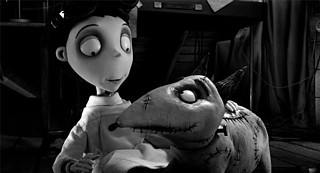 The initial idea was to just go and see the free exhibition The Art Of Frankenweenie, a look at the design behind the film chosen for this year's LFF Opening Gala. But then we realised a) what a huge gap we had between Romance Joe and our final film of the day, b) how comparatively small the exhibition was, and c) that so much time has elapsed since the Opening Gala, we could now see Frankenweenie in its actual release run at the BFI IMAX. (This makes Frankenweenie to 2012 what the Carlos The Jackal biopic was to 2010, and it's not often you can say that.)

In preparation for the exhibition, the previous evening we watched the half-hour live-action short film of Frankenweenie that Tim Burton made in 1984, which was the inspiration for this new stop-motion IMAX 3D feature. This means, of course, that I'm now in a position to compare the two. The basic story is still the same: small boy Victor Frankenstein loses his beloved dog Sparky in a tragic road accident. A day later, he learns in school about what happens to inanimate tissue when electrical current is passed through it. By the time the sun has gone down, Sparky has been exhumed from the pet cemetery, and trouble is about to happen.

The main way in which the film's been expanded for feature length is to give Victor a bunch of macabre mates who decide to try pet re-animation for themselves, with spectacular consequences. (The result achieved by Victor's Asian mate could be interpreted at one level as appalling racial stereotyping, if it wasn't so damn funny.) Burton has thrown in a neatly contemporary tweak to the plot, in that the townsfolk aren't so much afraid of the zombie dog as they're afraid of Science. He's also added lots of in-jokes for the grownups, with references to classic horror cinema and beyond. Sometimes, you miss the jokes because of the in-jokes: I spent most of the film assuming the tortoise was named Shelley after cast member Shelley Duvall from the original short, without actually considering that the tortoise had a shell.

It's the usual grim fun we've come to expect from Burton over the years, and even though the parade of monsters at the climax feels a little like padding compared to the short, there's plenty of that fun to be had. And the stylised black and white look has a lot to do with it, which leads us to the exhibit that's running at Southbank Centre till Sunday. It doesn't really acknowldge the presence of the earlier film, apart from noting in passing that it's based on an idea Burton had in 1984. It assumes the starting point is Burton's head, and the first display case has a terrific collection of his sketches, and the original puppets that were constructed from them.

Pride of place goes to three full sets from the movie - the attic, the bedroom, and the classroom, all showing a remarkable attention to background detail. Sadly, the sets are also dick magnets, and you're probably not going to be able to see much of them for all the dicks with iPhones taking pictures of themselves in front of them. There are also some video displays, but they feel more like a set of DVD extras on shuffle play - cast and crew interviews, and a selection of trailers (including one that lovingly recreates the BIG WRITING ACROSS THE SCREEN era of trailermaking). Still, it's a small yet entertaining exhibition, and it's free till Sunday if you hurry. 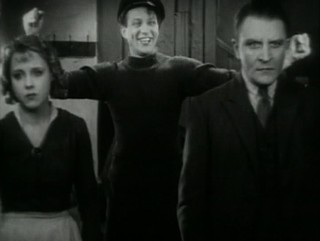 Well, that's the public domain for you. The Manxman is one of Alfred Hitchcock's great lost silent films, and has been out of copyright for so long that you can legitimately download it from The Internet Archive. Granted, the picture quality won't be as good as the restored copy shown at this Treasures Archive screening. And the image resolution won't be anything like as good. And it'll be at 25 frames per second rather than the correct 20. And you won't get to hear the lovely newly-commissioned score. And you won't get the usual bottle of water and bar of Green & Blacks. But at least you'll have saved nineteen quid.

Based on a hugely popular novel of the time, The Manxman's plot is a simple and familiar one. It's the story of two great friends: the lawyer Philip Christian (Malcolm Keen), and the fisherman Pete Quilliam (Carl Brisson). Pete is openly in love with innkeeper's daughter Kate (Anny Ondra): Philip also fancies her, but says nothing to protect his friend's feelings. When Kate's dad rejects Pete as not being good enough for her, he vows to go off to sea and make his fortune. "Look after Kate for me while I'm gone!" he tells Philip. And, um, he does.

From one small piece of deception, a whole web of duplicity builds up, one that's unlikely to leave anyone happy. As you'd expect, Hitchcock tells the story with a degree of sophistication that other people in British cinema simply weren't capable of at the time. His visual style is already bold, using dissolves and superimpositions to move the story along: it's particularly interesting to note how little he uses intertitles, at one point witholding them until the end of a scene to misdirect the audience over a major plot reversal.

These days, I only tend to do LFF gala screenings if they offer something well above what a normal commercial screening would give you. Unlike A Liar's Autobiography, we don't get Hitchcock impersonators wandering up and down the aisles before this film: instead, we have Stephen Horne performing his lushly romantic score with the aid of a small band of musicians. Always deeply melodic, frequently throwing in quotes from old hymns and sea songs to provide context, it's good enough that I'd buy it as a piece of music in its own right, even without the pictures attached. But with those pictures, we get a true sense of how gifted a filmmaker Hitchcock was before he even discovered the boom mike.