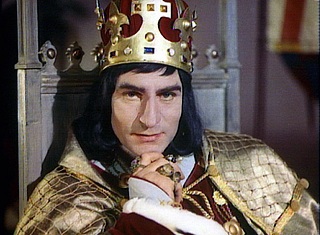 Don't believe people when they tell you that theatre no longer has the capacity to inspire. Why, only last month I went to see Richard III at Shakespeare's Globe, and it inspired me to see this film.

Tim Carroll's acclaimed production has only just finished at the Globe, but starts a run in London's West End on November 2nd. In Mark Rylance, I think it has the best portrayal of Richard I've ever seen, getting the balance of comedy and menace down perfectly. Watching it, I was reminded that I'd seen quite a few productions of the play over the years, but never actually caught the one everyone knows: Laurence Olivier's 1955 movie. When the Treasures section of this year's LFF announced that one of its highlights would be a restoration of Olivier's film, it seemed too good an opportunity to pass up.

Everyone knows the story: the rise and fall of the hunchbacked Plantagenet who deceives and murders his way to the English throne. And everyone knows the performance too, even if they haven't seen the film: the look and sound of Olivier's Richard has become the definition of the role since he captured it on celluloid, becoming an albatross for every subsequent actor wanting to make the part their own. Having seen a number of those actors - in the last year alone, the list includes Mark Rylance and Kevin Spacey - this rather lovely restoration offered an opportunity to compare them against the source.

The Belated Birthday Girl, on the other hand, has seen the Olivier film before, and warned me in advance: "you realise this is the Cibberised version, don't you?" And yes, in the opening credits, you're told up front that the film is based on Shakespeare with extra bits by Colley Cibber and David Garrick. Cibber - like the more famous Garrick - was one of those 18th century actor-managers who took it upon themselves to improve Shakespeare with their own rewrites. To someone who's only seen the original text being performed, the result appears incredibly dumbed-down. Extra scenes and lines have been added to bring things that were originally subtext crashing to the foreground: while favourite bits of business like the black comedy of Clarence's murder have been massively cut, presumably to reduce the amount of time that the lead character is offstage.

Cibber and Garrick made these sorts of changes to increase the appeal of the play to a popular audience: Olivier, presumably, realised that a film version needed to play to as many people as possible, and that's why he took their changes on board. But his all-star cast would have dragged the punters into cinemas as well. The leading roles are taken by theatrical legends: John Gielgud's Clarence, as noted above, suffers in the cutting, but Ralph Richardson's Buckingham still gets plenty of screen time, and is incredibly impressive as one of the few characters capable of standing up to Richard. It's also possible to spot lots of familiar faces in early appearances, from Clare Bloom as Lady Anne (who gives a delightful introduction to today's screening) to John Laurie as Lovell (who, sadly, never says at any point during the climactic battle "we're all dooooooomed...").

As for Olivier... well, this may be blasphemy, but I'd still say that Mark Rylance does the best Richard I've seen to date. Olivier can do the menace without a doubt, but - at least to a modern audience - there's a dark comic element to the character's delight in his own villainy, and all too often the actor stomps all over the funniest lines. But I have to admit that one of Shakespeare's most fiendish devices is to have Richard spend so much time justifying himself to the audience, and this is the part where Olivier manages the transfer from stage to screen brilliantly: his addresses to camera have an intimacy that draws us in and makes us all part of his conspiracy. He's not talking to the camera, he's talking to us - it's the part of the film that shows Olivier had a shrewd understanding of what works in the medium. 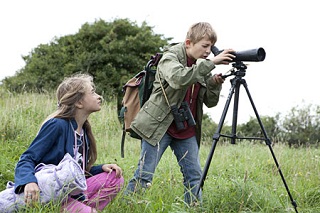 Clare Bloom has promised to appear after Richard III for a Q&A session, and we feel a bit guilty about running out of the screening as soon as the credits have finished: but we've only got half an hour until our next film starts, and we've got things to do. We grab a pint of spinach and ricotta rolls from the bar to share (if you were looking for a single thing to represent the good the BFI has done over the years, the pint glass full of sausage rolls or veggie equivalent would have to be it). We stroll down into the lobby of the cinema just in time to see Marion Cotillard arriving for her Screen Talk. And in the loos outside NFT2, I nearly get to have a wee next to Jonathan Romney. (Given his iffy programming choices last year, maybe I should have had a wee on Jonathan Romney, but there was already too much I needed to do in that half hour.)

The Great Bird Race - note that the onscreen translation of the Danish title is The Twitchers - is, to be frank, a bit of filler: we had Richard III in our schedule, and another film at 6.15pm, and this filled in the gap in between the two. It's our only choice this year from the Kids section, and it's interesting to see that a headphone narration option has been provided for the wee ones who aren't yet up to the challenge of reading subtitles. It brought back memories of the time about fifteen years ago where headphone translation was the festival's only way of coping with subtitling problems, where you'd have to sit with three-ton Bakelite monstrosities on top of your head while a bored BFI intern read from a script and tried to keep it in sync with what was on screen. These days, the headphones are dinky little wireless affairs - I was tempted to ask for a pair to find out what the bored BFI interns sound like these days, but decided to stick with the subs instead.

The hero of the film - well, I say hero... - anyway, our protagonist is young Victor (Oliver Methling Søndergaard), a young bird-watcher who lives with his dad Jesper (Lars Brygmann). His mum has run off with Stern, the father of Victor's bird-watching rival Daniel (Georg Hvidtfeldt Treschow). So when Victor and Daniel meet head-to-head in a 24-hour spotting competition, there's a lot of family pride at stake. And when it starts to look like Daniel will take the big prize, Victor has to decide just how far he'll go to win.

Here in the UK right now, we're all over Scandinavian crime drama - buyers from our TV channels are in bidding wars for anything from Denmark, Sweden or Norway featuring morally flawed heroes with a pragmatic attitude to right and wrong. Is it over-reaching to suggest The Great Bird Race is in the same sort of tradition as The Killing? Because this looks to me like a children's drama with as many moral grey areas as 1970s American cinema. A Hollywood kids' film on this subject would make it abundantly clear from the start that Victor's methods are wrong, and would certainly ensure that he would have been punished by the end of the story. Here, there's a lot more ambiguity in the telling: we're left to infer from the consequences that Victor shouldn't have done what he did, rather than having a final scene where Victor and his dad fatally crash their car while swerving to avoid a great eagle in the middle of the road.

It's interesting to see a children's film taking a rather adult approach to its leading character. Parents may take a different view, however. They may also take issue with the somewhat boysey nature of Christian Dyekjær's story, where the few female characters involved are largely there to cause trouble for the men with their flirtatious ways. But I'd imagine kids will have fun watching Victor's little deception explode into something enormous, and there are plenty of pleasures for the grownups too. Fans of The Killing will enjoy seeing series 2's politician, Nicolas Bro, having fun in a role filled with all the Spallness we've come to expect from him. They'll also enjoy all the hardcore Danish swearing we know and love from the show, coyly translated in the subtitles. Fa faen! 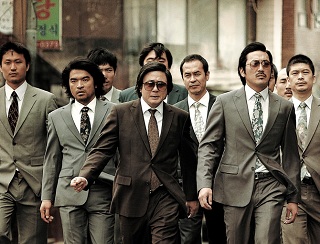 As noted in this year's intro, the LFF has expanded from its usual West End/South Bank base to encompass regular screenings in a number of out-of-town venues - rather than just doing one-off shows for the suburban audience, cinemas like the Screen On The Green are full-0n festival venues now. So we make a trip out to Islington to see how that works out. Quite well, in fact: the Screen's a lovely cinema, particularly after its most recent refurbishment, and it's just a shame that the random draw of the booking process didn't put us in one of their comfy sofa seats.

The film we see there, Nameless Gangster: Rules Of The Time, is a Korean gangster flick with all the knives and blunt instruments we've come to expect from the genre. We start in 1990, where a government crackdown on organised crime results in a rare trip to the nick for gang boss Choi Ik-hyun (played by Choi Min-sik from Old Boy). He's ordered to make a full confession for his crimes, which sounds like a framing story to me. Sure enough, we flash back to 1982, when Choi was working as a bent customs officer and suddenly came into possession of ten kilograms of dope. He teams up with one of his relatives, the criminal Choi Hyung-bae (Ha Jung-woo) to help him sell it on to the Yakuza. Their partnership grows into the founding of a full-blown crime gang - although if we're honest, it's Hyung-bae that does most of the work, while Ik-hyun brings little to the table apart from a web of business contacts and family members that he's built up over the years.

We get to see lots of Korean gangsters these days, and Yun Jong-bin's film does very little we haven't seen before, apart from telling the story from the perspective of a second division player. Although you could argue that it's a neat trick to make that second division player convinced that he's premier league, despite all evidence to the contrary. Choi Min-sik plays the role beautifully, so we're never quite sure whether his character is just playing dumb or actually the real thing.

Still, if you're a fan of the genre, you can't deny that Nameless Gangster is solidly made. And if you're just there for the violence, there's plenty of that too, with the fights realistically depicted as messily unchoreographed affairs. The one great joke in the film is Ik-hyun's hiring of yet another relative as a bodyguard, a taekwondo black belt who ends up getting twatted in every fight he's in. "They all rushed at me at once... if they'd come at me one at a time, I could have had them..."