Reviewed today: The Big Gundown; I Carried You Home; Long Live The Family! 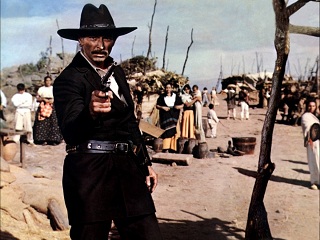 Well, that's me done for the year, I'm afraid. Pressure of work meant that I was always going to be finishing this final day early, but a last minute scheduling snafu meant that I had to finish even earlier than originally planned, to the extent that I had to ditch a previously-booked ticket for the 3.15pm slot. So without planning it, The Big Gundown has become my final film of LFF 2012. But given how strong the Treasures section has been this year, maybe it's fitting that I finish off with yet another restoration.

Clyde Jeavons makes no apologies for including a Western in each year's programme - "I like them" - and this one gives him an excuse to bring two more familiar faces on stage to help him introduce it. Restorer Grover Crisp does his usual spiel on the technical aspects of collating a definitive cut from multiple versions. Along the way, Crisp pays a touching tribute to Jeavons, claiming that no other festival programmer in the world would ask him to supply a Shakespearean tragedy, an Otto Preminger melodrama, Laurence Of Arabia and a spaghetti western for the same festival.

And as this is indeed a spaghetti western, we also have Sir Christopher Frayling to add a little informed background. Perhaps a little too much background? As he described the modern-day screenplay that was ultimately rewritten into this western, he let slip a plot point or two that I'd have preferred to find out for myself. Still, he's great on the way these films have been abused and misrepresented over the years, noting that when he first saw this Lee van Cleef film it was advertised with the slogan "Mr Ugly comes to town!" Which would be all well and good, except for van Cleef actually being Mr Bad.

Here, surprisingly, he's Mr Good, and talking dubbed Italian in this original language print of Sergio Sollima's fine film. Van Cleef plays Jonathan Corbett, who's single-handedly purged his town of bandits without asking for any sort of reward. As he starts to consider moving out of the dirty business of killing to go into politics, he's given one last job: track down a Mexican scumbag called Cuchillo (Tomas Milian), who's accused of raping and murdering a 12 year old girl. Cuchillo is as handy with a knife as Corbett is with a gun, and the chase will take them both from one side of the Mexican border to the other.

It's a great example of the genre, with all the cynicism, violence and mordant wit we've come to know and love, along with the side order of anti-authority politics that you find in all the best spaghettis. The plot feels a bit episodic in the early stages, and even in this fully restored version you find yourself wondering if a couple of scenes are still missing. But once the film crosses the border into Mexico, it all runs like clockwork. Frayling said in his introduction that he was looking forward to one of the most acclaimed scenes, a chase through a cane field, which wasn't in either of the versions he'd seen to date. Happily, the scene's in this version, and accompanied by a terrific piece of Ennio Morricone bombast. (In fact, it's a specific music cue that I've been carrying around in my head ever since it was used in a Hong Kong movie trailer nearly 20 years ago - I never knew where it originally came from until today.)

I'd agree with Clyde's opening statement, but with a small caveat - I like westerns, but especially when you get the rare chance to see them on the big screen. And having The Big Gundown stretched across the full width of Vue screen 7 is, indeed, a terrific way to close a festival. So now I'm going to bed at 4.30pm on Sunday afternoon (I told you I was having scheduling problems) - come back in a week or so, and we'll summarise the best bits of LFF 2012 in The Wrap Party.

I Carried You Home [official site]

The Belated Birthday Girl - Pann is a Thai high-school student living in Bangkok with her aunt. When her mother comes to visit, rather than spend time with her, she says she has a class: but instead she spends her day hanging out in amusement arcades, flirting with boys, and smoking cigarettes with her friend. She has an older sister Pinn, who now lives in Singapore, estranged from the mother. While Pann is hanging out with her friend, her mother has an accident from which she never regains consciousness. Pann gets a message to Pinn, who comes back from Singapore, but arrives after their mother has died. The two sisters have nothing to say to each other, but have to accompany the body of their mother by road back to her remote home town in the deep South of Thailand. Following the convention of road movies, this will be a literal and emotional journey for them both.

Introducing the screening, director Tongpong Chantarangkul said that not much happens in the film, and that it is more a film about the emotion rather than story. Visually, the film is frequently lovely, with much use of reflections and shallow focus, but for me the emotions didn't ring through as much as the director intended, and some of the attempts to add incident to the journey (centred on the character of the ambulance driver) felt grafted on. Still, this was a first feature, and if Chantarangkul can get as good a grip on narrative as he already has on the visuals, I would hope we would see more impressive work from him in future.

The Belated Birthday Girl - The combination of an exclamation mark in the title (although there is none in the orginal Czech title), and the main character in a banking scandal film being named Libor, made this an irresistable final film of this year's LFF for me. Although this Libor scandal is more of the standard embezzlement type, with Libor being the man who signs the dodgy cheques to non-existent companies. The film opens with him being told by the investigators that the other directors have all been arrested, and he has 24 hours to consider a deal. Libor takes that time to decide to take his family off on the run for a few days - or maybe more - telling his wife little of how much trouble he is really in.

Attractively shot in a subdued colour palate, Long Live the Family! takes an entertaining approach to telling this very contemporary family drama, in the form of a detective thriller where we are with the fugitive rather than the police. The story is told with a fair amount of wit and humour, as well as the tension of the chase: and while it manages to touch on issues of morality around financial misdeeds, it is also very much a tale of a family, and particularly of the couple at the heart of that family. It also has a great sense of time and place, with the many references to the Czech experience feeling organic to the story and characters.

In terms of the plot it does feel a bit like an extended TV drama, although a superior one. The characters are well drawn, with a real sense that they have lives outside of this story, and the performances are uniformly good. Special mention needs to be made of Igor Chmela as Libor, particularly his convincing portrayal of drunkenness. Long Live the Family! is a visual treat - you could almost imagine the Czech Tourist Board picking this up to promote the Moravian countryside the way In Bruges has been picked up on by the tourist board there - and an entertaining ride, making for a satisfying conclusion to my LFF.

That didn't last very long then.

Well, I warned you at the start that they'd lopped four days from the festival's length this year. It didn't feel massively truncated at this end - in the past, the last four days tended to tail off a bit in terms of movie quality, and I don't think that happened here.