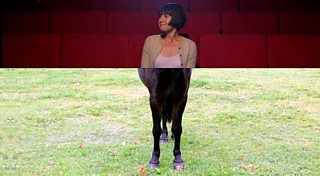 You've probably noticed that there haven't been many contributions from Spank's Pals during this year's London Film Festival reports: put it down to a combination of family pressures, work commitments, and some people deciding they're not living in London any more. But no matter - here are The Belated Birthday Girl and yours truly (plus a brief bonus appearance from Grizelda) to tell you about the highlights and lowlights from what we saw this year. 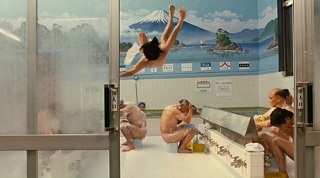 Bubbling under (in viewing order):
Wadjda, Mahanagar, Chakravyuh, Heat Lightning + Jewel Robbery, Village at the End of the World, The Manxman, Japan in a Day, The Big Gundown

Not for me:
Solar Eclipse

A shorter festival this year, so a smaller number of films seen. Total of 34 films (including Frankenweenie, technically seen outside the festival), one exhibition, and one masterclass. I suspect the shorter duration was forced upon the organisers, so I can't hold that against them. But the geographic spread of the films did mean I missed out some specific films I would have liked to see, which did not have a convenient central screening (although I concede it may have benefitted the festival as a whole, with record ticket sales reported). Although I didn't see anything I thought was really outstanding, I also only saw one thing I actually didn't like. So I guess that counts as a good festival.

The fact that three of my top 5 came from Japan may in part just reflect the number of Japanese films I saw (5 out of the 34) but that isn't the whole story, as I saw the same number of Korean films - only one of those made it onto the Top 5, and the final spot was taken by the only Swiss film I saw. That Swiss film was also the best documentary I saw, although it was not part of the official documentary competition, and was filed in the meaningless "Journey" strand. It certainly didn't hurt that two of the Japanese films were by two of my favourite Japanese directors (Miike and Kenji Uchida).

A special mention needs to be made of the "Treasures" strand of archive films ("Treasures from the Archives" used to be a better title for this section, but obviously didn't fit in with the new "themes" approach). I saw 6 films (7 if you count the 2 pre-code films separately: I count them a 1 in that overall 34) in this strand, and all bar one (Richard III) were wonderful. Lawrence of Arabia is one of my all-time favourite films, and as such I don't feel able to judge it against anything else in the festival. It was a delight to see it again, and especially looking so beautiful in its cleaned-up state. I really would recommend that anyone who has never seen this on the big screen should do so when it gets its re-release.

Some great guests at this years's festival, with top place shared between the Pythons, choir and "Graham Chapmans" at the gala of A Liar's Autobiography, and Omar Sharif and Anne Coates at Lawrence. And a lovely tribute by Grover Crisp to Clyde Jeavons at The Big Gundown. I also really enjoyed the Wasco masterclass: I could happily have listened to them for hours, and I would have loved to have heard more about their work maybe on smaller films and with less well known and idiosyncratic film makers, as well as the fascinating and entertaining things we did hear.

I've already had my say about the new way of organising the festival by "themes". I didn't warm to it any more by the end. One other thing I think was a shame about the organisation of the festival this year was the lack of space at the end for "TBCs" to repeat popular films or competition winners - although I don't think I would have gone out of my way to see any of the eventual winners this year anyway. I suspect this was also a result of the time-compressed festival, and so probably couldn't have been helped. But it was a pity nonetheless.

I will be interested to see whether any other changes come in next year, whether for the better or the worse. I just hope that in the push to make the festival more popular, those of us who have been supporting it for years (and I know that many out there - hello, Spank! - have been supporting it many more years than I have) don't get forgotten, and if more changes get made, some get made to help us to continue to see a large number and wide range of films. 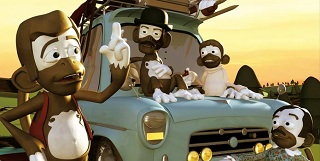 Just a few comments re A Liar's Autobiography. I thought it was like the curate's egg: good in parts. The animation throughout was fantastic and the story of Graham Chapman's early years was very interesting. I was just disappointed they didn't go into depth more about the Monty Python years, the controversy surrounding The Life of Brian, and indeed more details about how the Monty Python team came up with the ideas for their sketches and how they worked them all out. I would also have been interested to know more about Chapman's final years. 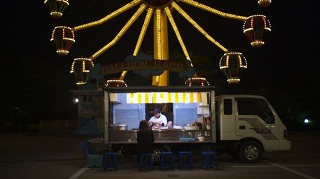 Putting those categories to use, here's what I saw this year:

I don't share The BBG's mistrust of the Stewart Classification System: as far as I'm concerned, it's just another way of breaking up the programme so that it isn't simply a gigantic A-Z list of movies. It certainly didn't have any impact on how I chose the films I saw this year, because I'm prepared to give anything a shot. Any categories with a zero against them were just ones where I didn't have time to see the films in them. That particularly goes for Sonic and Shorts - the music and animation programmes have been personal highlights of previous years, and only pressure of time stopped me from catching anything in them. The shorter timeframe did have its advantages, though: there wasn't the feeling of a tailoff in quality in the final few days that previous festivals have had.

In terms of that quality, it was generally a solid festival for me, with nothing really hitting the extremes of brilliance or craposity. The closest thing I have to a favourite film this year is Romance Joe, in which Lee Kwang-kuk took a bunch of ideas from his mentor Hong Sang-soo and made a heady post-modern stew out of them. The rest of my top five is taken up with a geographical spread of entries from Japan (Key Of Life), America (Francine), Switzerland (Winter Nomads) and the UK (Village At The End Of The World, and I haven't just picked it because they've namechecked me on the official site, honestly). No real worst films to speak of, although there were disappointments in the two patchy Asian portmanteaux (Doomsday Book, Beautiful 2012) and the not-as-much-fun-as-it-would-like-to-be The Great Kilapy.

So, all that's left for the year are the thankyous. To the Pals who wrote things (The BBG and Grizelda) and the ones who didn't (Lesley, both Carolines, Jon, Ela and Old Lag): to the veterans of previous campaigns missing in action (The Cineaste and Suzanne Vega Fanclub): to the Mostly Film posse, including Mr & Mrs Malcotraz, FilmFan, Das Boot, Max Fischer and Calamity: to you lot for reading all this nonsense for another year. And, last but not least, heartfelt thanks to Clare Stewart and her team for not breaking the London Film Festival in their first year. Though if there still isn't a Festival Catalogue published in 2013, you'll have me to answer to. Being a monkey, and all.