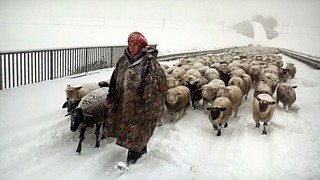 Your new word for the day is transhumance. "Transfer of livestock from one grazing ground to another, as from lowlands to highlands, with the changing of seasons," says The Free Dictionary. Based on my limited experience of the activity - i.e., this film - that seems as good a definition as any. Manuel von Stürler's documentary follows two shepherds as they herd 800 sheep, several dogs and a couple of donkeys across snow-covered Switzerland for the winter, looking for spots along the way where the sheep can feed. As there's no voiceover, we're reduced to eavesdropping on the conversations of Pascal Eguisier and his younger partner Carole Noblanc for any information: what they're doing, why they do it, who they are.

It's a sad sign of the times that more and more, when we watch documentaries, we find ourselves trying to work out how much of what we're seeing is faked, or at least staged for the camera. And it doesn't help when a film like Winter Nomads has a couple of people sharing a screenplay credit. My suspicion is that to ensure that there's little visible directorial commentary or influence in the film, von Stürler has set up a number of meetings along the way with apparently random passers-by, allowing their conversations to answer some of the viewer's questions about what's going on.

So near the start of the journey, a young girl they meet effectively becomes Mademoiselle Basilic Exposition, allowing Pascal to explain the concept of transhumance and also remind us that the sheep we're cooing over are being fattened up for slaughter. A pair of farmers whose field the flock passes through provide an interesting counter-argument, that what we're watching is actually a gang of organised grass thieves. And an open-air fondue party finally gives us a few tantalising hints into the personal background of Pascal and Carole.

But here's the surprising thing: after a while, you find that you don't actually care how much of this has been staged or not. Because if it turned out that Pascal and Carole were actors and this was a fiction feature, it would still be an incredibly lovely film to watch. Shot largely against the background of the snowy fields, the sight of a large number of sheep roughly conforming to fluid dynamics is quite something. And the interaction between the two shepherds adds another layer of interest: is this a master/apprentice relationship, or is there something else going on? Winter Nomads is an utterly charming film, showing a side of life us city folk rarely care to think about, and it's definitely a cut above your standard nature documentary. 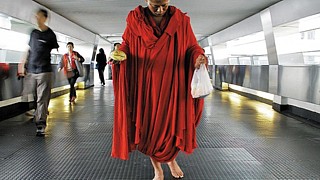 You used to see portmanteau films from all over the place at festivals: these days, only Asian countries appear to make them. Last week we had the Korean film Doomsday Book, which collected three stories of the end of the world. Now Beautiful 2012 assembles four major directors from China, Hong Kong and Korea, but doesn't appear to give them a common theme to work with, apart from - at a pinch - the one implied by the umbrella title. Portmanteaux are perhaps the best way of getting short films into theatres, as the main medium for the 20-30 minute story these days is the internet. In fact, the producers of Beautiful 2012 (along with the Hong Kong International Film Festival) are Youku, the Chinese equivalent of YouTube. This means that if you follow the 'official site' link above, you can actually watch these four shorts online right now if you're curious. You may not be so curious after reading this, though.

The first film of the four is easily the most entertaining. Kim Tae-yong's You Are More Than Beautiful is built around a well-worn comic situation: a young man hires a girl to pretend to be his fiancee, to impress his father without having to go through the unpleasant business of actually getting engaged. There are a couple of twists to the situation, though: the father is on his death bed, and the girl is a porno actress who decides to take her new role much more seriously than anyone expected. The story takes a couple of unexpected turns along the way, and it ensures that this collection starts with a guaranteed crowd-pleaser.

Which makes it all the more brave that Beautiful 2012 follows it up with a potential full-throttle crowd-annoyer. Tsai Ming-Liang has always had a reputation for making films that are a tad on the slow side (previously: Goodbye Dragon Inn, The Wayward Cloud). If you wanted a comic shorthand for his signature shot, it would involve someone entering the frame very slowly from one side, and not cutting away until they'd exited from the other side. Tsai's short Walker abstracts that idea to the levels of slowness we'd associate with art filmmakers like James Benning. We watch a sequence of shots of the bustling streets of Hong Kong, as a red-robed monk walks through them at a literal snail's pace, largely (but not always) ignored by passers-by. Hong Kong's my favourite place on earth, as you may know, and I like Walker as another way of looking at it: the contrast between the speed of the city and the speed of the monk make it hypnotically fascinating to watch.

Unfortunately, from there it's all downhill, and the latter two sections of the movie can be dismissed in a single paragraph. Gu Changwei's Longtou is more crammed with incident than Walker, but somehow manages to be more boring: its digressive approach to the topics of China's birth policy and the end of the world may have more impact to a home audience, but it fails to grab the attention here. Finally, Ann Hui's My Way harks back to the first short with its more traditional approach to storytelling, as it follows the plight of a married man who decides that what he really needs to make himself happy is gender realignment surgery. It's a story told with Hui's usual careful attention to human detail, but it's a little disappointing compared with her LFF hit from last year, A Simple Life. Two out of four's not a bad hit rate for a portmanteau, but the trick is not to start with those two. 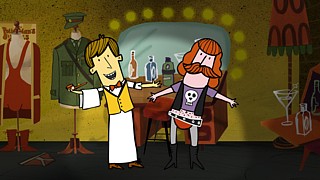 In the early evening, the LFF is holding its Centrepiece Gala, marking the halfway point of the festival. Hyde Park On Hudson is also the Mayor Of London's Gala, which means that the delight of getting to share a cinema with Bill Murray is counterbalanced by the horror of also having to share it with Boris Johnson. So Grizelda, Caroline, Stephen, The Belated Birthday Girl and I decide to have our own mid-festival celebration at the Cork & Bottle wine bar. As The BBG points out, this could be considered tasteless, given that we're all going from there to see a film about a man described by the director as 'openly gay but secretly alcoholic.'

A Liar's Autobiography - the movie version of the life of Monty Python's Graham Chapman - is one of our few galas for the year, and as an event we certainly get our money's worth. You'd bloody hope so at twenty-five quid a ticket. A couple of surviving Pythons (notably Michael Palin) can be seen meeting and greeting punters on the red carpet. There's free water and chocolate sitting on the armrests of our seats, although there's still no definitive statement on the protocol of whether you're meant to take the goodies from the left armrest or the right one. Several Chapman impersonators are prowling the auditorium, berating us for being silly or insisting that we're all individuals. (The one audience member who yells back a perfectly timed "I'm not" gets a round of applause.) And in the best surprise of the evening, halfway through the film itself, fifty members of the London Gay Men's Chorus stand up in front of the screen and join in with the song Sit On My Face. Your chances of any of this happening when the film reaches your local Odeon are precisely zero. Sorry.

Chapman's retelling of his life story is a notoriously patchy book, with five co-writers visibly battling for supremacy throughout. Bill Jones, Jeff Simpson and Ben Timlett have successfully managed to adapt it into an equally patchy film, thus retaining the ramshackle charm of its source material. It takes as its starting point a reading of the book by Chapman himself, with additional voices by all the remaining Pythons who aren't Eric Idle. This audio retelling has then been farmed out to 14 different animation studios, who've taken a sequence or two apiece and illustrated them in a variety of contrasting styles (and all in 3D to boot).

The most astonishing achievement of the movie is that all these styles co-exist without cancelling each other out. From the cute claymation monkeys representing the Python cast, to the nightmarish painted hell of his drying-out period, the directors somehow manage to keep a coherent flow to the film, and it all hangs together as a piece visually. Whether it all hangs together dramatically is another matter entirely - some sections feel a bit self-indulgent and over-extended, and even at a tight running time of 82 minutes there are a few dull spots.

The episodic nature of the animation encourages you to judge A Liar's Autobiography on a sequence-by-sequence basis, and I think that's a mistake. Because if you take the film as a whole, all those sequences add up to an affectionate tribute to a very funny man, whose delightfully self-deprecating narration sadly runs dry a few years before his untimely death in 1989. Terry Jones gets a little sentimental in the post-film Q&A, saying that the film brings Chapman back to life, and I think there's definitely something in that. Surprisingly, it's left to Michael Palin to bring a little dark cynicism to the party: "it's amazing the lengths someone would go to, to get himself the first solo Python film..."