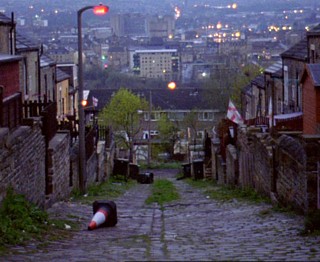 6.00pm: The Poor Stockinger, The Luddite Cropper And The Deluded Followers Of Joanna Southcott [clip]

Yeah, sometimes all you need to attract viewers is a catchy title. The Poor Stockinger, The Luddite Cropper And The Deluded Followers Of Joanna Southcott - or as all the cool kids are calling it, TPSTLCATDFOJS (terpustelcatdefojes!) - can be considered a NEW THRILL! for a couple of reasons. Firstly, it's part of a full evening's programming running alongside the Opening Gala, which is something that's never happened before. (You could even argue that this is the real Opening Gala, starting as it does a full hour before Frankenweenie at the Odeon Leicester Square.) And secondly, it's part of a new strand of experimental films being premiered at the ICA, which is a natural home for the more esoteric end of art cinema.

As part of this enhanced focus on the Experimenta section, this screening is preceded by a 20 minute lecture from Dr Tom Steele, a former tutor for the Workers' Education Association. Steele talks at length about the history of the WEA, a left-wing organisation set up to bring adult education to the working classes. His particular focus is on the work performed in that area by the historian E.P. Thompson, who's the subject of this film as well as the man responsible for its epic title (referring to the sort of people he hoped to enlighten).

As Steele's talk progressed, I started to worry that he was giving away too much of what was in the film before we'd even seen it: but it turned out I was wrong. Luke Fowler's movie is in the Experimenta section for a number of reasons, and the main one is that this is effectively a gallery piece (commissioned by The Hepworth Wakefield) which assumes you know all this historical backstory before you see it. Without that knowledge, it's just a piece of esoterica, like those early Peter Greenaway shorts that are like scientific reports read out over landscape photography.

Here, Fowler's source material is a series of reports Thompson wrote during the 50s and early 60s, documenting the progress of the various adult education classes in history and literature that he taught in Yorkshire. They're overlaid over archive shots of the towns he taught in, mixed with footage of what they look like now. There's actually a lot of ironic humour in the distance between Thompson's expectations of his working class students, and what he actually encounters in the classroom: he becomes despondent at how all too often in history classes, the students become bogged down in their own personal reminiscences, rather than getting fired up to change the world.

Intercut with this is a separate report Thompson made on the standards of teaching in general, and history teaching in particular: his conclusion being that it's pointless to pretend that any history is objective, it's always coloured by the person recounting it. To that end, Fowler does everything he can to remind you that you're not watching a historical document, you're watching a film made by a person (or more precisely, by a Turner Prize-nominated artist). Disruptive picture and sound editing: over-exposed flashes at the end of shots: and, most delightful of all, a hesitant and idiosyncratic reading of Thompson's reports by the non-actor Cerith Wyn Evans. Evans turns out to be the film's secret weapon - you could listen to his voice for hours, even as he stumbles over his words and complains about Thompson's syntax.

I'm never entirely convinced by films that require a large amount of prior knowledge for you to appreciate them fully: and Fowler's film is possibly carrying just too much conceptual baggage in its structure for its own good. But if you can get past all the arty trimmings, underneath them all is a smartly impressionistic portrait of the left's attitude to the working classes in the fifties, hovering just on the dividing line between aspirational and condescending. Which is underlined perfectly by a hilariously uncomfortable post-screening Q&A, whose highlight is a current WEA student asking a question made up entirely of unconnected mixed metaphors. "William Blake was an immigrant! There's no sunlight coming through the church windows! You're just venerating the disease!" The response from the panel on stage is "Does anyone else have a question?" I think I was the only person who found that funny. 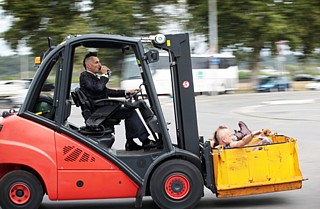 Regular readers will know that there are certain directors I always associate with the LFF, and Benoît Delépine and Gustave de Kervern are definitely two of those. They first appeared at the 2004 festival with Aaltra, where they won over the audience instantly though the simple method of turning up pissed to their Q&A. A number of their films have screened at the festival since then, but in recent years they haven't bothered coming along with them, which is a bit of a shame. Because I'm starting to think that the Q&As were really the things I liked most about their films.

Le Grand Soir is the story of two brothers. Benoît (Benoît Poelvoorde) is an aging punk rocker living on the streets with a dog on a string, preferring to go under the name Not. Jean-Pierre (Albert Dupontel) has a family and a proper job selling mattresses. The two only meet on the rare occasions that they happen to both be at their parents' restaurant at the same time: they live completely different lives and have nothing in common. It's probably not giving away too much to suggest that this state of affairs is about to change.

It's interesting to see a theme developing in D&K's last few movies. From Louise-Michel through Mammuth to Le Grand Soir, their focus has been on people who've found themselves at the sharp end of the economic downturn, and how it's forced them to make tough decisions about their lives. And for the first half of the film, as Jean-Pierre's life slowly begins to fall apart, Le Grand Soir is one of their most intricately balanced tales of the new Depression. There's a bleakness to the story that makes itself keenly felt in between the gags, at the most unexpected moments. Poelvoorde and Dupontel's fine performances in the roles of the two brothers make this all completely believable, and they're well supported by the other members of the cast (including the odd surprise appearance from some of D&K's previous collaborators).

But Mammuth had me worried that D&K were starting to get soft in their old age, and Le Grand Soir just compounds those worries for me. I should have been warned early on by the presence of 8-6, Not's overly cute dog on a string, who's presumably there as some sort of post-Artist audience-charming device. But there's a more fundamental problem to the film's structure: after Jean-Pierre hits bottom, the story doesn't really have anywhere to go, and ends up coasting purely on the chemistry of its leads. Sure, it wouldn't be a D&K film if it didn't have at least one moment of outrageous black comedy, and the one we get here - involving the brothers' encounter with a suicidal farmer - is a corker. (Disclaimer: this was the second time today that I found myself the only person in the room laughing at something.) But in the past, we would have got more than one moment like that.

There are lots of individual moments to like in Le Grand Soir, but it never quite comes together as a whole. Despite its heart being clearly in the right place, it doesn't really seem to have a lot to say, and after a great first half it meanders all over the shop before collapsing into the anti-climax sarcastically hinted at by its title. I still have a soft spot for D&K's work, but maybe they need to come back to the UK some time and persuade me in person.