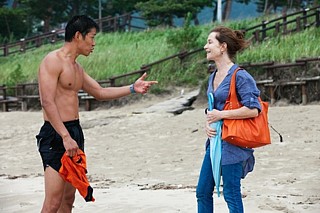 Vue West End, Screen 7! 411 seats! This is, I believe, the largest room in which I've ever seen a Hong Sang-soo film. I've been following his career at the LFF on and off since 2004, and I think he's one of those filmmakers that I've learned to love over time, as I've come to spot his techniques and obsessions. The larger room may have got him a bigger audience, as may have the presence of a Western star: certainly it sounded like at least a couple of people in the row behind me had come because of Isabelle Huppert, rather than the director. It'll be interesting to see if they come back next year.

Meantime, this year, In Another Country establishes itself as a Hong Sang-soo film pretty damn quickly. We start off on a hotel balcony, where a mother and daughter are complaining about how the irresponsibility of a relative has driven them out of their home. It's a solid setup for a story, and Hong proceeds to do precisely nothing with it. Instead, the daughter occupies herself in the hotel by writing a screenplay set there, inspired by a French woman she met at a film festival. In its first scene, Anne (Huppert) is warned to watch out for broken bottles on the beach, left there by drunk Korean men. We're only five minutes in, and the standard Hong themes of characters in the film industry, multiple levels of reality and overindulgence in soju liquor are already in place. All we need to complete the set is a repetitive story structure, where the same events happen with variations several times in a row. Don't worry, that's coming.

Hong's fondness for warped romantic comedy is also evident, as much of the narrative involves Anne's relationships with a number of Korean men, most notably a lifeguard (Yu Jun-sang) with his own tent and an ear for a tune. Typically, the misunderstandings in a Hong romance are fuelled by booze, and inevitably that's frequently the case here: but there's also a level of comic misunderstanding that comes from the Korean and French characters only being able to communicate in English, meaning huge swathes of dialogue involve people trying to say important things in their second language.

Hong thankfully avoids the usual fish-out-of-water cliches, and instead focusses on things that an outsider to a foreign culture frequently notices. The awkwardness the Koreans feel when they realise they're talking in Korean behind Anne's back, even when it's benign: the glorious overenthusiasm the lifeguard feels when he's able to say a few words of broken English to Anne: the way someone trying to understand a foreign language listens to an entire sentence and latches onto the one or two words they understood in it. All this is stuff that's happened to me in the last couple of years on my business travels, and for me it adds a layer of extra enjoyment on top of all the drunken romcom we've come to know and love from Hong. 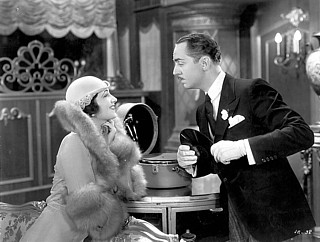 Of all the movie books I own, this is the one with my favourite cover. It's an attempt to depict all of the good things in movies that Hollywood couldn't get away with after the Hays Code was brought in in 1934. Nowadays, there's been a surge of interest in the films made in the seven years between the introduction of sound and the implementation of the Code, looking at the stuff they did while they were still allowed to. Clyde Jeavons has been presenting restored movies from the pre-Code era for the last couple of festivals: this is a double bill of Warner Bros pictures, both tight little pieces running just over an hour, and quite different from each other.

Heat Lightning takes the time-honoured approach of putting lots of pent-up desires in a hot place and watching them boil over. Here it's a service station in the middle of the desert, run by two sisters: the femme Myra (Ann Dvorak) and the decidedly butch Olga (Aline MacMahon). Myra is angry at the way that her older sister stops her from having fun - but Olga has a past herself, one that comes to light when a pair of on-the-run-looking gentlemen come to visit. It's a standard melodrama that wouldn't turn a hair these days, with risque flirtation ultimately climaxing in violence. Probably the most interesting thing about it now is that you're not told Myra and Olga are sisters initially, leading you to make all sorts of assumptions about their relationship.

Jewel Robbery, on the other hand, is a much lighter affair, and it's possible that its lightness may have made it even more of an outrage to decent society. We're told early on that a master thief is robbing the jewellers of Vienna, so our expectations are set for an edgy crime picture: but once William Powell walks into a shop brandishing a gun, we know it's not going to be that sort of movie at all. He's utterly charming during his robberies: always polite, working to classical music, never resorting to violence when he can persuade his enemies to smoke his funny cigarettes instead. ("He'll wake up in the morning perfectly refreshed, but with a ravenous hunger.") How could a society dame like Kay Francis do anything but fall for him, even when he's stolen her best ring?

If you're expecting a story with the message that Crime Does Not Pay, you need to look elsewhere. The tone of Jewel Robbery is frivolously amoral throughout, with some beautifully witty lines. "I would deceive a husband for a ring like that," says one woman. "Oh, I would do more than that," says her friend, "I would tolerate a husband."  It's typical of the fluid attitude to morality that makes these pictures so fascinating now, and made them so popular back in the thirties, when audiences were in the middle of a depression and keen for stories of people making it rich by any means necessary. Clyde Jeavons is promising a whole season of this sort of thing at BFI Southbank next year: I'm looking forward to it. 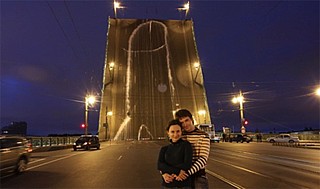 For the first twenty minutes or so of this documentary, Oleg, Koza and little Kasper are your typical Russian nuclear family. Well, sort of. They're living in poverty, stealing food from shops and raiding skips for clothes and toys. And then there's the small matter of their nocturnal activities, where they go out with several mates and attempt - largely unsuccessfully - to overturn parked cars. It's only after a couple of reels of this that Oleg gives the one explanation that he feels can completely justify what they're doing. They're artists.

They're part of a movement called Voina, which uses a series of art pranks to draw attention to the problems in Russia today (similar to the group Pussy Riot, whose protests have been reported more globally). The pranks could be as simple as filling the locks of government buildings with chewing gum: or they could be more complex ones like the car flipping, which is revealed to be a rehearsal for the ultimate aim of overturning a police car. In European terms, they're Situationists, where the reaction to their art is more important than the art itself. But when a video of their police car 'action' goes viral, the reaction escalates out of all proportion.

Andrey Gryazev's film starts off with a disclaimer guaranteed to freak out anyone concerned with realism in documentary - it proclaims that this isn't an historical document, and that not everything depicted in it happened in reality. It could be more Situationist tomfoolery, designed to make us uncertain as to what's real and what's staged: or it could just be legal arse-covering, given that the film records several instances of the law being broken. Either way, it makes for very uncomfortable viewing. You may feel queasy about Voina's methods (especially the involvement of Kasper), but the police reaction will make you even queasier, and for this English viewer it was sometimes hard to grasp an overall point of view.

But Gryazev raises an important point in his post-screening Q&A - this is a specifically Russian response to specifically Russian issues. He's fully aware, for example, that if they'd flipped a cop car in the US they would have been shot. In Russia, it's not just important that the overturning was a symbolic insult to authority: it's also important that the police are so crap, it took them four days to realise it had happened.

A resistance movement that works in the medium of satire and pranks is always going to get a good reaction in the UK, and beside the serious political point there's a lot of enjoyment to be had with Tomorrow. That's especially true of the spectacular Liteiny Bridge action which forms the film's climax, and gets a spontaneous round of applause from the LFF audience. ("I now understand English humour," comments a deadpan Gryazev.) Although you can't help but wonder just how much can be achieved with pranks: the director reports that in the months since he completed the film, Voina have moved up to setting police vans on fire, which is less fun.

The Belated Birthday Girl - Solar Eclipse is an observational documentary, which follows two Czech engineers, Milan and Tomáš, as they travel to a Zambian village to repair a solar energy system which they installed four years earlier, but which has fallen into a very poor state. We take off from the Czech republic with Milan and Tomáš, follow them while they are in the village, and fly back with them at the end of the film. While they are in the village we hear from the school teachers of some of the benefits that having electricity has brought them, but we also see that misuse of the system has left it in a mess, and the full benefit of it is not being realised.

It is a film in part of a clash of cultures, and we are certainly taken in on the side of the Czech engineers: we arrive with them, we leave with them, and we have no interactions with anyone without them. The film makes sometimes uncomfortable viewing, and although it could be seen as raising questions of the role of developmental aid and the responsibilities of both the donors and reipients, there doesn't really seem to be much point to the film beyond following Milan and Tomáš on their trip. The director descibes it as "situational realism", but the situation we are observing is a very limited one, and we are not neutral observers.

Not every documentary film has to be uplifting or energising, but I found the experience of watching Solar Eclipse largely a dispiriting one, and I don't really see the point behind it.