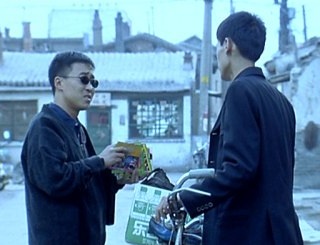 The first film in the trilogy is Xiao Wu (aka Pickpocket), made in 1997 and using the imminent handover of Hong Kong back to China as one of its reference points. Fancy seeing a trailer with an intrusive watermark and Spanish subtitles? Well, tough, it's the best one I could find.

In 2000 came Platform, which tries (and, as far as I'm concerned, doesn't quite succeed) to cover the whole of 1980s Chinese history in its story of a group of travelling performers. It looks lovely, though. This lengthy clip from the Cinema Poetry video blog includes the sequence that gives the film its title.

The last film in the trilogy is Unknown Pleasures, made in 2002 but set a year earlier. The trailers I've found online all seem far too keen to give away the ending. So here's a nice chunky clip from the middle, which proves I wasn't making up what I said in the article about the film's use of Western-friendly movie references.

And one more bit of video to finish off. I mention Madness' drama-doc Take It Or Leave It in my discussion of Xiao Wu, in the context of how interestingly erratic the results can be when you use non-professional actors. (Let me make that clear: not bad, but erratic.) I don't normally approve of this sort of thing, but as the film's currently out of print, I think this is the best way of illustrating my point...