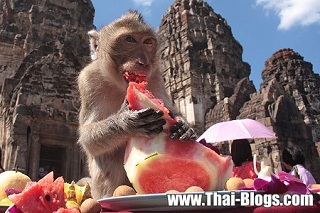 In the meantime, your Simian Substitute Site Of The Month for November 2012 is Lopburi Monkey Festival, or at least a blog about it written by Richard Barrow. It happens in Lopburi in Thailand on the fourth Sunday of every November, so there's one coming up on November 25th this year. For over two decades, the boss of the Lopburi Inn Hotel has been setting up open-air buffet tables once a year as an offering to the macaque monkeys who roam the town. Chaos and messy eating inevitably ensues. See Richard's blog for a full description with pictures, and have a bonus video if that's whetted your appetite.

The start of November means that it's nearly six months since our most recent visit to Japan, which seems good enough as a self-imposed deadline to finally start writing about the bloody thing. Feel free to berate me in the comments box below if I don't start putting up some travel articles in the next few weeks.

Never been a fan of, or quite understood, the whole Simian Substitute Monkey thing you have been doing since the dawn of the internet. Pointless joke, drawn out to infinity, which only you get/write/read (I await the backlash from your legions with interest).

My point being, that it is a refreshing change to see you do a general summary of the cultural month (as you have consumed it). Always enjoy reading such stuff, and is often easier to get down, when things don't sit within an overall theme. More please !

For my part I haven't seen Skyfall yet, as the other half had already done so with her friends. Therefore went to see ARGO instead (a Ben Affleck thriller). Actually despite that obvious handicap, it was really rather good, and based on a true story, yadda yadda......

Argo Fuck Yourself (see the movie).

Um, you do realise I've been doing these monthly summaries for nearly three years now, don't you?

But yeah, the Simian Substitute Site has been there since day one, and was a consequence of the site originally being hosted on Demon. They had a bee in their bonnet about having potentially dodgy content on your homepage, so I made sure I had a link to a family-friendly alternative easily accessible, and changed it on the first of each month to keep things interesting. There's less need to do that now I'm with Typepad, but it's nice to have something in quiet periods (like, say, this one) that forces me to write something at least once a month.

I'm also a fan of the Ben Affleck film, and have suggested to the high street chain that Argos: Fuck Yourself should be the slogan for their Xmas ads this year.

Three years ? Right well I'm going to check that.....
Anyway even supposing you're telling the truth, it proves my point..... well sort of. Well namely then, that your monthly review (if it really does exist) is being buried under something that most people are not going to get/look past.

However that said I can understand the historical family friendly link thing that was a part of the internets past. Therefore to prove I am a team player, I am giving you next months link free of charge http://www.youtube.com/watch?v=6pFN7HgDRiU