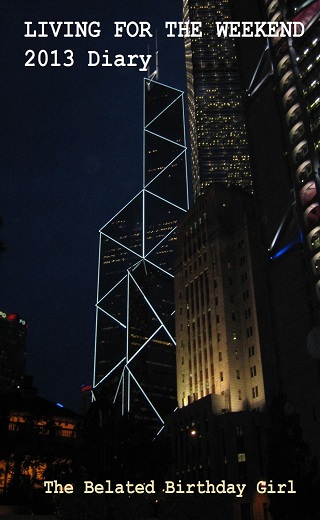 If you were here last year, you remember the story. The BBG was irritated at the way many two-pages-to-a-week pocket diaries treat the weekend as an afterthought, giving Saturday and Sunday around half the space dedicated to the other days of the week. So she played around with Word templates for a bit and came up with Living For The Weekend: 2012 Diary, where more space is given to those weekend days where you've got fun things to write about. (The 2012 Diary is still available, and for a limited period you can pick it up at a terrific 15% discount.)

The 2012 diary was done in a bit of a mad rush during Christmas week, and as such it has a few obvious flaws. The major flaw was that it wasn't available until after Christmas, thus reducing its potential as a handy stocking filler. But it's also short of a few things that you take for granted in regular diaries - calendars, notes pages, transport maps. Time constraints meant that those things couldn't be fitted in, but The BBG vowed to address those issues if she ever did another one.

Well, she's done another one. Living For The Weekend: 2013 Diary is available right now, so there's still plenty of time to order copies for Christmas from our lovely publishers at lulu.com. (Yes, that's our lovely publishers.) New features for 2013 include the following:

All of this extra material makes the 2013 diary a full nine pages longer than its 2012 equivalent: but Living For The Weekend: 2013 Diary is available at the same bargain price as last year, just £3.99 plus postage and packing. At the time of writing, Christmas is just three weeks away: so order now to avoid disappointment. (Fans of disappointment may prefer to look at my own books, as listed in the left hand sidebar of this page.)