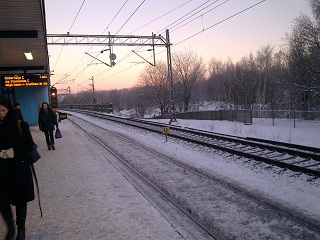 Remember January 21st? That was the Monday after the UK’s big cold snap, when tons of snow fell in a few hours and destroyed our transport system, as usual. This would seem like a bad day to have to leave the country, but things actually worked out surprisingly well. Yes, Heathrow Airport had ground to a virtual standstill – but I was leaving from Gatwick, which is much better equipped these days to cope with snow. This wasn’t by choice: I’d just chosen to fly out to Sweden by an obscure cheap airline, and they were based at Gatwick.

So hooray for Norwegian Airlines. No, I hadn’t heard of them before either, but they’re good. OK, so they’re one of those budget airlines who charge you for everything from checking in a suitcase to drinking a cup of tea, but a return flight from London to Stockholm cost me around two hundred quid, which was a bargain compared to what other airlines would have charged. And everything departed and arrived exactly to plan – if anything, the one scary bit about the journey was the two hours or so it took to get from Victoria Station to Gatwick Airport, thanks to snow delays on the Gatwick Express.

Once you arrive at Stockholm’s Arlanda Airport, you’ve got a few different options for getting into town. There’s a high-speed train called the Arlanda Express, but it’s almost as shockingly overpriced as its Heathrow equivalent, with a single journey costing 260 SEK (just over £26). There are also slower commuter trains which will do the job for 125 SEK, but they’re less heavily promoted, and it took me a couple of days to work that out. The other decent option (and the one I took) is the Flygbussarna, the airport coach that costs a slightly more acceptable 99 SEK: particularly useful in my case, as one of its intermediate stops was just a couple of minutes walk away from my hotel.

I was working in the Solna region, a couple of miles due north of Stockholm city itself, and the closest cheap hotel to there turned out to be the Ibis Styles. It’s a hotel in a curious state of transition, as it was owned by the All Seasons chain until the recent acquisition by Ibis, and both names are still on the front. The idea behind Ibis Styles hotels are that they’re that little bit more design-oriented than your typical Ibis, and this one certainly fit that description – the main thing that took a little getting used to was that the window in my room pointed inwards, and looked out into the atrium rather than outside. But it was a fine room, and all the usual facilities worked, including the wi-fi for regular calls home.

The majority of my travelling during my time in Stockholm was done using SL’s Pendeltåg commuter trains – my hotel was a few minutes walk away from Ulriksdal station, while my workplace was a similar distance from Solna station, just one stop away. Those walks were the point where I really came to appreciate the Magic Spikers I brought over to attach to my shoes: the paths to both stations were covered in several inches of frozen snow, and I’ve got no idea how I would have walked anywhere without them. As for the trains, they’re pretty reliable, apart from one evening when I discovered the Swedish word for ‘points failure’. (The BBG refuses to believe me, but it basically sounds like 'points failure' if you said it with a mouthful of cotton wool. Bing Translator suggests it’s something like ‘poäng fel’.)

The transport pricing system in Stockholm is zone-based – you buy a ticket for the zones you want to travel in, and that ticket is valid for 75 minutes no matter how many changes you make between trains, buses or the metro. Stockholm Metro comes into its own if you make regular evening trips into the centre of town, as I did when I was trying to find a cinema that would show me a Swedish film. Keep an eye on that 75 minute time limit, and don’t underestimate the change times between lines – especially at Stockholm Central station, where the distances between the trains and the metro are enormous.

Central Stockholm’s a pretty city to wander around in, but be warned that the snow clearing can be fairly erratic from one street to the next: I found it safest to keep my Magic Spikers on the whole time, just to be on the safe side. Most of my wanderings, as documented in the Mostly Film piece, involved checking out the various cinemas in the SF chain, many of which are clustered together within a few minutes of Hötorget station. The two I ended up in were the gigantic multiplex at Filmstaden Sergel, and the more intimate arthouse at Sture. I also did a little bit of investigation in the Kungsholmen area, which I can guess I can now reveal was preliminary research for another forthcoming article.

That kind of leads us into food and drink, but to be honest I haven’t too much to report on that front. A combination of snowboundness, cold and a dawning realisation of how damn expensive it is to eat in Stockholm meant that most evenings, I had dinner at the Ibis, which laid on a perfectly adequate but rather bland international menu. (Their continental breakfast was also fine, but they did sometimes take a little too long to restock items on the buffet when they ran out.) My one outside meal of the week was at Vurma on Birger Jarlsgatan, just across the road from the Sture cinema. It’s a delightfully cosy little place (part of a small chain), where I had a terrific dinner of ankbröst (that’s duck breast to you) served with lentils that appeared to have been marinaded in booze for several years. This counted as my end-of-trip blowout, as that one dish plus a glass of basic red cost me nearly thirty quid. (Now do you see why I stayed in the hotel restaurant?)

It seems ironic that in London’s worst week of snow this year, I ended up running away from it to a city that was several degrees colder and with even more snow: but I had a very nice time indeed in Stockholm. Familiarise yourself with the transport lines, make sure you’ve got footwear that can cope with the current state of the pavements, and be prepared to spend shedloads on eating and drinking, and you can do the same too. Now, all I need to do is to start saving up for the return trip that The BBG will be demanding later this year…