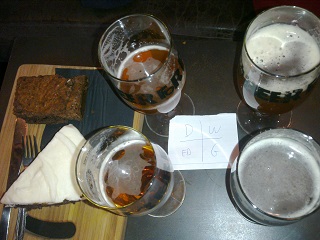 This is going to be a long one. Not because there’s a particular problem with reviewing the BrewDog bar in Newcastle – far from it. But there are several other things we need to take into consideration alongside a simple analysis of a bar. For one thing, The Belated Birthday Girl and I have reported on previous adventures in Newcastle, back in Christmas 2009, and we were curious to see what the city looked like when it wasn’t completely covered in white slippery stuff. In fact, given the weather a couple weeks ago, we weren’t entirely sure that we wouldn’t be snowed in again. In the end, there was an occasional microflurry, but otherwise the weather was fine.

Regular readers may have worked out what else needs to be discussed at some point: because our visit to Newcastle took place over the Easter weekend. We have an Easter Sunday tradition that needs to be upheld, as it was most recently in Whitstable in 2012. Could we keep up the run this year? Well, yes, obviously, but we won’t get into that just yet - we'll save that for a separate post, and just concentrate on the beer for now.

BrewDog Newcastle is conveniently placed near the bottom of the hill on Dean Street. (Nobody wants to do climbing when they need beer, surely?) By now, we’ve been in a few of these places, and the design strategy is pretty much as we’ve come to expect. We’re looking for the USPs that separate one bar from the next, or how they handle one of the special events that make life in a BrewDog that bit more interesting.

By happy coincidence, on the Saturday of the Easter weekend, there was just such an event taking place across all the bars in the UK – a launch of a set of four beers under the banner title IPA Is Dead. The idea was this: brew four separate India Pale Ales, each to the same recipe, the only difference being the type of hops used in each one. Serve all four simultaneously, and let the punters compare and contrast. (If you want to play along at home, they're currently on limited sale at BrewDog’s online shop, but hurry.)

The four beers were available on the day as a flight of 1/3 pint glasses, but we decided to up the ante a little by creating our own ½ pint flight instead. The results were interesting, to say the least. Of the four, El Dorado (made with the American hop variety of the same name) was the most consistent, staying flavourful and interesting no matter what we did with it. Dana (from Slovenian hops) was a little dull by comparison, but opened up enormously as soon as you combined it with food (more on that imminently). The New Zealand hop Waimea was the closest to the sort of experimentation you expect from BrewDog, with a surprisingly bitter aftertaste (in a good way, mind). Against these three, the English hop Goldings was a large glassful of meh, despite apparently being the favourite of BrewDog boss James Watt.

Still, it was interesting enough as experiments go, and it provided the hook for our second visit of two – the first one was on Good Friday evening, where we drank an IPA Is Dead pilot brew called Amarillo that was actually more consistently gluggable than the four beers in the finished range. Those two visits gave us an interesting insight into what sets Newcastle apart from the other BrewDog bars. Obviously, the city isn’t short of places to drink, and even less short of people who want to frequent them. Our Friday night suggested that most punters there were using the bar as just one point in a pub crawl, having a couple of beers and then moving on – there were only a couple of people like us who appeared to be there for the night.

The crawlers' loss is everyone else's gain, as this place has a lot to offer. There's a defiantly Geordie spin on the corporate branding, with lots of words like ‘lush’ used on the chalkboards, and a copy of a Viz annual on the bookshelves. (In the land of the Profanisaurus, they know full well that having a sign over the bar reading LOOK AT MY GROWLER has an entirely different meaning here.) There's an eclectic music policy: on the night we were there, it somehow swang from the Sex Pistols’ Bodies to Glenn Miller’s In The Mood in the space of three songs. And there's a fine collection of bottled beers alongside the usual draft range, the highlight for us being Bitch Please Islay Cask, which has been matured for a year and a half in whisky barrels to give you a beer the strength of a wine that tastes like a Scotch.

But Newcastle has one more weapon up its sleeve: its food. Not the pizzas you get at the London branches, or the hot dogs we saw advertised at Bristol – instead, we have Scotch eggs and cake. The Scotch eggs come in four versions: we tried the veggie and black pudding variants, and both worked just fine, particularly alongside our IPA Is Dead flight. But the cakes were magnificent. They're made by Pet Lamb Patisserie using BrewDog beer as a key ingredient, which seems like the craziest idea on the planet but works a treat. The two portions we had – a malt and orange blossom sponge made with 5am Saint, and a chocolate brownie enhanced with Riptide stout – were magnificent, and so huge (see picture above for scale) we had to go back to the hotel for a bit of a liedown afterwards. I know I keep saying that the local variations between the bars make them interesting, but if they could find a way to get these cakes out to the rest of the country, I wouldn’t object at all.

Short version – Newcastle’s BrewDog bar is, as they say, lush. You should go, and don't forget to eat while you're there. But what else can you do in the city when you’re not drinking beer or eating cakes? Find out in Easter Parade 2013...