Deadhead Sticker On A Cadillac: Pick Of The Year 1985 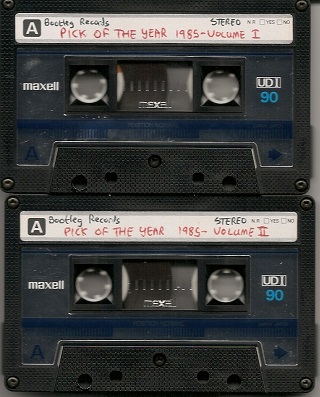 It says 1985 on the tapes, but if you look at the small print on the handwritten sleeve, it claims that this compilation was actually committed to ferric oxide between May 17th and May 22nd 1986. What took me so long? I'd imagine it was down to me doing all the things you'd expect a 22-year-old male to be doing once he'd been let loose in the capital.

1985 was my first full year of living in London, and a rather eventful one at that. I achieved my first promotion at work, although that was a standard thing after six months for a graduate entrant, unless you'd actually murdered someone on the job. I received my first ever eviction notice, which drove me out of a flatshare in grim tubeless south London to something that turned out to be a much better (and longer-lasting) arrangement. I continued to see a lot of movies, but I also started investigating London's live music scene, and that was probably the biggest development in my artistic life that year. By the end of 1985, I wasn't just an ardent gig goer, I was also a criminal, sneaking a series of ever-smaller cassette recorders into concerts and building a personal library of fuzzy-sounding live tapes that I still have to this day.

If home taping was killing music, I was murdering it in a couple of different ways, and this 39-song compilation counts as one more nail in its coffin. Some of the selections are baffling to me 28 years later - they're either songs I never realised I liked in the first place, or dull tracks off otherwise exciting albums. See if you can work out what the hell I was thinking, because I'm not sure I can.

Continue reading "Deadhead Sticker On A Cadillac: Pick Of The Year 1985" » 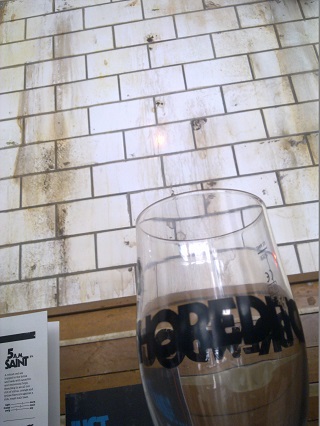 Word association tests don't lie: if you say 'Shoreditch' to me, my immediate response is going to be 'Twat'. Even though it's a district of London that's not all that far away from where I live, Shoreditch still feels like a Nathan Barley theme park whenever I visit. You find yourself playing Hipster Artefact Bingo as you walk the streets. Non-working class guy wearing flat cap? Check. Apparently heterosexual male in red trousers? Check. Grown man going down the street on a fucking skateboard? Check.

Last year, a bar opened in Shoreditch which had the following sign in its window: "WARNING! All hipsters MUST be accompanied by a responsible adult." I think you know where we're going with this. 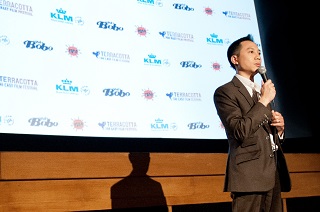 In 2009, the year of the first Terracotta Far East Film Festival, I wrote a shortish review of four of the films shown there. In 2010 I didn't get to the Festival at all, because The Belated Birthday Girl and I were swanning around Japan at the time. In 2011, I bought my first ever Terracotta Festival Pass, saw eleven films in three days while under the influence of crippling jetlag, and reviewed them all for Mostly Film in an article I whimsically chose to entitle Terracottadammerung. In 2012, that got cranked up to sixteen films in four days, but at least without the jetlag.

The Terracotta Far East Film Festival 2013 will take place on June 6th-15th at the Prince Charles and ICA cinemas in London, and yes, I'll be there again. This time round, however, my accompanying article for Mostly Film is a pre-festival preview, which shares a title with the Festival's Twitter hashtag for this year: #TFEFF13. I haven't seen many of the films as yet, but thanks to a combination of press notes and YouTube clips, I've had a go at recommending the ones to catch at the fest next month. If all those words I've written feel too much like hard work, don't worry: the accompanying Red Button Content for the piece is a playlist of the trailers for all 27 films. I set it up to help me with the research for the article, and now I've finished with it you may as well have it. You're welcome. 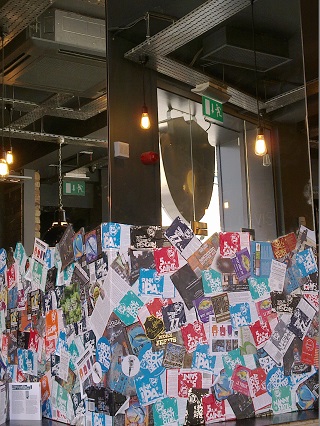 From Telly Savalas to Bono, many have sung the praises of Birmingham over the years. Me? Not so much. As recently as a couple of months ago, I certainly wouldn't have considered it as a destination for a Bank Holiday daytrip.

But then BrewDog opened one of their bars on John Bright Street and, well, you can guess the rest.

No Chicago Urban Blues: Pick Of The Year 1984 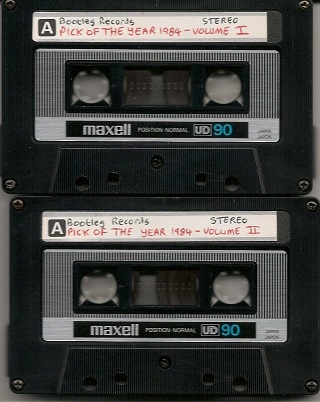 If part of the function of these compilation tapes is to provide year-by-year documentation of the state of my subconscious, then 1984 is probably the big one for you amateur psychologists to focus on. At the start of the year I was living with my family in Manchester, and in the final stages of studying for a degree. By the end of the year, I'd got the degree, had started my first proper job, and was living in London in my first ever shared flat. (In fact, by the time I got around to committing these songs to tape - March 28th 1985 - I was actually living in my second ever shared flat, having discovered the hard way how absentee landlords work.)

So I'm sure it's just a coincidence that while all this was happening to me, some of the finest music ever composed in the history of the world was being released. At least, that's how it seemed to me at the time. Shall we see if it still holds up?

Continue reading "No Chicago Urban Blues: Pick Of The Year 1984" »

Simian Substitute Site For May 2013: How To Prevent Or Survive A Monkey Attack 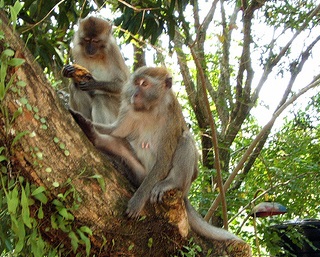 Art: You've got until the end of May to catch the Lichtenstein: A Retrospective exhibition at Tate Modern in London. Mind you, some people would rather you didn't. For me, it was interesting to see that the large-scale swipes from comic books weren't the only things Lichtenstein did: this exhibition also includes many of his lesser-known works, culminating in a room of his lovely Chinese landscapes. But the most famous pieces have reawakened an old debate amongst the comics community about how the work of the original artists has been reappropriated without any sort of acknowledgement. This time round, there's going to be an attempt at redressing the balance: a rival exhibition called Image Duplicator, to be held at the gallery in Orbital Comics from May 16th, in which comics artists will rework Lichtenstein's images while giving credit to the original illustrators rather than him. Judging from the images released so far, it's definitely going to be worth a look, although I suspect the Tate exhibition will have better beer.

Comedy: It's very silly, I admit. Adam Buxton has been running his Bug video shows at BFI Southbank for six years now, and I haven't attended a single one of them. But when he does one in Leicester on the week that I happen to be working there, well of course I'm going to go along. The Phoenix arts centre was nicely rammed for a show that roughly followed the format of its telly equivalent, but with a few more sections where two videos were played back to back to give Doctor Buckles time for a wee sit down. I could just give you a playlist of the ten videos shown - if that's all you want, we could do that now - but Bug is so much more than that. It's also about the rambly anecdotes from Buxton's personal life, the daft voices he uses to read out YouTube comments, and the opportunity to see something as mental as Biting Elbows' Bad Motherfucker with an audience on a big screen at dangerous volume. I'll get to a London show one of these days! Eventually.

Music: After a few years of near misses, last weekend The Belated Birthday Girl and I finally caught a live show by The Men That Will Not Be Blamed For Nothing. First brought to our attention by their guitarist Andrew O'Neill in his day job as a stand-up comic, The Men are a steampunk band with a collection of noisy songs about the concerns and issues arising from the Industrial Revolution. They're also funny as hell. A quick test for you - do you like this? Well, imagine what that would be like with an audience full of women in bustles and men in stovepipe hats. The songs from their two albums all sounded great, but the newer songs sounded even better, which bodes well for the band's future (Jesus Was A Cockney for Christmas number one, please). Fine support on the night came from scary thrashers Reprisal and R&B socialists Thee Faction, the latter providing a definitive answer to the question "what would Dexy's Midnight Runners sound like if they were fronted by Jeremy Hardy?"

Continue reading "Simian Substitute Site For May 2013: How To Prevent Or Survive A Monkey Attack" »