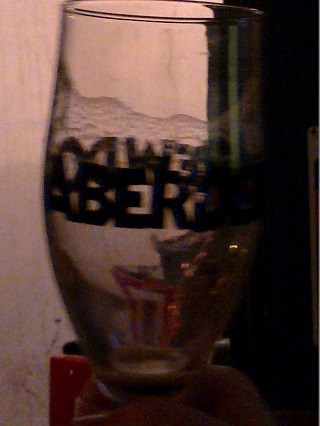 Take a look at that glass over on the left. As you can see, it's one of the customised glasses for use in a specific BrewDog bar. You've already seen the variants for Bristol and Shoreditch in the relevant articles: well, this is the one for BrewDog Aberdeen, the first of the bars to open, located in the home town of the brewery itself.

Most of the time, we've found an excuse to travel to the various cities where BrewDog have set up bars, and Aberdeen had the best reason of all: the Annual General Meeting for the brewery's shareholders. The June 2013 AGM was notable for taking place two days after the announcement of Equity For Punks III, the third time that shares in the company had been offered to its fanbase. (The Belated Birthday Girl and I came on board during EFP II, just before Christmas 2011.)

So our first visit to the bar took place on a Friday night, the day before the AGM. (Although in an amusing twist, I'd been sent to work in Aberdeen just one week earlier, so for me it was a second visit.) My first impression was that although it's a fine bar, with the usual collection of terrific beers on offer, you can see that the subsequently opened branches have attempted to improve on the original in a variety of ways. It's located in the middle of a road, whereas most of the others have been on attention-grabbing corner locations, which seems to be a corporate standard. Also, it's much smaller than the other bars, with its limited selection of bar snacks banished to what looks like a former outside lav off the main building.

But as I said, these are quibbles that BrewDog have noted and fixed in subsequent bars. And the same could be said of their AGM, held at the AECC arena the next day. Last year's AGM was the first one we attended, and the first one held at Aberdeen's own Enormodome: and even the most rabid supporter of the brewery would have to admit that the 2012 event had its flaws. For The BBG, the obvious one was the catering, which was left to the normal burger vans that serve food at the AECC on gig nights: the only vegetarian option available was chips, and those ran out halfway through the evening. For me, it was the logistical folly of serving beer to a few thousand people for the best part of a day without giving them anywhere to sit.

Both of those problems were fixed splendidly this year. The venue configuration was completely changed, for one thing. Last year, it was just a huge stage and a dancefloor. This year, the room was split down the middle: one half dedicated to a stage and rows of removable seats, the other half containing the bars and a decent sized collection of tables. Once the official business of the AGM was out of the way, the seats from the stage area could be removed, and you had a choice - have a bop to the various bands that were on the stage for the evening session, or relax at a table with a dangerously strong beer or two. Or, for that matter, with something from the excellent selection of street food on sale throughout the day, closer to the sort of fare that some of the BrewDog bars themselves offer.

With the increased size of the area allocated to the stage, the Annual General Meeting itself could be got over with in a single sitting, albeit one well over two hours long. (If you want to recreate it in the privacy of your own home, the PowerPoints are available here.) The first half was largely James Watt hyping up the company's achievements over the last twelve months, and plans for the next twelve: the second half was Martin Dickie getting seriously beer geeky with a discussion of the new brewery, and audibly losing the attention of the audience along the way, sadly. In between, there were tastings of four new beers, although to be fair they weren't as exclusive as was made out - at least three of them were on sale at BrewDog Aberdeen the night before.

Fake Lager has actually been around for a while, as it was launched on April 1st as a jokey attempt to grab the lager market in BrewDog bars - the aim was to come up with something along the lines of a Czech Pilsner, but sadly it's a lot less interesting than any of the real Czech Pilsners we've encountered on our travels. #Mashtag was brewed to a recipe decided by BrewDog's internet fans via tweets and blog postings over the space of a week, while Electric India was constructed during a shareholders' brewing day: both of them were generally unremarkable, proving once and for all that Democracy Doesn't Work. (To be fair to Electric India, it's an interesting mix of refreshing flavours, it just doesn't last very long on the palate: while subsequent experimentation with #Mashtag has showed that the closer it is to room temperature, the better it tastes.) Watt Dickie, however, is a different kettle of fish entirely. Another of BrewDog's experiments in abusing beer with coldness until it hits stratospheric ABV levels, it's the closest thing to a proper spirit they've produced to date, and tastes astonishing. I think The BBG and I have found what we'll be finishing off bar sessions with for the forseeable future.

So with all the serious stuff out of the way, we could get down to six hours or so of fun. The stage was taken over by half a dozen bands, with the tongue-in-cheek fluff of MFC Chicken and Kitty Daisy & Lewis going down much better with the crowd than the dull rock bollocks of United Fruit and The Xcerts. The big screens at the side of the stage interwove shots of the bands with audience tweets, leading to a long-running gag about some guy being caught wanking in the toilets. The AGM shop was infinitely better organised than last year's, thanks to the simple method of not attempting to package everyone's beers for delivery at the time of ordering: we placed our order for a crateful of fun in around ten minutes, and had it on our doorstep within ten days.

Then there were the AGM bars themselves, selling a wide variety of BrewDog favourites and guest beers, and with a secret weapon up their sleeve: The Hopinator. BrewDog's beers are hoppy enough at the best of times - but imagine what they'd be like if you passed them through a giant container full of hops on their final journey from the keg to the glass. Over the course of the evening, as they switched The Hopinator from one barrel to the next, we tried hopped-up versions of several classics: IPA Is Dead Amarillo, Alice Porter and Hello My Name Is Ingrid. The results were always fascinating, whether you ended up with an already hoppy beer made even hoppier, or a fruity beer with the hops put back in again. As it got closer to the 11pm closing time, we were feverishly planning what our big finish would be.

And then they closed the bar half an hour early without warning.

It's a shame, because everything was going so well up till then. This isn't just a complaint about not being able to get beer - it's a complaint about how the bar operated with pre-paid tokens, which meant that after 10.30pm people were stuck with leftover tokens they'd already paid for and had no way of redeeming. Thanks solely to the power of persistence and whining, we managed to badger one of the bar staff into grudgingly giving us 2/3 of a pint of Fake Lager for our tokens. Hooray! We got to finish off the day with a suboptimal quantity of BrewDog's least interesting beer. The staff kept insisting the decision to close was out of their hands, and it was AECC's call: but doing it without warning was unforgivable. They had boards at the bars, they had a PA system, they had big screens that were being used to advertise changes in beers - and yet they didn't feel it necessary to use any of them to warn people that their beer tokens would become worthless half an hour early. The half-hearted apology given to anyone complaining at the bar - "you can come back and use them again next year!" - just seemed insulting rather than helpful. Last impressions can be just as damning as first ones, you know.

Getting back to the Aberdeen bar. On our first BrewDogging visit of this tour, in Bristol, we discovered something we hadn't realised before - the bars will sell you their beer glasses as a souvenir, the ones with the name of that particular bar on the side. So at Bristol, Camden, Newcastle, Birmingham and Shoreditch we've paid a couple of quid to start building up a physical monument to this year-long bit of silliness. When we asked to do the same at Aberdeen on the Friday night, they told us they were too busy to spare any of their glasses, and to come back on Sunday. When we came back on Sunday and asked again, they told us they were still too busy, and "you can always come back some other time!", a response that sounded a little too similar to the one they were using the night before at AECC.

I don't want to be that guy who takes some sort of queasy moral high ground by suggesting that we could have just stolen one of their glasses, but chose not to. And I don't want to be that guy who lets a small example of jobsworthiness ruin his whole experience of BrewDog Aberdeen, especially after the highpoints of the AGM (not to mention a tour of the new brewery the day after, documented in my Picasa photo album of the weekend). But, well, that thing I said about last impressions? That. Sorry.