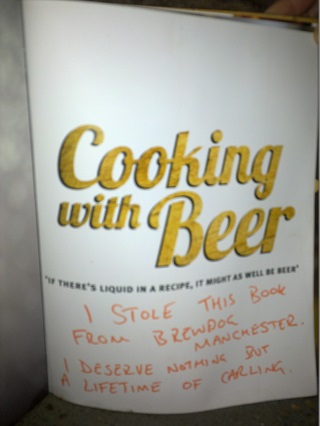 This could get hellishly confusing, but hopefully it won't be. Just keep these two things in mind.

Thing number 1: Last weekend, The Belated Birthday Girl and I went to Manchester, mainly to attend a series of events as part of the Manchester International Festival. I've reviewed the ones we saw - and a couple that we didn't - on Mostly Film this week.

Thing number 2: Since the beginning of this year, The BBG and I have been finding excuses to visit all twelve bars in the BrewDog chain. Manchester has one.

So, bringing the two together: in order to promote my Mostly Film review of the Festival (which was originally entitled MIFfed because I couldn't think of anything better, so thanks to my editor for the improved version Mostly MIFfed), here's some Red Button content that will focus on the stuff we did in between the festival shows. Well, mostly the eating and drinking, if I'm honest with you. And most of that was done in one particular location.

We had it all carefully planned from the start. Our choice of hotel, the Premier Inn Manchester Central, was admittedly well positioned for the majority of Festival events we'd booked for, and gave us a nice £29 pound rate for one night of our stay, but it was also just round the corner from BrewDog Manchester. We spent three days in town in total, and the last thing we did on each day was visit the bar.

As regular readers will know, I've still got family up in Manchester, and when we went to visit them last Christmas we popped into the bar for a crafty swifty beforehand. On a December Saturday lunchtime, the place seemed curiously quiet. Happily, I can report that on Friday and Saturday nights, it's buzzing to the degree you'd expect a bar of this size. It's a little quieter on Sunday afternoons, with most of the crowd taking advantage of the outside terrace area. (I think Manchester may have been the first BrewDog bar with outdoor seating, though Bristol has also installed some since our last visit.)

As far as the beers went, we stuck to our usual favourites from BrewDog's core range, with the occasional foray into guest brews from Ska Brewing and the like. But we were also keen to try one of the things that separates BrewDog Manchester from its other relatives - a just-introduced BBQ menu. We're happy to report that it's a roaring success, the only problem being that the portions are so gigantic that it's hard to finish everything on the plate. My pulled pork roll was saucier and sloppier than the equivalent version on sale at Birmingham, and was all the better for it, particularly with a pile of sweet potato fries on the side. The BBG liked her halloumi burger, but she loved the mac and cheese portion that came with it, and was sorry to have to leave some of it inside the small bucket it was served in.

It's always interesting to see how the clientele vary from one BrewDog bar to the next, spotting the differences between the regulars and the passing trade. The Manchester bar's Peter Street location is an interesting choice, as it's a once-thriving bar area that's very much gone to seed over the past decade. However, things should change soon - two of the shuttered venues on the street (one of them being the former Albert Hall where we saw The Masque Of Anarchy) are planning to reopen within the next twelve months. In the meantime, BrewDog is probably the most visible boozer on Peter Street, and we saw this scenario take place a couple of times. A group of young men enters the bar, and stares at the list of beers for a couple of minutes. The highly trained staff spring into action, and explain the differences between them. One of the young men thinks for a couple of seconds, and then utters a line that has haunted The BBG ever since.

"Do you have any standard beer?"

The staff do their best, offering pints of Dead Pony Club or Punk IPA accordingly, but they know they're already losing the battle. Within five minutes, the young men have gone again, leaving pints of beer with approximately half an inch taken off the top. So, hey, poor people! Interested in all this talk of the Craft Beer Revolution, but don't have the money to get involved? Then just follow a stag party into BrewDog Manchester, wait five or ten minutes, and you'll have free access to the tastiest slops available in the whole of the city.

You get the feeling that the staff feel happier with customers that know a little more of what to expect, and the lass behind the bar positively perked up when we asked to try a bottle of Mikkeller Beer Geek Vanilla Shake from the fridge, a beer that has all the positive qualities of a coffee-flavoured milkshake and gets you pissed too. Based on our observations, I suspect that the disappointed punters can be treated as collateral damage: there are plenty of long-term customers digging in and enjoying the many delights of BrewDog Manchester, all the way down to the comics-decorated toilets and the beer-related library with special flyleaf inscriptions as shown above.

All good stuff, but we couldn't spend the whole weekend in there. So I'll finish off here with a few other places we can recommend to you:

Teacup - we last visited Mr Scruff's teahouse during our visit for MIF 2011. They're still offering fine eggy breakfast dishes and a huge range of teas, but the tea service now lacks a detail that impressed us two years ago - they used to give you a second teapot, for decanting your first one into once it had brewed for the precise number of minutes you required, and now they don't do that any more. Shame.

City Cafe - one of the city's better known hotel restaurants, attached to the DoubleTree. In the short gap between our Friday evening arrival and the Massive Attack/Adam Curtis disappointment, the City Cafe's pre-7pm early dining deal hit the spot perfectly, offering two courses and a glass of wine for £14.50.

Room - this probably counts as our showcase meal of the weekend, a fancy room offering classic food that's been deconstructed up the wazoo. My choice was an opener of watercress soup served with small blue cheese Breville toasties, followed by a comparatively standard duck a l'orange. The BBG had some sort of pulled-apart prawn cocktail, followed by halloumi cooked a la chip shop. We finished off by sharing a strawberry and cream pud where the strawberries were liquid and the cream was solid. For all the fannying about with the physical structure of the food, though, it still tasted nice, and that's the important thing.

Festival Pavilion - it's good to see that after a few goes, the Festival now has a physical centre to it, with Albert Square turned into a thriving hub of venues and places to relax. The Pavilion counts as both - it's where we saw Dave Haslam rock the decks on Saturday night, but it also serves food and drink throughout the day, including the specially brewed Thwaites Festival Ale. It's a perfectly acceptable summer brew, but after several hours at a BrewDog bar, it tastes a bit... well, standard...

Well, this is embarrassing. The Belated Birthday Girl read over this piece some twelve hours after I posted it here, and asked "so where are the cocktails?"

When I finished off the post with a list of other venues we'd visited, I forgot to mention Cloud 23. Oops. Halfway up the huge tower block that is the Hilton Deansgate, we've always assumed that Cloud 23's elevated bar with stunning views would be impossible to get into. That may be true in the evenings, sure, but on a Sunday lunchtime you can just walk straight in, order posh drinks and look out over Manchester as you drink them. (For the curious amongst you, the one on the left is a Dalton Is Atomic, the one on the right is a Here's To Baby. See the drinks menu on the website for full details.)