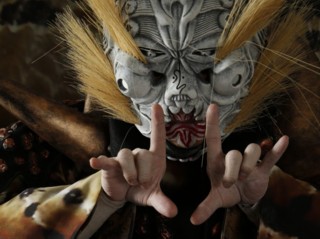 Our first show isn’t until three in the afternoon, and yet the morning gets consumed with admin – writing and uploading the page, shopping for supplies (how have we run out of milk already?), discovering interesting shops while looking for those supplies. It’s always the case that the festival expands to occupy the time you’ve allocated to it, and there’s never really time for you to do anything else. So, a quick suggestion – can someone who doesn’t really care about the copyright implications please put on a Fringe show that’s just a big screen projection of Sunday’s episode of Breaking Bad? I’m sure there are plenty of people in this town who’d appreciate it.

As it is, we barely have time for lunch at the King’s Pantry before nipping next door to the King’s Theatre, site of some of the best and worst International Festival productions I’ve seen over the years. Where does Metamorphosis fit into that spectrum? Somewhere in the middle, if I’m honest. It’s an intriguing idea – a Chinese opera version of Kafka’s novel, performed as a one-man show (with backing band) by acclaimed Taiwanese actor Wu Hsing-kuo. The programme notes focus heavily on his theatre work, but it turns out that I’ve seen him in numerous Hong Kong movies over the years, in productions as diverse as The Soong Sisters and Rock ‘n’ Roll Cop.

It’s the fusion between east and west that attracts your attention – a classic of modern Western literature told in a traditional Eastern style. The musical accompaniment is where the fusion is most apparent, cunningly combining elements of both cultures so that the two-elephants-shagging-in-a-tin-box sound we tend to associate with Chinese opera isn’t prevalent throughout the whole piece. The use of projection work across a simple set recalls Western directors such as Robert Lepage, but the colour schemes are very much Eastern influenced. And there’s no denying that Wu’s performance is an absolute tour de force, playing six very different aspects of Gregor in the six scenes of the play.

I just wish it all came together more as a whole – there’s a very dreamlike atmosphere throughout the whole piece, but despite the odd visual coup it’s quite easy to find your attention drifting now and again. The story of Gregor and his alienation fits surprisingly well into an Eastern artistic framework, but there’s lots of individual parts to admire rather than a whole to love. You're hoping for a moment of transcendence at the climax, and it doesn't come: the audience at this performance didn’t realise it was all over until Wu was halfway through his first bow. Metamorphosis isn’t a complete failure – it looks and sounds too beautiful to be that – but it doesn’t quite hang together as it should. 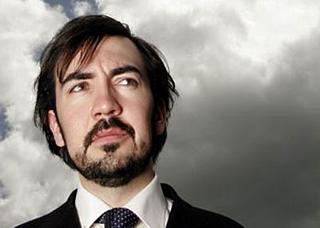 The more observant of you will have noted that we’re in Edinburgh a little earlier than usual this year: scheduling problems meant that we had to book our accommodation during the middle week of the Fringe rather than the final week. As a consequence, we’ve ended up being in town during the dead spot – the Monday in week two when many acts, especially comedians, think it would be a good time to take a day off. Despite that, there are a couple of comedians working on this day regardless, and we get to watch two of them back to back.

Stephen Carlin has been around for a while, but he first came to my attention properly earlier this year with a couple of appearances on Comedy Central’s show The Alternative Comedy Experience. Actually, the comic who really impressed me the most on that show was David Kay, but unfortunately it appears to have increased his profile to the extent that he only needs to perform on two days, both of which are after we’ve left town. Carlin isn’t quite at that level, but it’s good to see that the sixty-seater box he’s hiding in at the Pleasance is pretty much packed out today.

The theme of his show is gambling, though along the way he covers other addictions he’s dealt with during his life, like alcohol and sweets. (“I admit it, I snack between meals. But there's no other time when you can snack.”) Gambling addiction is a much safer proposition, he argues, as it’s the only form of addiction where one of the cures is to do more of it until you win. Carlin paces the show well, but a few of his gags play to undeserved silence (apart from one guy in the audience who laughs at everything). He has fun analysing where he's gone wrong in flight (“not an autism crowd, then” he says after one particularly awkward silence). For me, it feels more like he’s such an affable character, any deviation from that persona into edgier territory makes the audience feel awkward. Nevertheless, it’s an entertaining hour, climaxing with a rant about Nate Silver and how he’s realized Carlin’s dream of making a living out of gambling. Wonder if Carlin’s going to be attending any Book Festival events tomorrow?

At the other end of the comedy scale (although Carlin really isn’t at one end of it), there’s Michael Fabbri. I first encountered him compering a late show at the Stand in 2010, and getting so many laughs that nominal headliner Brendon Burns got jealous. We subsequently went along to Fabbri’s solo show, only to find ourselves in the awkward situation of being in an eight-person audience. Three years after that, Fabbri’s now performing at the Free Fringe, on a night when many other comedians are taking a holiday… and this time, we’re part of a nine-person audience. His excuse is that although he’s working today, the guy who normally hands out his fliers isn’t, and now he knows how important fliering is to a free show.

If it’s any consolation to Fabbri, he’s much more confident in front of 9 people in 2013 than he was in front of 8 in 2010. His show’s a series of loosely connected routines, discussing his travels round the world for work, and his life back home in Brighton (and previously in South London, where his neighbourhood picked up a City In Bloom award thanks to all the floral tributes near murder scenes). He ends with what he announces up front are a couple of extended bits – the story of a London to Brighton road trip he made with some American tourists, and his experiences at the Olympics opening ceremony. They’re nicely assembled routines, well performed, and the additional length shows that his skills are just as much about storytelling as they are about decent gags. He’s well worth seeing, and definitely deserves to be in fuller rooms. 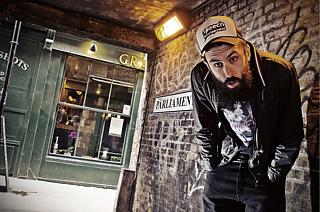 Filling a room doesn’t appear to be a problem for Scroobius Pip - he may not have been on telly, but he has had a couple of hit records with his musical collaborator Dan le Sac. For the last three years, Pip’s been going solo as a performance poet – a phase that’s presumably coming to an end, as the first new material from Dan and Scroob hit the internet only last weekend. But in the meantime, he’s got a series of shows on the Fringe under their new Spoken Word category.

I’ve been coming to Edinburgh on and off for the last quarter of a century, and remembers the day when the Fringe programme had no categories at all (hence Malcolm Hardee’s shameless insistence that all his show titles started with the word “Aaaaaaaaaaaaaaargh”). So it’s interesting when new categories start appearing every few years, as new artistic forms become fashionable. For years, nobody knew what to do with the poets: were they comedy, theatre or what? It’s funny that in the last few years, what the programme now classifies as Spoken Word has become a genre with all its own clichés and formats. The speedy wordplay, the verse/chorus structures, the use of multiple internal rhymes stolen from hiphop – everybody’s doing something similar.

What Pip brings to the genre is a fairly bleak perspective, albeit one which he keeps pointing out to us for comedy purposes. (“People tell me it’s brave to start off a show with the poem about suicide. And I say, ‘you think I’ve only got one?’”) If you’ve ever heard a le Sac vs Pip record, then you know the sort of subject matter and delivery he favours, and this is just an hour of him doing that without the slamming beats in the background. I always knew he had a rock-solid sense of how to structure a poem for best effect, but it turns out that he can structure a show with the same degree of confidence. The section where he reads some poems while sitting down is a welcome change of pace, and turns out to have an entertaining ending. It’s his first ever year on the Fringe, and he’s playing it like a natural – I hope he doesn’t lose this when he goes back to being a pop star again.

Pam – Dave liked Head Over Heels In Saudi Arabia, but Teresa and I were disappointed, despite meeting Maisah Sobaihi’s husband in the queue and seeing how proud and excited he was about her show. Not sure what she thought she was doing – not really satirical about Saudi society, more like gentle leg-pulling, lots of raucous squealing in Arabic and one-sided telephone conversations, very gossipy. A shame, because what struck me through all her over-acted impersonations of rich, indulged but socially hampered Saudi women was the real sense of unexpressed anger underneath.

Nick - Banksy: The Elephant In The Room. With a string of four and five star reviews, I was expecting more from this show. A fine performance from the actor didn't make up for a poorly written documentary drama. Some of the staging didnt help - drawing a graph of his time in LA with a spray can was a very clumsy device. The piece just plodded along at a very prosiaic level, never soaring to the levels or amusement or cleverness of Banksy street art, 3 stars.

Pam – Wil Hodgson arrived late at the venue, so his opening remarks were flustered and embarrassed. Monotone delivery, no eye contact, minimal charisma. Very male-geek humour, not much for females to laugh at. Not worth a long walk home!

Hi Folks, Don't know how you have the energy to see so many shows! Hope you are all having a great time and the weather holds out for you which it usually does