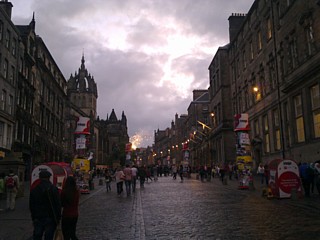 There must be better ways of marking your entry into another country than this. As ten of us speed towards Scotland in an East Coast train, the only real thing worth mentioning is a very noisy family group that's sharing the carriage with us. They're mainly annoying us by playing things incredibly loudly through an iPad without the benefit of headphones. At one point - possibly even as we cross the border - they choose to celebrate their destination by playing a Simple Minds song at full volume. Which has a certain logic to it, except Belfast Child?

Still, when that's the only thing I've got to complain about, that has to count as an uneventful journey, mainly taken up with lots of planning of events (and even attempts at booking, on the few occasions we can get phone reception). We get into Waverley station pretty much bang on time, and Nick performs his own celebration by setting his ringtone to bagpipes.  The taxi queue is similarly painless - I can remember the days when you could guarantee at least an hour's wait to get a cab, but this time we're off after a mere fifteen minutes, and end up getting to our accommodation a good half hour before we're supposed to check in.

After a few years of sleeping around with the University of Edinburgh, we're back to relying on the hospitality of Napier University's summer accommodation, and our welcome suggests that they haven't lost their touch. Even though we're far too early, they're happy to let us into our flats and get set up. By 4.30pm, we've stocked up with supplies from the local supermarket and we're having our first cup of tea. A few bits of admin follow - checking out the local area for possible meeting spots, a quick visit to the Traverse to grab any tickets they have left for this week (everything's selling fast, just look at all the red blobs), and a swift bite to eat at Illegal Jack's (which I first raved about here three years ago, not realising that eventually every second restaurant in London would be a blatany copy of it). And then it's off to George Square for our first show. 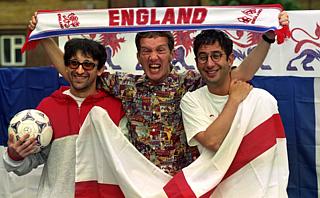 On the way to the Assembly George Square, we spot our first famous person - Miyuki from Mugenkyo Taiko Drummers, who's in transit between shows. Well, she's famous to those of us who've attended a couple of their weekend drumming workshops, but The Belated Birthday Girl and I had to explain who she was to Diane afterwards. Which makes for an unexpectedly apt preamble to David Baddiel's stand-up set, his first one for about a decade. Fame - Not The Musical features Baddiel's musings on celebrity from his specific perspective: that of someone who was really well known to the public a couple of decades ago, but not so much nowadays.

Last time I saw Baddiel in Edinburgh, it was when he was properly famous: 1992, at the height of the Newman and Baddiel double act, shamelessly recycling material that had been broadcast on telly only the night before. And look at what a total bitch I was about his current situation when I wrote about that gig in 2009! To be fair, that seems to have been a common reaction over the years, as people assume that anyone who's dropped out of the public eye must be doing really badly. Of course, there's a whole strand of comedy these days that takes great ironic pleasure from holding up has-been celebs for examination (looking at you, Ricky Gervais - although irritatingly, one of the biggest laughs of the night comes from a direct quote from him). What makes this show different is that this is self-examination, as performed by someone who's always made a point of being honest in his comedy, no matter how much damage it might cause him.

From the wrong angle, Fame could just look like a series of name-dropping anecdotes about My Adventures With The Stars - at one point, he manages to join together Andrew Lloyd-Webber, Ben Elton and Eamonn Holmes in the same story. But the name-dropping is there to provide a context for Baddiel's own rise and fall, and his astute analysis of how it's looked from the outside. He's particularly incisive on how his Jewishness has played a part in his public perception, despite the reluctance of the media to even mention the J-word, skirting round it with euphemisms like "self-made millionaire" and "North London resident".

It's not a perfect hour of stand-up - twenty years after The Mary Whitehouse Experience, Baddiel still can't resist throwing in the odd reference to the Holocaust or the abuse of his own children for a cheap gag. And for me, some of the best lines were spoilt because I'd already heard them at Richard Herring's Edinburgh Fringe Podcast a week earlier. But it's a cunningly structured, tightly delivered piece, which has plenty to say about our obsession with celebrity. Not that I was apparently listening to him, given my excitement at catching a glimpse of Morwenna Banks on the way out. 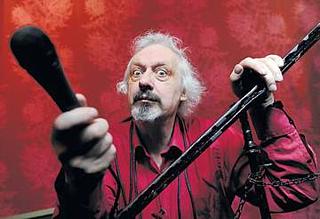 The Free Fringe is a bit like Islam, isn't it? Put down your fatwahs and bear with me for a second. Whenever Muslims mention the Prophet by name, they usually follow it up with Peace Be Upon Him, which in situations where you haven't got much text space gets abbreviated to PBUH. And when we talk about the two rival Free Fringe organisations, we identify the more established by one following up any reference to it with PBH. No, you're right, that's terrible.

In previous years, The BBG and I have done our bit for the Free Fringe by dedicating an entire day to it - but this year, we've decided to integrate our free shows into our normal Fringe days, giving the unticketed events a chance to prove their worth against the ticketed ones. And we've chosen to start with an old favourite, with the aforementioned PBH hosting Peter Buckley Hill And Some Comedians XVII.

I haven't seen many Fringe reviews this year, but one that tickled my fancy was on the comedy discussion board Cookd And Bombd, where someone discussing the PBH show expressed their concern at his "weird cult-like following". And you can see how it would look like that from a distance, as PBH wheels out pretty much the same old gags and songs about aardvarks and peas that he's been doing since 1996, and the regulars all lap it up. It's a fairly inclusive cult if it is one, happy to invite new members at any time. And it's not quite the barrage of  "same old shite" that PBH claims it is - there's a spectacular song I haven't heard before getting tons of comic mileage (and some appalling rhymes) out of the relationship between Adolf Hitler and Eva Braun. It's made all the more spectacular by him using it to introduce a German comic.

That German comic is Christian Schulte-Loh, who's apparently grabbed the URL www.germancomedian.com for himself  "because nobody else was using it," which may come as news to Henning Wehn. Like Wehn, he's mainly playing with the idea of racial stereotypes sounding all the more disturbing when delivered in a German accent, but he gets away with it thanks to huge self-confidence and being so tall that his head's hidden behind the main beam over the stage. In a surprisingly international bill, we also get the Swedish Erik Bomberg, who may lack Schulte-Loh's confidence but somehow manages to stretch out a small story about a magic trick in a bar for several minutes.

The second half has a fine pair of British comics for balance. Kate Smurthwaite delivers what are probably the best gags of the night, including a description of Nadine Dorries that's just far too good for a Saturday night drunk audience: "you meet her and she's as nice as pie, but after a while you realise she's also as irrational as pi." To wrap up, Howard Read does a terrific spot without his usual video projection gimmicks: it's just Read, his ukulele, and his hatred of his own children. Which makes for an entertaining contrast with earlier on today, as David Baddiel's show climaxed with emotional footage of his daughter performing at a school show, and never at any point included a song about how he'd like to get rid of her for a quieter life.

Four comics, one on-the-edge compere, and the chance to be part of an audience attempting to sing the choral section of Bohemian Rhapsody in different keys - that's worth a tenner of anyone's money, and that's what went in the bucket afterwards. And that was basically it for our first day, apart from the two separate nightcaps we accidentally had on the way back to our flat.