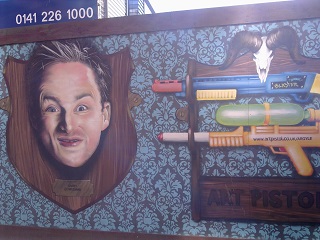 “How can anything else in the festival follow that?” I said yesterday, after watching a late-night video of a wrestler being hit in the face with a dwarf. The short answer is: it doesn’t have to.

Our final night’s sleep at this year’s Edinburgh – notable for our second fire evacuation of the week, caused when someone in the same flat that caused the first one tries using a hairdryer under the smoke alarm at two in the morning – is, as usual, followed by a panicky and more permanent evacuation by 10am, as we’re chucked out of our flats to make room for the new term’s incoming students. This would normally be the point where we try to squeeze in a few extra shows before going to Waverley station and getting the train back to London. For the vast majority of Spank's Pals, that's exactly what happens.

The BBG and I, however, have other plans. Instead, following a much-needed breakfast at The Red Squirrel, we go straight to Waverley and get on a train to Glasgow. Anyone who’s followed our BrewDogging exploits this year will have worked out that we had to go there eventually: given that Edinburgh’s less than an hour away from Glasgow by train, it seemed like the obvious time to fit that bar into our plans.

So if you’re here purely for tales of the Edinburgh Festival, that’s basically it for this year, sorry. We should have some Postscript reviews from Spank’s Pals in a week or two, so you can come back for those if you like. But if you want to hear about our day trip to Glasgow, here are the two things we did there. (Three, if you count a quick detour via the Faces Of Glasgow mural pictured above.) BrewDog Glasgow is reputed to have the best view of any of the brewery’s bars: look out the window, and you’ll see the magnificent Kelvingrove Art Gallery & Museum over the road. It’s a fine building, with huge amounts of stuff to look at inside. For the purposes of our flying visit, we choose to ignore everything else – even the free organ recital with a programme covering everything from The Arrival Of The Queen Of Sheba to The Theme From Wallace And Gromit – and head straight for the exhibition More Than A Game, entering its final weekend.

Scotland’s relationship with football has been a long and passionate affair, despite what may have happened last Wednesday. (In a great example of the bubble that Festival audiences live in while they’re up here, I wasn’t even aware of the score until I looked it up this morning.) More Than A Game is an exhibition that looks at that relationship, with the aid of huge amounts of memorabilia and some excellently chosen newsreel clips.

There’s plenty for all ages to enjoy. The kids will enjoy the dressing up games, the You Are The Ref quizzes and the jigsaw puzzle: The BBG and I are quite pleased at the way we nail the latter in just a couple of minutes. Meanwhile, the grownups can marvel at what Scotland’s influence on world football has been. Acknowledged as the nation that effectively invented the short-passing game, that impact is best illustrated by an interactive display that introduces you to the Scots responsible for introducing football to countless nations. Along the way, there are fascinating insights on how the game has changed over the years – the images of early 20th century games with audiences well into six figures are astonishing. It’s a terrific way to spend an hour or so, but as it closes on August 18th it'll have closed by the time you read this. 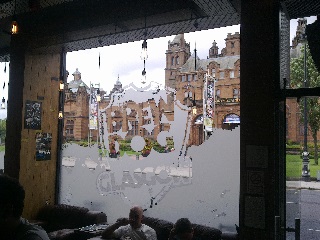 If you can’t see More Than A Game, at least you can console yourself with a drink at BrewDog Glasgow over the road afterwards. Let the record show that I had a sweet 2/3 of their old favourite Alice Porter, while The BBG went for a super-hoppy saison from Danish brewery To Øl with the delightful name Fuck Art This Is Architecture.

It’s our ninth bar of the twelve: how does it compare against the others? As usual, the staff are incredibly well trained and happy to explain the different beers to you. Interestingly, a feature we’ve seen in every BrewDog bar up until now – drawings of all the staff behind the bar so you know who’s who – doesn’t appear in Glasgow. Foodwise, they’re providing pizzas and burgers to the usual high standard. The burgers appear to be even more architectural than The BBG’s beer, huge towering things that require the insertion of a knife in the middle to hold them together: we order one of their mushroom veggie jobs for lunch to share between the two of us, and it's enough to carry us through to teatime.

There’s one other feature that’s worth noting, and that’s the very visible presence of an off-sales area. Yesterday, when The BBG and I went to see Devon Sproule, it was a BYO affair. As we wanted to bring along cans of beer for convenience, we went along to BrewDog Edinburgh, leaned over the bar, pointed at their fridge and demanded descriptions of the canned beers they had available. Unfortunately, the selection on the day was a little limited, with no cans of BrewDog’s own beers available at all: we ended up with a couple of cans of Oskar Blues’ 8.7% red ale G’Knight, whose stickiness and tasteable alcohol content made me realise we were basically just necking the middle-class equivalent of Tennent’s Super. Anyway: BrewDog Glasgow has a couple of highly visible shelves at the end of the bar, so you can see all the different brews available to take away. No other BrewDog bar is doing this: maybe they should.

We drink up, get the subway back to Glasgow Central, get the train back to London, and now we're home. I'm not quite up to giving you an overall summary of the week just yet: hang on for a week or two until the Pals provide their Postscript reviews of the Festival, and I'll tag along at the end of those. Right now, a quick nap is in order. Back soon.