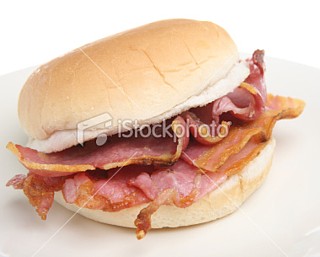 It's been a golden rule of Fringe promotion for decades: if you offer audiences free food, they will come. And that applies double for breakfast.  The Fringe show Shakespeare For Breakfast has used it successfully as their business model for yonks now, and more recently the Traverse has been getting in on the act with a series of 9am performances. Hence the hordes of people descending on the theatre bar at 8.45am to claim their free breakfast roll and coffee. They're followed at 8.55am by whiny old women complaining that they won't have time to finish their roll before the play starts why can't they take it inside wah wah wah IT'S FREE SHUT UP.

It would be all too easy to focus on the food and forget about the theatre, so let's not do that. Sabrina Mahfouz's Clean turns out to be a perfect piece of entertainment for this sensitive time of the morning - not too cerebral, not too dark. Three female criminals - Zainab (Emma Dennis-Edwards), Chloe (Jade Anouka) and Katya (Chloe Massey) - are brought together against their will to plan the job of their lives. Mahfouz cleverly keeps the three characters apart for quite a while, allowing us to get to know them through individual monologues before we see the inevitable clash of personalities that happens when they mix. Written in an ear-catching free verse style, and energetically played by all three actresses, it's an action-packed forty minutes - a more rambly playwright may have tried to stretch a full sixty minutes or more out of this scenario, but Mahfouz has pared it down to a telly hour minus the ad breaks, which is just about right.

From there it's on to the Queen's Hall for one of their morning International Festival concerts, which seem to have accidentally become a regular feature of our Festival visits. Today's show features clarinettist Nicola Boud: the unique selling point of this performance appears to be that she'll be playing three different clarinets, replicas of instrument styles that were popular in the 18th and 19th century. So I have to be a total Philistine at this point and say that they all sound the same to me. What's really interesting, though, is her accompanist Kristian Bezuidenhout, who does a similar thing with the keyboard instruments used. The second half of the programme uses an 1851 Erard, which is something close to the concert grand we usually expect today: but the first half is played on a copy of the earlier fortepiano, which has a more harpsichordy twang at the low end.

Boud plays four pieces, three of them trios with guest musicians - Sophie Gent on viola for Mozart's E flat major trio, Sabine Devieilhe singing Schubert's Der Hirt auf dem Felsen quite beautifully, and Jane Gower's bassoon taking more of a front role in Glinka's Trio Pathetique. By contrast, when it's just down to Boud and Bezuidenhout on their own for the closing Brahms Sonata in E flat major, you find yourself missing the extra tonal colour that the other players bring. Still, the Brahms has other attractions, notably surprising amounts of jazzy syncopation in its rhythms - it almost feels like it's going to break out into ragtime towards the end. Don't believe me? Have a listen for yourself: the whole concert was broadcast live on Radio 3, and it's available on the iPlayer until August 21st. 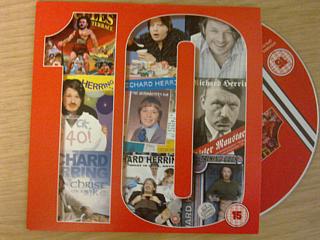 For the first time since 1998, I've recklessly chosen to see a couple of Richard Herring's Fringe shows on the same day. It's easy enough to pull off, as he's doing two different shows every day, plus guest slots at various other shows, not to mention this monstrosity that happened on Monday. During his introduction to Richard Herring's Edinburgh Fringe Podcast, he complains that not only does he have to suffer being continually called The King Of Edinburgh (a phrase used once in a review that he's hammered to death in publicity ever since), but he's now being held up by some mysteriously unnamed source as being The Spirit Of The Fringe. Which is awkward for him, as that's the title of an award that gets presented to artists every year, and he wouldn't want people to be confused by that.

But the unnamed source (even if it is him ("I am him")) has a kind of point - for an established mainstream performer, it's good that he takes risks with all sorts of different shows. Audiences are used to the peculiarly ramshackle nature of these podcasts by now: particularly today, when Sarah Millican comes back for her guest third appearance in three years. The previous two have been hysterical - Herring tends to go a lot easier on his female interviewees, and Millican spots this weakness and subsequently tears into him. This one isn't such a whitewash, as Herring's done a small amount of preparation this time, insisting that Millican isn't quite as repulsive to him since her tarted-up Geordie Shore parody on her TV show. But she continues to give as good as she gets, making for several big laughs along the way.

There's a lull in the middle with guest stand-up Geoff Norcott, a Christian Tory comic who has contrarianism on his side but not quite enough jokes: and neither The BBG nor I manage to win the prize quiz at the end, because we don't know Sarah Millican's middle name. And The BBG spends part of the show in a grump about The Stand now longer selling 5am Saint at the bar. But it's a very entertaining hour despite all that, and as ever it's available on Soundcloud until the end of time (or the end of Soundcloud, whichever comes first).

Later on today - not immediately after, but I'm rearranging the chronology a little so we don't end up with two Richard Herring photos on the page, nobody wants that - we catch his stand-up show for this year, the cheerfully-titled We're All Going To Die! Herring's themed sets have covered many big topics over the years - love, religion, fascism, yoghurt - so death fits nicely into that trend. What happens when we die, and why do we fear it so much? How did the various taboos around our discussion of death evolve over the years? And if the afterlife is based around the ongoing existence of the soul rather than the body, how is dead Herring going to be able to have a wank?

As ever, Herring's show is a tightly constructed, speedily delivered mixture of philosophical musing, absurd over-analysis, and pure and simple filth. And as ever, you do find yourself waiting for the filth to get out of the way so you can move on to the more interesting stuff - I appreciate that it's all part of the rich tapestry of his show construction, but when you've seen a few of these over the years you do find yourself thinking "not another five minutes about masturbation". WAGTD (wagtd!) doesn't have the emotional kick that some of Herring's more recent shows have surprised you with, but it does contain several brilliant comic setpieces, and in an embarrassment of riches appears to have two separate climaxes, like a more cock-obsessed Lord Of The Rings. All this and a free DVD! 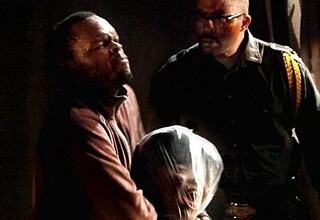 Earlier in the day (see note on non-linear structure above) we return to the Pleasance for Cadre, a story that follows a young South African boy from the apartheid hell of the sixties to the present day. As a teenager, Gregory (played by writer/director Omphile Molusi) finds his experience of the struggle defined by the example of his renegade brother, who left the family to join a group of freedom fighters. Gregory finds himself drawn to the same path, and as South Africa changes, he finds himself changing with it.

The main emotion I took away from Cadre was, shockingly, nostalgia. Not for apartheid, obviously - but nostalgia for the Fringe in the early nineties, when roughly fifty per cent of all the plays performed involved South Africans being beastly to each other. Without wishing to take anything away from Molusi's story, it's one that we've heard many times before, and Cadre doesn't really do anything new with it. As theatre, it's got a lot going for it - Sello Motloung and Lillian Tshabalala do astonishing work playing every other role, and the versatile set design and use of lighting and shadows is notable. But dramatically, it doesn't really add up to much.

So, just to clarify the timeline - we see RHEFP, Cadre, Herring again, then follow it up with dinner at Holyrood 9a and a walk down Cowgate, looking for a free show to keep up our one-a-day record. And we stumble across a surprise at the Dram House: Marcel Lucont's Cabaret Fantastique, due to start in a few minutes at 11pm. Lucont was one of our Free Fringe discoveries back in 2011: how did we miss that he was hosting a nightly cabaret slot? Lucont explains in his opening monologue: "zis is a show zat wasn't even put in ze programme,  to keep people away from it. But you fuckers..."

It's true, a lot of Lucont's appeal comes from hearing him say rude things in an outrageous French accent. But it works, so I'm not going to argue. He's in fine snobby form, singing a couple of songs and insulting members of the audience who come from inferior countries. But he's also there to introduce a random collection of other acts from the free fringe. At this show, Leonie Higgins does a couple of lovely songs with the aid of a loop unit and beatboxer Ben Mellor (as seen on Stutter on Sunday): Mellor comes back to do some of his own comic poems: and Dayne Rathbone freaks people out to perfection with his worrying children's stories.

The whole show is wrapped up with a demented audience talent contest, where Lucont's despair at its collapse is even more entertaining than the performances. It's an entertaining capper to a show that fits into that Spirit Of The Fringe idea even more than anything Herring does, largely because it's a show that people only seem to be discovering by accident. It's on at the Dram House on Cowgate at 11pm, last performance on Saturday August 17th - if you're in town, look out for it. (And if you're not, don't, obviously.)