Home Archives/Categories About Me RSS Feed Mailing List Email
Spank's Edinburgh Diary, Postscript 2013
Tie You Down, Pretend You're Madonna: Pick Of The Year 1989 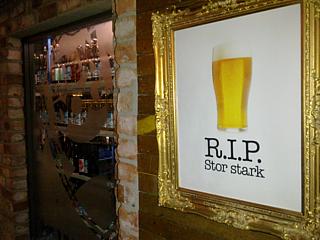 "I'm a man on the move," I quote Sir Les Patterson as saying at the start of my latest piece for Mostly Film. That piece was actually published one week ago. I know I normally let you know about these things a little sooner than that, but I really have been a man on the move for the past couple of weeks, and haven't had time to do much on the site. Followers of my Twatfeed will know what I'm alluding to: the rest of you will hear about it in far too much detail soon enough, I promise you.

In the meantime, that Mostly Film piece is the latest one in the ongoing Monoglot Movie Club series. Stockholm Syndrome is my second roundup of contemporary Swedish cinema this year, after The Guldbagge Variations last winter. This one actually draws on two separate visits I made to Stockholm in August: one on my own for work, and one with The Belated Birthday Girl for some birthday or other that I was having. As is traditional, I'll use this piece on my own site to promote its companion on Mostly Film, and throw in some bonus travel tips for Stockholm along the way.

Regular readers will have already guessed what tip number one is going to be.

BrewDog Stockholm - the first overseas bar opened by the brewery, and the tenth one we've visited in our ongoing quest to do them all this year - was still under construction when I was there in January. Still, because The BBG was curious, I took a photo of the former tanning salon they were converting. In April or thereabouts, it finally opened: and in August, we got to see it for ourselves.

Stockholm isn't short of bars, but it seems from a cursory examination that craft beer is mostly limited to a small number of bars and restaurants. Generic strong lagers - or in the local lingo, stor stark - seem to be more the norm, hence the surreal funeral service that launched BrewDog Stockholm back in the spring. A few months into its life, the bar certainly seems to be popular enough on a Friday night. There was a mix of passing trade and bedded-in drinkers, one of whom appeared to be working his way up the beer range by ascending ABV, asking at one point "what's the next one up from Cocoa Psycho?"

Still, there's a major culture shock to come for any British BrewDog regular. When you look at the price boards at the back and mentally convert them from krona to sterling, you initially wince a bit, but appreciate that beer's going to be a tad more expensive in a country that taxes alcohol so heavily. And then you discover those prices aren't for pints like you expected: they're for halves. Thus a small glass of their basic session ale Dead Pony Club ends up costing well over a fiver, and as you work up the ABV scale the prices go through the roof. By the time you hit the 32% fun of Tactical Nuclear Penguin, you're pretty much anesthetised to the revelation that they only sell it in 1 cl measures to keep the price within Swedish levels of acceptability.

Get yourself over that hurdle - either by nursing drinks for longer than usual, or sticking to 0.5% Nanny State - and there's a lot to like about the Stockholm bar. The staff are typically friendly, the decor is typically quirky. But the real USP is upstairs, because this - I think - is the only BrewDog establishment with a dedicated restaurant attached. The menu's not displayed that clearly, but it's worth asking for as there's some fine stuff on it. On the night, I had a decent sloppy burger, while The BBG had rimmad lax, a variation on a Swedish dish involving salmon served with things that rhyme with it. And, of course, you can drink beer with your food, as long as you've got enough money left over to pay for it. You can book for the restaurant on their Facebook page, or get lucky with a walk-in like we did.

Not in the mood for hyperpriced beer? No problem, Stockholm has plenty of other stuff available for you. Let's go bulletpointy.