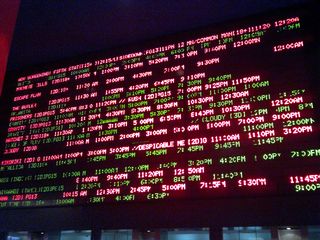 Little Souvenir Of A Colourful Year: Pick Of The Year 1990 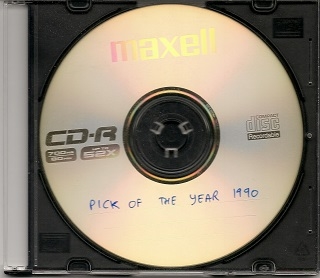 Here’s where the story doesn't so much end, as go into an unexpected three-year hiatus.

As you’ve seen from the previous articles in this series, between 1982 and 1989 I created an annual series of compilation tapes, gathering together three hours or so of my favourite songs from the year just passed. You’ve probably gathered by now that a lot of effort went into these. I refer you to what I said in the context of the 1990 London Film Festival: “Yes, you'd be right: I wasn't getting any at the time, since you ask. And then, suddenly, in the autumn of 1990, I was.”

Apparently back then I was so good at sex that I didn't have time to do anything else. So my LFF attendance record dropped off dramatically compared with the previous year, and I never got around to making a compilation for Christmas 1990. One year later, things had calmed down a bit, but I'd lost the momentum, hence no Pick Of The Year for 1991 or 1992 either. It wasn't until 1993 that a pub conversation with Lou drove me back to the tape decks to restart the series, which has carried on uninterrupted ever since.

Jump forward to 2011. I'd spent the past year assembling huge chunks of this website into a series of generally-ignored books, focussing on the festival reviews and the travel articles. It struck me that the POTY compilations would be an ideal subject for another volume, but there were two problems. Firstly, I hadn't got around to writing up the details of the cassettes I'd made between 1982 and 1989: but as you can see, those are covered now. The more fundamental problem was that I hadn't made any compilations at all for 1990-1992.

So on one evening in 2011 - I feel I should be able to tell you the date, but I can't, sorry - I pulled out all of the records in my collection that were released between 1990 and 1992, and made a series of snap decisions that resulted in three 80-minute CD compilations for those years. Obviously, these were compiled in very different circumstances from all the other POTYs I've written about: they're not a snapshot of my mental state at the time the records came out, and are inevitably coloured by two decades of hindsight. I've tried to limit the selections to songs that I think meant the most to me at the time, but I know for a fact that a couple of these only really had an impact in the years to follow. Still: they're the best we've got in the circumstances.

Continue reading "Little Souvenir Of A Colourful Year: Pick Of The Year 1990" » 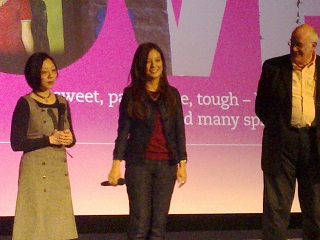 This is how we usually finish off a London Film Festival: summaries of the highlights and lowlights from your 2013 reviewing team of me, The Cineaste and The Belated Birthday Girl. We also have special guest appearances from Lesley and Chris, with their own film-by-film thoughts on how it all went. (Films being reviewed here for the first time are highlighted in bold.)

Vicki Zhao's So Young doesn't appear in any of our lists, but the photo on the left is the only celeb picture I took this festival, and it looks nice, so it stays.

Reviewed today: A Long And Happy Life, Night Moves, Rigor Mortis, So Young, Tracks, Why Don't You Play In Hell?

Reviewed today: Aatsinki: The Story Of Arctic Cowboys, Kon-Tiki, Our Sunhi, A Street In Palermo, A Time In Quchi.