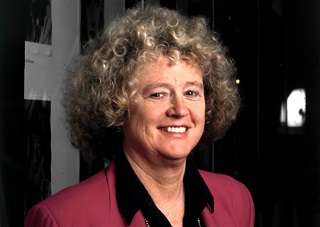 When I first started attending the London Film Festival, it was being run by a woman called Sheila Whitaker. Her immediate successors - Adrian Wootton and Sandra Hebron - may have done more to broaden the scope and appeal of the Festival, but they were just building on the initial work that Sheila did. During the decade she was in charge of the LFF, she gradually moved it out of its South Bank ghetto and into the West End where it couldn't be ignored. She was my first LFF director, and like your first Doctor Who that's always a tough act to follow. She died in July of this year, and she'll be sadly missed.

I first started attending the London Film Festival in 1989. And I've been there every year since, rain or shine. So this is my 25th. Ulp.

These days, it's Clare Stewart who's in charge of the LFF, and this is her second year in the job. The changes she brought in last year - a programme grouped by vague emotional categories rather than country of origin, a running time of twelve days rather than sixteen, a generic trailer that could be for a film festival anywhere in the world, and the removal of priority postal booking - are all still in place, and I suspect we're stuck with those for the forseeable future. Although that last one may change, given the spectacular fustercluck that the first day of online booking turned into. I personally find it easier to keep pretending that it's still 1989, and put my ticket application in the post like I always did - it's infinitely less stressful, and almost anything you don't get in the initial sales period can be picked up in early October when the spare corporate tickets are released.

There are a couple more changes to note this year, however - and I'm being kind and just noting them, we can wait to see if they become an issue in future years. Some of these have slipped under the radar: the partial folding of the Archive section into the other film categories, and the curious absence of an animation programme. The first of those could be charitably looked at as a way of giving the archive screenings a higher profile rather than hiding them at the back of the programme, and I'm happy if that's the case given that they're usually an unsung highlight of the LFF. The latter is a little more worrying: animation programmer Jayne Pilling is still being credited as part of the team, so maybe there just isn't enough good stuff out there this year? We can come back to that when we get to the 2014 British Animation Awards. (Assuming there is a 2014 British Animation Awards...)

But if you follow a lot of UK film people on Twitter like I do, then there's only one change to proceedings that matters, and apparently it's the worst thing in the world. Because a press pass to the LFF used to be free, and now it costs £30. Partly, I suspect this move has been driven by the definition of 'press' being stretched over the last few years to include anyone who wants to review films for their own website. Inevitably, it's resulted in terabytes worth of self-entitled whining from people who are being asked to pay a total of £30 to attend a couple of weeks of press screenings as well as the festival itself, and think that's too much. "Why do I have to pay to give the LFF all the free publicity my reviews provide?" is the typical question being asked by a blogger getting an average of 5 hits per day. As a self-confessed optimist, I'm looking at it from the opposite angle: a press fee of £30 means that less of my BFI membership fee goes towards subsidising your shitty little blog.

My shitty little blog has been publishing daily reviews of the LFF since 1998. I've never applied for press accreditation in all that time. That's partly because, in the early days, that would have seemed like the most ludicrous idea in the world. Whereas these days - well, a) I'm too lazy, b) I like the freedom of being able to write what I want without feeling any sort of obligation towards the BFI, and c) I like the LFF as a social event - going along to these films with my friends, at times when they can come along with me, rather than 9am press screenings in the rat-infested journo camp that is the Cineworld Trocadero. (No disrespect to my hard-working colleagues at Mostly Film, however, who have paid the accreditation fee like grown-ups and will be covering the Festival as it happens.)

This festival - like the twenty-four others before it - is going to cost me a damn sight more than £30. But I'm doing this for fun, and don't think of my attendance as being some sort of human rights issue, so I don't care. And as ever, I'll be posting daily updates here about the films I've seen, with occasional contributions from Spank's Pals if they have any additional insights to offer. Let's do this one for Sheila, shall we? Watch this space.