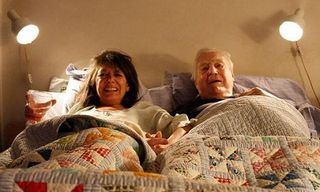 3.00pm: The Sarnos: A Life In Dirty Movies [official site]

The Belated Birthday Girl and I have come to a very civilised agreement: I'm going off to see a movie about pornography, and she's going off to see something else. Except... it turns out that it's a little more complicated than that.

Over the years, Joe Sarno has directed over 70 sex films. From early on he's been assisted by his wife Peggy, an actress who's had non-performing roles (if you know what I mean) in many of them, and has been by Joe's side for several decades. Wiktor Eriksson's documentary looks back at Joe and Peggy's life and work, and checks in to see what they're up to now.

Generally, Sarno made softcore films, preferring to imply the act rather than focus on it. I like his theory that if an actress can get the breathing right, you hardly need to show anything below the neck. Sadly, punters in the seventies didn't feel the same way, and the hardcore boom put a huge dent in his popularity. But three decades later, his work is being reassessed: we see Joe giving talks at fancy places like BFI Southbank, and wondering out loud if it's the right time for him to make another film.

There are many pleasures to be had from The Sarnos, and the least of them is the one implied by the title. As at least one interviewee points out, having a wank to a Joe Sarno film was always difficult, given his desire to tell stories first and present sex second. The trick was always to have a lurid title that would draw in the punters: once you had them in the cinema, you could do what you liked. Part of this film is, of necessity, a brief history of 20th century moving image porn, with the usual suspects like John Waters and Annie Sprinkle turning up to provide quotable insights.

But it's the Sarnos themselves who are the real stars. Joe is in his eighties when we meet him, slightly dazed by his rediscovery, and itching to get back to work. The seventeen-years-younger Peggy is the pragmatist of the pair, more aware than Joe that any movie project he takes on at this stage will become a race against time. As we watch them in their New York apartment, or chilling in their holiday home in Stockholm, we gradually realise that Eriksson has learned a valuable lesson from Sarno: he's drawn us in with a lurid title, but is really giving us a portrait of a long-time couple settling into the twilight years of their lives. It's just coincidence that they happen to have had a very interesting past, too. They're a delightful pair to spend time with, and give those of us in relationships now something to aspire to in the future. 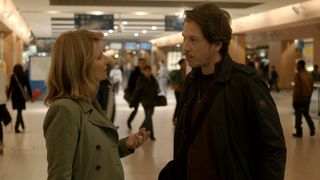 Ba ba baaaaaa ba. It's the four-note jingle that precedes station announcements on the French SNCF rail network. It's also the text message tone on my phone, thanks to a cropped version of Markus Hablizel's field recording of Gare du Nord station. The BBG associates the sound with our occasional Eurostar trips to Paris, so she's been singing it round the house during the few days leading up to this film. Imagine her delight when Marc Ribot's opening title music turned out to be a series of variations on those four notes! (Listen carefully to the first 30 seconds of the trailer.) Unfortunately, the film goes a bit downhill from there.

Which is a shame, because Claire Simon's film has an interesting starting point. Ismael (Reda Kateb) is a student interviewing the people he meets at Gare du Nord station, gathering data for a thesis about how it's a microcosm of the entire world. He becomes friendly with Mathilde (Nicole Garcia), a retired academic who regularly passes through the station on her way to hospital appointments. She accompanies Ismael on his surveys, and through her we get to meet the people of many nationalities, socio-economic groups and mental health classifications that inhabit any major railway station. Along the way, we spend a little more time with two of them in particular. Joan (Monia Chokri) is a harrassed estate agent trying to balance work and family: Sacha (François Damiens) is a TV host looking for his missing daughter.

Initially, Gare du Nord is fascinating: Ismael's interviews have a loose, semi-improvised feel to them, so you're never quite sure if he's talking to real people or actors. Either way, what we end up with is a series of microscopic insights into dozens of people's lives, like a diverse anthology of really short stories. If the film had had the nerve to stay like that, it could have been something special, but after an hour or so it locks its focus down on the four characters we know are being played by actors. And to be honest, they're not as interesting as the real people - or 'real' people - we met earlier: their stories are more obviously manufactured for dramatic impact. We don't really care all that much about Ismael, Mathilde, Joan and Sacha: and it would appear that Claire Simon doesn't either, given the dismissive way that a couple of their tales are abruptly terminated rather than given a satisfying ending.

Gare du Nord is a frustratingly missed opportunity, starting well but losing its way as it goes. Still, look on the bright side: at least you've got a free 60kb downloadable ringtone out of it.

The Belated Birthday Girl - One of the highlights of this year's Manchester International Festival for me was The Machine, a play about the 1997 chess match between IBM's Deep Blue computer and Grand Master chess genius Garry Kasparov. Andrew Bujalski's film is set more than a decade before that historic encounter, at a tournament where computer chess programs face off against each other, with the winning program getting a match against a lesser Grand Master than the legendary Kasparov. The tournament takes place over a weekend in a hotel which is also playing host to a couples therapy group session.

Shot on modified Sony video cameras from the late '70s, Computer Chess has very much the look of the period, to the extent that interviews with tournament participants at the start of the film could easily be taken for actual archive footage, and in the beginning we feel we could be watching a documentary about an actual computer chess tournament from the '80s. The characters and quirks of the tournament participants, their discussions and relations with each other are handled with dry humour. But there are a few surreal touches, and these increase as we start to see the encounters with the couples therapy group, and by the end, we are in a somewhat different film to the one we think we will be seeing at the start.

While I was watching the film, I wanted to keep with the computer geeks, and their computers, and felt that digressions to the other elements were unnecessary padding to set a period tone, and I was frustrated that a particular storyline set up wasn't played to its conclusion and that the film didn't take the direction I wanted it to. But by the end of the film, it is clear that the other elements were not there just to set the tone, and certainly were not padding but were central to the film. Thinking about it after the end of the film, and particularly after a very interesting post-screening Q&A with the film's producer, I think that my dissatisfactions were largely caused by my own expectations. The Q&A was illuminative about the casting of the various parts, particularly the uses made of professional and non-professional actors to add to the contrast between the two groups at the hotel, and was also very informative about the process of getting and modifying the cameras to give the film its look.

Although Computer Chess wasn't the film I wanted it to be, I still enjoyed the film it was, and if you don't go into it with a set idea, and are prepared for something a little more experimental and surreal, you may not have the same issues.