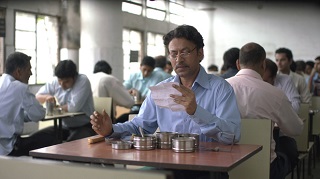 We’ve managed to get through almost the entire festival this year without the usual transport screwups. However, planned works on the Northern Line and unplanned works on London Overground conspire to mess up our plans for the day, starting off with us getting into this screening at around 3.10pm. It doesn’t appear to be too much of an issue, because this is a film that’s in the LFF’s Official Competition, which means a couple of things: firstly it costs TWENTY QUID to see it, and secondly it’s topped and tailed with a discussion with writer/director Ritesh Batra, which means we only missed a small amount of actual film. To be fair, Batra almost earns his money with the single best quote of any Q&A this year, as he discusses how much the characters in The Lunchbox are based on real life: "filmmaking is all about pissing off the people you know to impress people you'll never meet."

It amuses me to imagine – although I’m pretty certain this isn’t the case – that the small part of the pre-credit sequence we missed has an explanation for the one otherwise unexplained mystery of The Lunchbox’s plot. It's based around the Indian system where a team of wallahs ferries hot lunches from restaurants and devoted wives to office workers in the city. It's a huge undertaking which has been carefully studied by experts at Harvard, who have marvelled at how the system never goes wrong. But something's gone wrong, and every day Sajaan (Irrfan Khan) is receiving somebody else’s lunch. He's impressed by how good the food is, knowing nothing of its backstory: in fact, these lunches are being cooked by Ila (Nimnat Kaur) as an attempt to win back the affections of her wandering husband.

Once she realises that the lunchboxes aren’t getting to their intended destination, Ila starts putting notes inside them to find out what’s happening. And Sajaan decides to write notes back to her. What follows over a period of several months is the nicest-smelling correspondence ever depicted on film, one that inevitably starts showing signs of blossoming into something else.

It's a lightweight little story, but with a lot of charm to it. It plays well to the receptive twenty-quid-a-head audience, one that curiously finds that even lines like “my wife is dead” are worthy of a chuckle. Thankfully, it’s played out without a hint of the melodrama we normally associate with commercial Indian cinema: it’s a European co-production, and you suspect that Batra is keen to have his story appreciated by more than just an Indian audience. If there’s a flaw in the film, it’s the way that Sajaan’s age is assumed to be a stumbling block in the relationship. Iffran Khan isn’t real life old, he’s Bollywood movie star old, and looks damn fine with it – they could have got someone as old as Amitabh Bachchan to play the lead, and it still wouldn't be a problem to anyone except the characters in the film. Still, it makes for delightful Saturday afternoon viewing, and does the right thing regarding its ending. I think. 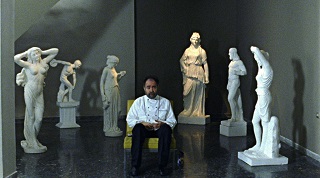 It appears to be a day for professional reviewer-type behaviour: we turn up to the first film of the day late, and to the second one pissed. Blame - inevitably - the good people at BrewDog, who this weekend are running a festival in their bars showcasing eleven collaboration beers they've made in conjunction with small breweries around the UK. In a wholly unbiased, objective, it's-not-just-that-he's-a-friend-of-a-friend-honestly way, The BBG and I can wholeheartedly recommend WeirdBeard's Camden BearD, with the coconutty Pirate Badger Attacks from Arbor Ales coming a close second.

Anyway, I’m prepared to admit that the seven beers we sampled beforehand - in responsible quantities, mind you - may have had a detrimental impact on the slow-paced satirical Greek comedy we saw immediately afterwards. Antonis Paraskevas (Christos Stergioglou) is a much loved daytime TV star in Greece, and has been for 30 years. But he's mysteriously gone missing, leaving behind only a cloud of debts, and nobody knows where he is. We know, of course: he's hiding out in a deserted hotel during the Christmas off-season, waiting for his accomplice to make the ransom demand.

This turns out to be a film of two halves, the first one passing as another example of the one-character-one-location movies we’ve seen so many of this festival. Initially, the film concentrates on the drudgery of Paraskevas’ daily routine in the hotel. and doesn't really attempt to make it seem at all interesting. Director Elina Psykou admitted in the post-film Q&A that she's influenced by Michael Haneke - yeah, thanks for keeping that one quiet until I'd bought the ticket - and the combination of the minimal action and the Hanekean detached perspective doesn't make for particularly entertaining cinema.

The second half picks up a bit, though, as Antonis leaves the hotel and discovers his plan wasn't quite as successful as he thought - though again, it's entirely seen from a detached perspective, featuring very little interaction with anyone else. But there are some intriguing sequences here and there, mainly occurring in retrospect, once the director has said in the Q&A that she sees Antonis' plight as symbolic of that of Greece as a country. So the satire promised in the programme writeup is there after all: but it needs to be explained by the director in person after the film, which is never a good sign.

The Cineaste - This is an engrossing, taut study of modern family life. Director Asghar Farhadi has put together a wonderful piece here as various family secrets get revealed during the course of a few days to everybody’s discomfort.

Iranian Ahmad has arrived from Tehran to finalise the divorce from his wife (she lives in the Paris suburbs with her new boy-friend Samir). Mature characters, they’re able to get on amicably. Ahmad has been away for four years, and mild curiosity prompts him to start delving into what’s been happening to his assorted family during that intervening time – his wife Marie herself, her teenage daughter (whose dad is one of Marie’s several ex’s and lives in Brussels), and even the family background of Marie’s new boyfriend. More family and step family get prominence as the film unravels.

Farhadi handles the situation with terrific aplomb. Without any need for melodrama we get a gradual succession of devastating family secrets to grip the attention – why Lucie hates her mum’s new boyfriend, what awful situation befell Samir’s wife, what may be a factor in making Samir’s son such a difficult child. This is gripping drama, an elegant mature piece of film-making that never drags.

The Cineaste - Tom Selznick (Elijah Wood) arrives in Chicago to give a piano concert. A deified pianist, his return to the concert stage has been hugely anticipated – it’s been an agonising five-year absence since his last performance, an embarrassing rendition when everything went wrong. His glamorous wife, a hugely-adored actress and excellent soprano herself, has been instrumental in pulling a few strings and persuading Tom to return to action. So, with full orchestral support, and on a very special piano, Tom’s hoping to regain some confidence, and move on to happier times.

So he’s is understandably nervous. But that’s nothing compares to what he’s about to experience – as the film veers down the genre of absurdist surrealist giallo thriller, Tom starts hearing a voice in his head from an other-worldly source. It’s the voice of a psychopathic madman, telling Tom there’s a gun trained on him and his wife, and unless Tom plays his whole (very tricky) piece note-perfect, then it’s curtains for the pair of them.

To say anything more would rob the viewer of the numerous twists and jolts found within Damien Chazelle's screenplay, but if the set-up sounds entertaining enough already, the presentation is even better. Director Eugenio Mira is clearly intent on giving his audience a visual feast to go along with the lovely music and the slowly mounting suspense. As the music and the intensity build to a feverish finale, the viewer is treated to a wide variety of camera tricks and visual flourishes that add style, class, and energy to a concept that could easily have come off as dry, dull, or silly. The whole film is a brilliantly entertaining feast of escapism.