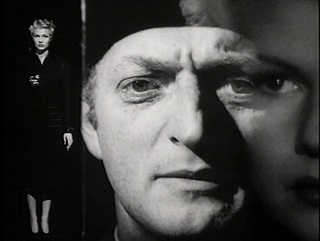 The Belated Birthday Girl has a theory that the Treasures From The Archive section of the LFF is being slowly sidelined, or even phased out. It may or may not just be a conspiracy theory, but she can quote you plenty of evidence. In this year's programme booklet, the actual Treasures listing has been reduced to a single page of cross-references to the main programme sections. Thus, for example, this screening of The Lady From Shanghai is listed as a Thrill rather than a Treasure, and is announced as such on-screen at the beginning of the performance. The BBG will, when pushed, also accuse Clare Stewart of playing down the restoration aspect of Model Shop when she introduced it last Saturday. And then there's today, when Shanghai is presented without any introduction or fanfare, even though the programme claims that this Grover Crisp restoration is being shown today for the first time anywhere in the world. Presumably the upcoming Saturday evening screening is being treated as the world premiere rather than this matinee, but it's still all a bit iffy.

Anyway, let's talk about the film. Or can we? With something as iconic as Orson Welles' 1947 noir, it's possible that everything that you could say about it has already been said. Welles and his terrible Irish accent, to be sure, have a chance encounter with Rita Heyworth in a horse-drawn buggy in Central Park. She's Elsa Bannister, the wife of a sleazy lawyer: he's Michael O'Hara, a sailor with a murky past. Within a day, O'Hara has joined the crew on the Bannisters' fancy yacht for a voyage around South America. O'Hara has told us in voiceover from the beginning just how much trouble Bannister is: we get to watch them and wait to see how bad that trouble gets.

Dodgy accent aside, Shanghai has all the pleasures we expect from forties noir: people behaving as appallingly as they possibly can, and looking damn sexy as they do it, confident that there's a fall guy somewhere who can take the rap. Welles' visual sense is as ambitious as ever, and if anything this restoration shows up some of the underpinnings of his original effects: but when a film looks as good as this one does, you quickly forget to look out for the flaws and just enjoy the ride.

If you're looking for any sort of original insight into the film, the best I can manage is this. The trippy climax in the fairground hall of mirrors has been much imitated, most notably in Enter The Dragon. I'm ashamed to admit that it's only today, thirty years after first watching Dragon, that it's occurred to me that there's no reason whatsoever for the baddie to have a gigantic room full of rotating mirrors in his island lair. Bull SHIT, Mister Han Man! 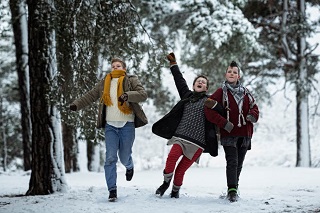 It's Stockholm in 1982, and punk is dead. At least, that's what most people would tell you. You'll hear a different story from Bobo (Mira Barkhammar) and Klara (Mira Grosin), though. Generally treated as the weird girls at their school, it's natural they would gravitate to each other, and discover punk rock as a means of expression. Thanks to a sequence of events at their local youth centre, they suddenly find that they've become a two piece band, despite their complete lack of musical ability. With the recruitment of Hedvig (Liv LeMoyne) on guitar - also an outcast, but for different reasons - the conditions are in place for a new musical force that will destroy the patriarchy, or at least complain to it about having to spend so much time doing PE.

Lukas Moodysson's been making films almost as long as my website's been reporting on them: his opening diptych of Show Me Love and Together marked him out as a brilliant creator of warm, humanist comedies. And then it all went a bit bleak for a decade, what with all the child prostitution and the vomiting into people's mouths and the bathing in ravioli and so on. I would still say there's a case to be made for the first of those, Lilya 4-Ever: a story about a hugely important topic, made into a film that possibly got some of its power from being such an unexpected departure for its director. In the films since then, though, Moodysson has lost me, and I suspect several other fans as well.

We Are The Best! shows Moodysson back on comic form, with a movie that tonally follows on perfectly from Together. It's not all sweetness and light, though. With his depiction of the girls' treatment at school, particularly by the boys, Moodysson acknowledges the dark undercurrent below the happy liberal image of Sweden - maybe not to the same coruscating degree as something like Call Girl, but the hints are there nonetheless. Generally, however, the tone is upbeat and cheerful - the kids proving themselves to be in charge of their own destiny, the adults behaving in a more infantile fashion.

The cast are filmed in Moodysson's trademark naturalistic style, and play the comedy beautifully. It's never just about gags: the biggest laughs come from character, as becomes apparent in the section where the girls meet up with their male doppelgangers (who also have the best song of the movie, Brezhnev Reagan Fuck Off). There are, it's true, a few jokes scattered through the film that are aimed at an audience more familiar with Swedish culture and geography. For my part, I was delighted to discover that the Swedes are as confused as I am over whether Solna is a suburb or a city. But the majority of the comedy is universal - anyone who never fit in completely as a teenager will find plenty to recognise here. It's good to have Moodysson back. 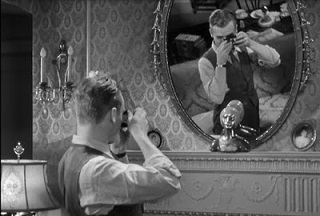 Tonight's bill is a pair of films from the beginning and the end of the pre-Code era, both of them having James Cagney in common. In 1930's The Doorway To Hell, he's actually playing a supporting role, the second-in-command to crime boss Louis Ricano (Lew Ayres). After years of building up an empire through the usual means, Ricano decides it's time to retire with his girl and write his memoirs. But to quote another crime boss, just when he thought he was out, they pull him back in.

The Doorway To Hell feels more like theatre than cinema: largely shot indoors (apart from a few key action scenes), with very little background sound and no music. (When the opening credits ran over silence, all you could hear was mass tutting from the old farts who blight these screenings by complaining loudly to themselves about everything, assuming it was a projection fault.) The frequent use of long silences is unusual for the period, and gives the movie a curiously airless feel.

Cagney may have been way down in the cast for Doorway, but his twitchy energy inevitably means he steals every scene he's in. By 1933 he was top of the bill for Picture Snatcher, the story of another criminal trying to go straight. Cagney's character Danny Kean moves straight from prison into the job of a picture snatcher at the city's scummiest tabloid paper. Initially, he's literally doing just that, stealing a family photograph from the scene of a marital tragedy. But soon he's got his own camera, and he's out on the streets taking the photos no other paper will touch, gleefully stomping over all manner of ethical boundaries as he does so.

If the previous film felt a bit like theatre, then Picture Snatcher is a movie and never lets you forget it. Its 75 minutes are crammed with incident, including a car chase and a massive gun battle, and it's still genuinely exciting to watch some 80 years later. Cagney rips into the script with his usual enthusiasm, but the likes of Ralph Bellamy as his boss give him some serious competition to play against. It's a terrific film with laughs, thrills and a few genuine moral dilemmas to explore. Granted, it also has a female character whose sole function appears to be to get regularly punched in the face for laughs, but I guess that's what happens when you're not working to a Code.