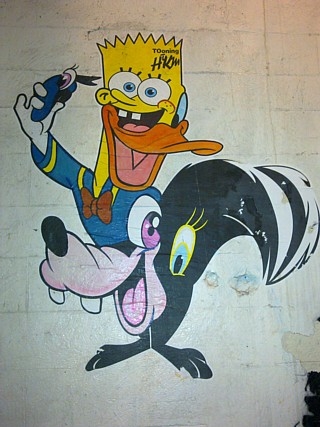 One thing that usually helps keep The BBG happy is a decent hotel, and we certainly got one of those. The process by which we chose 42 The Calls - looking up the BrewDog bar on Google Maps, and then searching for the hotel nearest to it - may have more logic than judgment to it, but the results were certainly impressive. Located in an old converted corn mill, it's an old-fashioned hotel tarted up with dozens of trendy boutique touches, from the frog-shaped bars of soap to the twelve different types of sausages available on the breakfast menu. It's a lovely place to stay even before you factor in the short walk to BrewDog Leeds, although along the way you do have to pass that terrifying piece of street art pictured above.

We also got to try out a few of Leeds' finest restaurants over the weekend. Initially The BBG was convinced that Dish was something I'd made up, particularly once she discovered that one of the dishes on their sample menu combined three of her favourite things on a single plate (scallops, chocolate and chilli). Sadly, that particular dish wasn't available on the day, but the scallopy alternative available on the day went down just fine, as did the gigantic mountain of dead pig that I ended up with. For best views across Leeds, Angelica has a weird location (the sixth floor of the Trinity shopping centre) and a slightly irritating queuing policy, but balances that with terrific food (such as the meat-free Scotch egg made from a quail egg wrapped in salmon) and nice things to look at out the window. And as a Mancunian, I'm greatly amused to see local legend Sam's Chop House leading a cross-Pennine invasion by opening a branch in Leeds: heavily leaning on stodgy British classics, but happy to throw in a veggie black pudding as an alternative.

As for Leeds cultural activities, we managed three out of a possible four. The Leeds International Film Festival was ongoing when we were in town, so we took a train up to the delightful Hyde Park Picture House for an archive screening of Samurai Rebellion, a rarely-screened classic from the director of the original version of Hara-Kiri. The tail end of the LIFF overlapped with the beginning of the Christmas celebrations, so we spent a little time trying to make our way around the ludicrously overcrowded Christmas market, drinking mulled wine and hot punch out of mugs that appeared to have been stolen from Frankfurt market. A nicely relaxed Sunday morning was spent at Leeds City Museum: there's plenty of simian-flavoured fun to be had at the current exhibition of the work of children's illustrator Anthony Browne, but unfortunately I gained equal amusement from spotting the way in which the display of famous Leeds residents has been clumsily purged of all references to Jimmy Savile. The one failure in our weekend involved the Henry Moore Institute, which we planned our whole Sunday afternoon around, without realising until we got inside that it was closed for rehanging. (That's rehanging of a temporary exhibition, by the way, they weren't hoisting around Moore sculptures on bits of rope or anything like that.)

With all that activity during the daytime, that left two evenings free to investigate BrewDog Leeds. It's easily the smallest of the eleven bars we've visited so far, taking up part of the old White Cloth Hall - from outside it looks like a tiny little wedge of a building, barely capable of holding people, never mind a bar. But they've arranged the space effectively: there's plenty of space for standing and sitting across two floors. The decor has a few quirks that conform to what, after eleven bars, now looks like a standard template. The loos are decorated with album cover art, actual sleeves from easy listening classics, which the punters have chosen to enhance with verbal descriptions of Arsenal's 2003 cup campaign and drawings of penises. In a nice twist on this approach, the communal sink area has a collection of unboxed cassettes glued to it, with what appears to be an open invitation to add to - or remove from - the collection as required.

The boards advertising what's on draught are a bit smaller than we're used to, but I guess that's a consequence of the reduced size of the building. Still, what the bar lacks in the BrewDog core range, it makes up for in guest and bottled beers, on this particular weekend showcasing the remarkable work of the Quebecois brewery Dieu du Ciel. We tried three of them, the coffee stout Péché Mortel being a particular highlight.

With a pleasant atmosphere and even more pleasant beer, and located just a couple of minutes walk away from our hotel, we were looking forward to a couple of extended sessions at BrewDog Leeds, which made what happened at 11.20 on both nights all the more surprising: they called last orders. By 11.30, they'd stopped serving, and were presumably looking to have everyone out of the building by the advertised closing time of midnight. I'm assuming this is a condition of their licence, which they notoriously went through an uphill legal battle to acquire. Which is weird, because it's not like the area is short of boozehouses that are open till all hours of the morning (including, while we were there, a pop-up bar that looked for all the world like an illegal squat). It's a shame that one of the few bars that isn't a full-on meat market isn't allowed to stay open longer. And it's not just us who think that: there were plenty of eager drinkers who turned up after 11.30pm on both nights, only to be turned away disappointed.

Still, those quibbles aside, BrewDog Leeds is a friendly little bar with all the good things we've come to expect from the chain, just in a smaller space. Eleven down: one to go. (hashtag #ironicforeshadowing)