Home Archives/Categories About Me RSS Feed Mailing List Email
MOSTLY FILM: The World, Under Construction
You Would Die For Flintlock: Pick Of The Year 1991 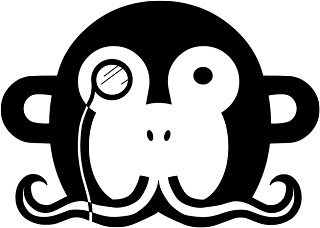 In the meantime, your Simian Substitute Site for November 2013 is Monkey With A Mustache Entertainment. (Yeah, you're right, I found it by just throwing the words 'monkey' and 'moustache' into Google for some reason or other.) It's the homepage of software developer Jerry Belich, used "as an outlet for many of the creative and technical projects that I work on including games, videos, animation, and live shows". You can read Jerry's blog (ominously not updated since January 2013), investigate the magnum opus he calls The Choosatron, or look at some of the other videos and games he's worked on. He appears to be based in Minneapolis, but also makes occasional visits to London, The Capital Of Earth. And who could blame him?

Plenty of stuff to come on the site this month. Regular readers will know there are two ongoing series that I'm looking to wrap up before 2013 comes to an end: and then there's the small matter of September's Hong Kong trip, which I still haven't written a single word about yet. No promises, they'll all be ready when they're ready. Feel free to bitch in the comments box below if you have a problem with that.