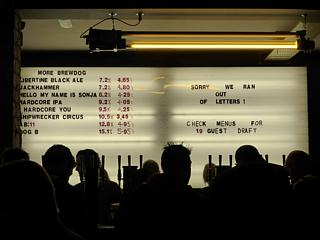 We've been saying it since Bristol: this is a series of twelve articles. Twelve months in the year 2013, twelve BrewDog bars, twelve spaces in The Belated Birthday Girl's diary to document our visits to each one. But even then, we were getting a little ahead of ourselves - two of those bars (Leeds and Stockholm) were still under construction at the start of the year, and didn't open until March and May respectively. And there was always the possibility that the brewery would open another bar before the year was out. If they did that, would we be obliged to include it in our research or not?

That question was pretty much answered for us when BrewDog opened their thirteenth bar at the end of last month, just a short bus ride away from where we live. Hello, new local.

BrewDog Shepherd's Bush - their third London bar after Camden and Shoreditch - opened to the general public on November 30th. The BBG got a sneaky peek at the place one day earlier, thanks to a soft opening specifically for shareholders. I'd been working in Dublin that week, so ended up only making the tail end of that event, bursting through the doors at around half nine still carrying my suitcase. We had a couple of beers there, generally enjoyed the place, but decided to reserve final judgement until we'd witnessed how it all worked on a normal night. So we gave the bar a week or so to bed in, and then went back for a couple of sessions on a Saturday evening, either side of a trip to the movies. (Captain Phillips, since you ask. It's pretty damn good.)

It's a little strange coming to Shepherd's Bush, having previously visited virtually all the other bars in the chain - there are quite a few differences to note. The obvious one is the size: visiting the tiny Leeds branch two weeks earlier may just emphasise the point, but this place is huge. The bar has an insane forty beers on tap, a rough fifty-fifty split between BrewDog's own product and guest brews. Those guests include a number of leftovers from October's Collab Fest, as well as extended selections from old favourites like Stone Brewing, and the people that a nice couple of shareholders we shared a table with referred to as Cirque du Soleil.

But tear your eyes away from the gigantic lightbox that advertises all the beers on offer, and the fridge underneath it holding even more bottles, and you start to notice that a couple of the rougher edges we traditionally associate with a BrewDog bar have been quietly sanded down. A question for the old people out there: remember what Virgin record shops used to be like in the mid seventies, just two hippies in a small room with a couple of dozen racks of records? And remember your bemusement as they evolved into the behemoths they became in the 1980s? Well, that's kind of what's happened here. Shepherd's Bush is the BrewDog Megastore, and I'm still not entirely sure how I feel about that.

For one thing, the aggressive branding has been toned down hugely. The new bar doesn't even have the logo anywhere on its frontage, just the word BrewDog applied over the door in what appears to be blue Letraset. We also don't have the huge etched windows we've come to expect in other bars, just large plain glass things that rely on the accumulated condensation provided by the punters to make them opaque. (Someone should draw a big backwards BrewDog logo in the condensation some time to see what happens.) There are a few bits of graffiti art scattered here and there, but none of the cheeky chalkboards where the staff usually go to express themselves or draw pictures of each other. It feels like a deliberate reaction against the way that BrewDog bars usually make their presence noisily felt.

Despite that low-key presence, it's still a bar on a busy corner of London, so there's a fair amount of passing trade coming through. Possibly more than the staff were expecting: at peak drinking time on Saturday evening, the bar had to pull out the unbranded plastic glasses to cope with the demand.* It's interesting to compare the punters on the soft launch night - people who were already big enough fans of BrewDog to want to invest in it - with the drinkers who were there one week later, just looking for a beer on a Saturday night. The Saturday crowd, it has to be said, had a higher proportion of shouty beer monsters in it than any of the other BrewDog bars I've been in: there was a definite corner in the room that was heavy on the yelling, singing and breakages (they'd gone back to glass again by this point). Meanwhile, the staff are doing their best to help the folks who've just come in off the street and have no idea what the forty beer names on the lightbox even mean.

(On a related matter, can I just put in a quick request to BrewDog management generally? Stop making Fake Lager. Seriously. It's damaging your brand in ways you don't understand. You've obviously realised that you can't run a bar in the UK without selling a lager of some sort or another. And after a clumsy April Fool's day prank, you grudgingly launched Fake Lager as a sop to the lager drinkers who comprise a heavy proportion of the booze market in this country. But what you don't seem to have picked up on is that those lager drinkers hate it. On several occasions this year - most recently at Shepherd's Bush - we've seen guys coming into a bar on what's obviously their first visit, getting a pint of Fake, drinking about an inch out of the top of it, putting the glass down again and walking out the door, presumably never to return. It doesn't work. The thing is, you've actually got a great lager available already - the Unleash The Yeast Pilsen Lager does everything you claimed Fake was going to do. Take its ABV down by a couple of percent so it doesn't scare away the casual drinkers, produce it in bulk, and you could rule the world. Rant over.)

The BBG said to me at one point that Shepherd's Bush was a young bar. She meant it in the context of it only having been in existence for a week or so, but I'd misinterpreted her as meaning that it was a bit light on the middle-aged types like ourselves who tend to be a reasonable proportion of the punters at most other BrewDog venues. Both of those are true, generally. But the former interpretation is one that we should bear in mind when comparing it against the other bars in the group, as it's still very early days yet. It's got a hell of a lot going for it: plenty of space, a world-beating selection of beers, and damn good barbecue courtesy of Texas Joe's (including a cheesy smoked mushroom veggie option, which puts the menu one notch above their similar work at Shoreditch). It's still got to find its personality and establish its clientele, but hopefully time will sort out both of those.

You'd almost think that BrewDog were setting up Shepherd's Bush to be their new flagship bar, if it wasn't for the way in which they're trying to hide it's a BrewDog. It'll be interesting to see how it settles down over the first year or so of its life, and how its design affects the next ones to be opened. Anyway, as I was saying: twelve down, one to go.

* Shortly after the post went up, BrewDog Shepherd's Bush got in touch to point out I'd got it wrong about this: "The plastic glasses are a licensing condition for certain times on QPR home games." Wonder how the Hoops fans get on with Tactical Nuclear Penguin?

You know what's a *good* BrewDog prank? Nanny State. Taking the piss out of detractors accusing them of only making dangerously strong beer, by making a weak beer that tastes wonderful. Fake, on the other hand, seems to me like lager made by people who aren't particularly interested in what it tastes like, only that its existence proves some sort of point.