Home Archives/Categories About Me RSS Feed Mailing List Email
MOSTLY FILM: What The Fox Said Next
Living For The Weekend: A 2014 Diary By The BBG 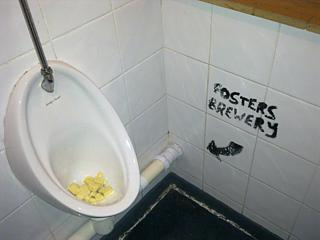 If you’re following me on Twitter, then you’ll know that the BrewDogging Projick was all wrapped up a fortnight ago, thanks to a sudden burst of activity at the end of November. On the last two days of the month, The Belated Birthday Girl and I visited the bars in both Shepherd’s Bush and Nottingham. I tweeted this from the latter:

As at 3.45pm today, The BBG and I have now drunk in all 13 @BrewDog bars, ending up at @BrewDogNotts. twitpic.com/dn4vyd

We subsequently got a response from the official @BrewDog account, suggesting that we were probably the only people to have visited all 13 bars while not actually being on the company payroll. That includes Ian Prise, who famously spent eleven days in June sprinting through all 12 bars that were open at the time, but still hasn’t made it to the just-opened Shepherd’s Bush one yet. In your FACE, Prise!

Anyway, after doing thirteen pubs in a little under ten months, what have we learned? More on that shortly, but let’s look at Nottingham first.

Here’s something we’ve lost in our headlong run towards the digital future. I reckon it’s been a good couple of decades since I was last in Nottingham, and I know that simply because I own an A-Z of the city that was printed in 1994. How’s Google Maps going to give you that sort of information in the future? Still, our previous BrewDog expedition confirmed that a 20-year-old Leeds guide that doesn’t know the location of Millennium Square is about as much use as a Paris guide where all the prices are in francs. But as this was only a day trip, we only really needed a rough idea of how the city centre was laid out.

There’s a sexy looking tram network in Nottingham (that wasn’t there in 1994 either), but we never got to use it, as everything we visited was no more than two stops away from the main station, which is less than ten minutes walk. Our first port of call was Nottingham Contemporary, where there were two rather good temporary exhibitions. Asco were a Hispanic art collective working out of Los Angeles in the seventies, using satire and pranks to protest against how their racial group was at best ignored, and at worst violently oppressed. Geoffrey Farmer has created a huge sculpture and sound collage, tangentially inspired by the life and work of Frank Zappa. Both exhibitions have a degree of wit to them that lifts them above the usual rut that conceptual art can sometimes inhabit – if you’re in the area before they close on January 5th, they’re both well worth catching. And they're free! Did I mention the free part? 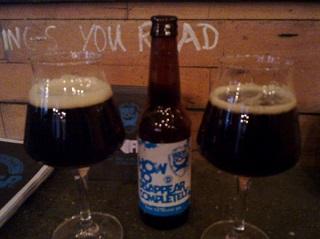 Closer to the centre of town, there are more traditional shopping pleasures, including the German Christmas market that every major British city now has to contain by law. I paid what I think is my first ever visit to Page 45, Nottingham’s famous comic shop, and had a nice wee natter with the staff about the copy of Matt Fraction’s Hawkeye I was buying. (It could have been a more awkward conversation if I’d gone with my original plan of picking up Fraction’s Sex Criminals.) As we got closer to BrewDog's location, the food and drink options opened up exponentially: on Broad Street itself, we had a lunchtime tea break at Lee Rosy’s and a spectacular curry at Kayal.

But BrewDog Nottingham was obviously our main reason for being there. And having spent the previous evening getting our first glimpse of the curiously toned-down décor at Shepherd’s Bush, it was nice to walk into the Nottingham bar and be greeted with the design elements we’ve come to recognise over the past year. Remember how I was saying that Shepherd’s Bush was one of the few bars where there weren’t cheeky chalkboards for the staff to impose their own personality? Well, Nottingham has boards, and they’re easily the rudest ones in the whole operation. My favourite one was a cutout of the Queen that had been made to say “I fucking hate Carling!”, which is particularly splendid because it works on multiple levels.

The beer selection is as fine as you’d expect: not as pared-down as Leeds, not as exhaustive as Shepherd’s Bush. We celebrated the end of our quest with one of BrewDog’s milder offerings (How To Disappear Completely), and then ramped up via a couple of stronger guest brews (400 Pound Monkey and Mikkeller K:riek), finishing off with our old favourite session-topper of Cocoa Psycho. Aside from beer, there are also some snacky food options, plus a big hot dish of the day – sometimes it’s veggie, on this particular day it wasn’t, but we’d kind of committed to dinner at Kayal by then.

To be honest, 13 articles into this series, I’m starting to run out of things to say about these bars, so it’s almost a relief that this’ll be the last one I have to write about for now. Nottingham's a fine example of what BrewDog bars do - good beer, knowledgeable staff, enjoyable atmosphere. If the main USP I'm taking away from it is a blackboard that refers to David Dickinson as a "tangerine twat", well at least that's better than nothing. 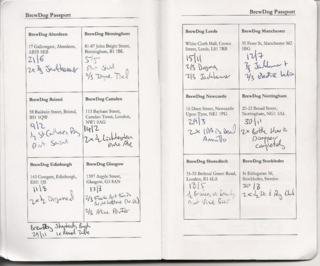 But that brings us to the question people have been asking The BBG and me since we started this tour of all the BrewDog bars: which one's the best? And to be honest, we still don't have a definitive answer. It depends on what you're looking for in a bar.

Do you want beer, for example? Lots and lots and lots of beer? Then the sheer volume of beer available at Shepherd's Bush will keep even the most jaded palate happy. (I'm not saying we have jaded palates at this stage, but The BBG and I were alarmed to pick up the list of bottled BrewDog beers on sale at the Bush, and realise that of the twenty-odd listed we'd already drunk all of them bar one.)

Bristol, on the other hand, wins out on sheer enthusiasm for beer. Admittedly all the bars display this to some degree or other, but Bristol was the only place where our server was so hyped up about our buying a bottle of AB:08 that he followed us to our table to give us some tasting notes. That was some pretty fine stuff right there, but the single best beer I drank all year came out of the fridge at Newcastle. Bitch Please Islay Cask can be summed up in a show-stopping one-liner - it's a beer, brewed to the strength of a wine, that tastes like a Scotch - and if I ever see another bottle of it on sale anywhere else, I will physically harm anyone who stands in the way of my possessing it.

If you're looking for food, each bar has its own set of possibilities, and it's been interesting to watch these evolve as the year's progressed. Newcastle was the first indication of how things were changing, as they eschewed the burgers and pizzas of Camden for snackier delights like beer-infused cakes and Scotch eggs. The pizzas at Camden are still excellent, though their burgers are totally outclassed by the mountainous affairs on sale at Glasgow. More recently, a series of ever-improving barbecue pop-ups at Manchester, Shoreditch and Shepherd's Bush have added more options to the table. Manchester's ultra-sloppy pulled pork roll is a personal highlight for me, while Shepherd's Bush gains The BBG's approval for finally remembering that vegetarians like barbecues too. Curiously, Stockholm remains the only bar to have a separate sit-down restaurant area: it'll be interesting to see if anyone else follows suit.

How about atmosphere? Well, it's hard to peg down the feel of an individual bar based on one or two visits, and in at least one case it would be utterly unfair to do so. Certainly the flagship at Aberdeen was the bar we came away from with the biggest sense of disappointment, but the pressure the staff were under during the weekend of the AGM must have contributed largely to that. Manchester was our favourite for a late-night session, purely because we spent two consecutive nights in there till closing time. Glasgow has the best-arranged bar area for people looking to buy a carry-oot, as I believe the local parlance has it. Leeds wins points for its cosy size and its willingness to engage on Twitter. Shepherd's Bush has the most confusing toilets when you're drunk, with bizarre Dyson hand-driers featuring invisible air outlets (The BBG reports on a woman who tried running towards one from the other side of the room in an attempt to trigger the drying mechanism). And Nottingham will have a special place in our hearts for being the final stop on this tour, and for having the most inventive swearing on its walls.

But why try to pick favourites? Every bar is different - The BBG pulled me up the other day for referring to the BrewDog bars as a 'chain', when there's enough individuality and autonomy in each one to make them very different while still sharing an overall philosophy. They're all worth visiting for one reason or another. Hopefully this series has shown you the wide range of those reasons, and encouraged you to give them a look. And although that's it for the BrewDogging Projick for this year - well, maybe just a quick visit next week to check out the new prototypes, but then that's it - we'll certainly keep an eye out for any new bars they open in the future, and report on them when we can. Although I suspect that may be a more difficult task than you might at first imagine. Being a monkey, and all.