MOSTLY FILM: What The Fox Said Next 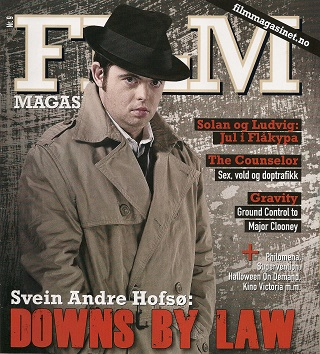 Mostly Film's looking lovely at the moment, isn't it? Shortly after publication of the last piece I wrote for it, they gave the site a great big redesign, and it's all the better for it. Not only does it look pretty, but it's also much easier to navigate: so if, for some peculiar reason, you wanted to read all the pieces I'd ever written for it, just click on my monkey face in the right sidebar under Contributors and there they are.

Currently at the top of that list of pieces you'll find What The Fox Said Next, the latest one of those Monoglot Movie Club articles where I write about unsubtitled films I've seen on my various travels. It covers the two films (and one TV show) I watched in between stints of working, eating and sleeping in Oslo. I don't think I'll ever be so short for material that I'll write about my actual job, but this backup piece will cover some of the other things relating to my Norway trip.

That magazine cover over there is genuine, by the way. He's a detective, he has Downs, what else could you use as a title?

First of all, getting there. It's fascinating to realise that at the start of this year, I'd never even heard of Norwegian Air Shuttle, let along flown with them. But most of my various Nordic excursions in 2013 - Sweden (twice), Finland and Norway - have involved the use of their splendidly-tailed aircraft. The guys I was working with in Oslo thought of them as a bit of a joke - "you know when you talk about British Airways, and we talk about Norwegian Airways, they're not the same thing, right?" But as budget airlines go, they're actually pretty nifty. Obviously, you get what you pay for: but in my case, the ability to do the whole trip with just hand baggage saved me a few quid, and as long as you remember to take something to drink on board with you, you’ll be just fine.

Once you’re at Oslo airport, getting around isn’t too difficult, though potentially a little pricey. The Flytoget airport express is just as whizzy as its London Heathrow equivalent, and just as terrifyingly expensive. In town, the Ruter transport system is pleasingly integrated, with a single flat fare covering any journey within the central zone of Oslo, no matter how many changes of transport medium it takes. When I was last there a year and a half ago, I was more or less living in the mountains, and making an utterly gorgeous hour-long commute down into the city each day. Amazingly, that cost the same three quid or so as the two-stops-on-the-subway I was doing this time round.

My base for the week was, I believe, the first Best Western hotel I’ve ever stayed in in my entire life. The Kampen Apartment Hotell was another one of those apartment-style jobbies I’ve used occasionally, which just means that the room has rudimentary cooking facilities along with the usual stuff you’d expect. (Rudimentary to the extent that there are virtually no utensils in the room – it appears you have to ask for them at reception, because they keep getting nicked.) It wasn’t too bad – a few minutes walk away from the station, a serviceable if slightly rundown room, and a perfectly acceptable restaurant on the ground floor which seems to run special offers on its main courses most weekday nights.

As for those trips to the cinema I wrote about, both of them – like my viewing of Kon-Tiki last year – took place at the Colosseum cinema in Majorstuen. It’s a four-screen multiplex, and I’ve now seen films in every one of its screens apart from the one that counts: screen one, apparently the biggest THX cinema in the world, but taken up with The Hunger Games while I was there. Maybe next time. Be warned that although the automatic ticket machines claim to allow the purchase of tickets, they didn’t seem to like my UK credit cards very much, so you’ll probably have to negotiate verbally with the nice people at the cash desk. (Which worked fine for me, although apparently my pronunciation of ‘Ragnarok’ leaves a lot to be desired.) There are plenty of places nearby for a pre- or post-film meal – the two I ended up in are Dolly Dimple’s pizzeria and Asian fusion joint Sushi & Wok. (For more authentically local grub, there's Larsen Restaurant, but that always seemed to be rammed whenever I went past it.)

Finally, a few more words about Ylvis. As noted in the main article, their chat show I kveld med Ylvis has just wrapped up its third season on TV Norge. If, like me, you’re ever trapped in Norway with a TV that doesn’t have access to the channel, their Web TV option is pretty cool. For 39 euro a week, you can get access to live streams of TV Norge and several related channels, plus free run of their archive of old shows. It’s only available by subscription, though, so you have to pay for a week’s worth of telly and then remember to cancel before the next week kicks in. (My own subscription was active for a grand total of two hours. Worth it, though.)

None of this is of any use if you’re outside Norway. (I’ve tried it, it’s region blocked.) But then you’ve got YouTube to fall back on, which is even better than television thanks to the increasing amount of subtitled Ylvis material on there. TV Norge has an official channel with highlights from the show: Ylvis' Facebookies has a less official one with fan subs of the sketches they’ve missed. And some people are being very cheeky indeed and putting up entire episodes with their own subtitles, to give you a more realistic flavour of how the show works. This is of course morally dubious as hell, but here you go anyway.