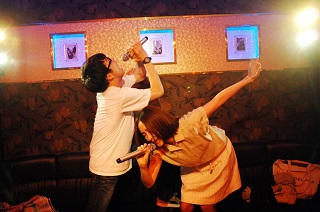 Ideally this would just be a simple YouTube playlist, but I've had to get some of these clips from alternative sources. And as ever, there's every chance that copyright lawyers will have nuked some of these videos from orbit by the time you get to see them. With those caveats in mind, here are three video playback windows...

This YouTube playlist has trailers for nine of the eleven films in the season. In order, we have The Story Of Yonosuke, The Drudgery Train, Sorry, Shindo, Parade, Otakus In Love, Love Strikes!, Colorful and Capturing Dad.

This one here is a trailer for Your Friends, courtesy of the good people at Eigapedia.

Finally, as I couldn't get hold of a trailer for the one archive presentation in the set - the 1963 production 18 Who Caused A Storm - you'll have to make do with the whole film, courtesy of the notoriously dodgy Chinese site Youku. Yes, I know there's a catch, you'll have to work out how to get around that for yourselves. Do I have to do everything for you?

(On an unrelated matter, I also briefly popped up on Mostly Film again earlier this week, as part of the analysis of the Mostly Film Best Of 2013 list. And I do mean 'briefly'.)

[Left to right: The Story Of Yonosuke, The Drudgery Train, Sorry, Shindo, Parade, Otakus In Love, Love Strikes!, Colorful, Your Friends, 18 Who Caused A Storm. Unfortunately, Capturing Dad appears not to have been released on DVD yet.]