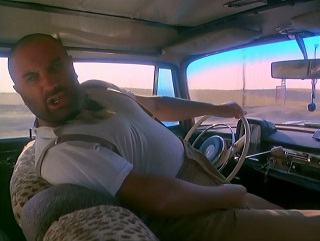 First up, Forbidden World, as chosen by self-styled intergalactic troubleshooter and cocksman Indy Datta. This trailer isn't quite as rude as the clip he chose for the article, but it has its moments, so exercise caution when watching.

It's followed up by Siesta, as chosen by me, inspired by a recent online discussion of Miles Davis' contribution to film over the years. One fascinating fact that I had to cut for length: the casting of Gabriel Byrne as a Spanish acrobat may indeed be inexplicable, but it led to him meeting Ellen Barkin and their getting married shortly afterwards, so awwwwww.

Next comes La Residencia, the selection of Gareth Negus, here trailed under its US title The House That Screamed. The information that director Narciso Ibáñez Serrador also devised 3-2-1 was news to me, and makes his later film Who Can Kill A Child? all the more disturbing, because you could easily parse that as a game show title as well. Or is that just me?

Matthew Turner's not gone quite as far back in time as the rest of us, choosing the 2008 baseball movie Sugar. To be honest, movies about baseball tend to be doomed in the UK anyway, even when they involve the apparently winning combination of baseball and sudden, violent death.

Blake Backlash wraps things up with Slayground, which I'm pretty certain used to clutter up the bottom shelf of my local video shop, to the extent that I can even visualise the Thorn EMI logo on its sleeve. Coincidentally, it would appear that it's getting a re-release through Network DVD next month, which may have a terminal effect on its obscurity.

Finally, going back to my review of Mary Lambert's first film Siesta, here's a bonus trailer for her most recent one Mega Python vs Gatoroid, which may give you an indication of where her career is at now. (The key scene appears to be a catfight between 80s pop stars Debbie Gibson and Tiffany, which is available in its entirety elsewhere on YouTube if that's the sort of thing you're into.)