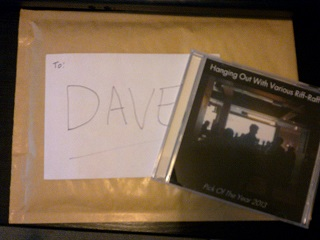 Here's the deal. I produce half a dozen or so copies of the POTY CD every year for a small collection of regular recipients, including one for the competition prizewinner. Each copy is produced to an amateurish professional standard, with an inlay card and a label. For the purposes of this extended competition, though, I'm going to burn an additional copy onto a CD-R and do nothing else with it at all. You'll have to label it and write the songs on the sleeve for yourself. Hey, it's intended as a second prize, I have to make it not as good as the first. You'll still get all the songs to listen to.

So, leaving aside Dave's epic win, the competition rules stay the same as they were before, and are documented here. Answer the question at the bottom of that page (the one relating to the address where the cover photo was taken), and email it to me in time for the closing date of 11.59pm GMT on February 28th, 2014. As before, the nearest building number to the actual address will win: in the event of a tie, the first correct entry received will get the prize. Good luck, again.

(A fun fact for you: Dave nailed the address perfectly first time. See if you can, too.)