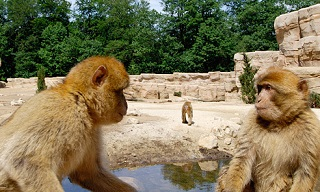 In the meantime, your Simian Substitute Site for January 2014 is Apenheul, officially voted the second most fun attraction in the Netherlands by the Dutch equivalent of the AA. Based in the central city of Apeldorn, it's a primate park with over 200 monkeys roaming freely. If that sounds like fun to you, then the site tells you all about what's on offer, including the helpful provision of monkey-proof bags to stop them running off with your packed lunch. Not that you'll be able to go there right now, unfortunately, as it's closed for the winter. But locations in the Netherlands have been uppermost in my mind for the last few weeks (you'll find out why soon enough), which is how I stumbled across this one.

Anyway, Happy New Year and all that. As is traditional, the first Simian Substitute Site of the year is being written with the assistance of a massive hangover, provided this year by the combination of Hampstead Comedy Club and BrewDog Camden. Any factual inaccuracies and spelling mistooks are therefore entirely their fault. But feel free to comment on them in the box below anyway.