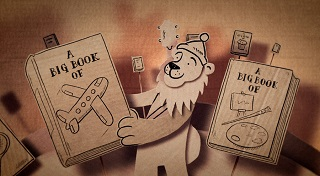 In the case of the three promos included in the second BAA Public Choice collection for 2014, the answer, sadly, is mostly no. Arctic Monkeys: Do I Wanna Know (David Wilson) doesn’t have that alchemy – it takes ages to develop from its sine wave opening to the cars ‘n’ girls psychedelia tribute that it really wants to be, but fears people will misinterpret if the whole video’s like that. By the time you get to the good stuff, you've lost interest. Bingo Players: Get Up (Rattle) (Tim Hope) doesn’t really have it either: the techniques used to animate a photorealistic gang of vigilante ducks are impressive, but they hardly interact with anything else in the frame, making it a somewhat pointless exercise. And I can barely remember the song now, either. Benjamin Scheuer: The Lion (Peter Baynton), on the other hand, has alchemy in spades. It needs to: the song is just an inch away from smug Mumfordry, while the video is an overly literal interpretation of the song (always a risk when the lyrics relate to animals, and we’ll see another example of that in programme three). But somehow the two work together to cancel out the failings of each other, rather than reinforce them.

It's a similar problem with the adverts, with the added issue that they need to grab your attention in a much shorter timeframe. Of the three on display here, Barclay's: Life Skills (Marc Reisbig) is short, worthy and unmemorable: while Flora: Wrestlers (Daniella Orsini & Joe Orton) is only really memorable for the cheekiness of its story twist – I couldn’t tell you from memory what it looks like now, and it could just as easily be a radio spot. For an example of an ad that does its job right, look at WWF: We Don't Farm Like This (againstallodds). A simple concept (and, happily, one that’s not completely spoiled by the title), well executed, and getting its message across in a minute without being too preachy about it.

The three Public Choice categories are Music Video, Commercial and Short Film, so everything else we're going to look at here falls into the last one. The Ballad of Julio (Leo Blackmur, James Bown, Zan Flaker Berce, Alex Speed & Michael Wilde) is a University of Hertfordshire student film with a shared credit: just one silly idea presented with a degree of rough-edged charm, but not much else going for it apart from that. At the other extreme, My Face Is In Space (Tom Jobbins) possibly has too many ideas. It has a smart narrative conceit – the lead character’s picture is part of the disc of information that was sent out on the Voyager space probe, and he’s trying to build himself a life based around that one claim to fame. It’s a broad enough idea to work as the hook for a mix of diverse techniques that don’t quite mesh together over the full ten minutes, feeling more like a showreel than a story.

Some of the other narrative shorts fare better. A Recipe for Gruel (Sharon Smith) is an arty but biting satire showing an old woman’s battle against the elements to make a simple meal, contrasted against the chirpy voiceover reading out the recipe. Jamon (Iria Lopez) is a Latin-flavoured fable of a teenager’s inability to fit in with the rest of his family, because he’s a pig. Literally. It's got a wickedly nasty payoff: audiences tend to relax when they realise they’re watching a funny animal short, and this film takes sneaky advantage of that. There's more animal fun in Mr & Mrs Panda (Will Anderson), a light animation with semi-serious intent. It follows the subtitled interaction between two Chinese pandas trying to get it on in Edinburgh Zoo, and intercuts it with interviews with visiting Chinese couples discussing their own relationships. You could think of it as a Creature Comforts film deconstructed into its two main components, if you like: it’s more rough-hewn than that description would imply, but good enough to hold its own against the comparison.

Marilyn Myller (Mikey Please) is directed by a previous BAA People’s Choice nominee (and it’s only just dawning on me how unusual that is this year, because there are a lot of new names here). This is the best film of Please's I’ve seen to date, a nice bit of carefully calibrated bathos that starts out as a creation myth and slowly transforms into something more mundane. (The fact that the creation myth is narrated by Josie Long should be your first clue.) Its deadpan approach to comedy makes for an interesting comparison with Handle with Care (Jun Iwakawa), a hyperdetailed infodump on how to look after a newborn baby. It’s reminiscent of the animated sequences that were used in the TV version of The Hitch-Hiker’s Guide To The Galaxy, which freaked us out back in the 80s as they somehow expected us to cope with three pieces of information on screen simultaneously. This film goes way beyond that, packing every inch of the frame with funny captions and images – which makes it all the more frustrating that it’s not available online, for the six or seven rewatches you feel you need after seeing it the first time. (However, the crowd-pleasing segment on ‘Poo and Wee’ should give you a feel for it.)

This leads us into my two favourite films in this programme, with the aforementioned The Lion not too far behind. The Hungry Corpse (Gergely Wootsch) marks the belated appearance of one of my favourite BAA clichés, the After Effects Greasy Fluff Plug-In, used here to add some atmosphere in a prologue documenting the period immediately after the lead character’s death. Cut to the present day, and he’s wandering round Trafalgar Square, speaking with the voice of Bill Nighy, and having reluctant conversations with a pigeon (played by Stephen Mangan). Animation allows you to mix emotional effects in unexpected ways within a single story, and this does that rather beautifully, culminating in a surprisingly touching final image.

But it's almost unfair how outclassed it is by Carpark (Ant Blades): an utterly perfect one-minute gag short, and the highlight of this programme, maybe even of the whole Public Choice programme. In previous years, the Simon’s Cat films have had a similar effect on audiences, who love their ability to cram story, character and laughs into a small space, and get the hell out as soon as they’re done. If you’ve been avoiding all the video links in this piece for some reason or other, then this is the one that you really need to click, because I don’t want to say anything else about it.

There's still one more programme of BAA shorts to be reviewed this year - look out for it here soon, or see if it's turning up at a cinema near you.