Simian Substitute Site For March 2014: The Serco Prize for Illustration 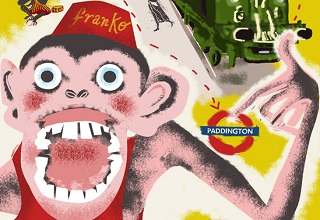 Books: An Astronaut's Guide To Life On Earth is a memoir of sorts by Commander Chris Hadfield. You know the guy: he was on the International Space Station last year, made a video of Space Oddity, everyone went nuts. As you’d imagine, he’s got one hell of a life story to tell – he’s an articulate representative of what may turn out to be the last generation to assume that the people we send into space have to be the best people in the world, rather than the ones with the most money. But as good as his stories are, what he’s done with them is rather surprising. Because Astronaut turns out to be a self-help book in disguise, telling you that the techniques he used to get through a space walk are the same techniques anyone can use to get through a potentially stressful situation. In effect, it’s about thinking through all the worst-case scenarios – “what’s the next thing that could kill me?” – and preparing for them in advance so that your response becomes second nature. That’s easy for one of the best people in the world to say, obviously: but Hadfield isn’t in any way preachy, simply suggesting that his mindset can be applied elsewhere. The result manages to be inspiring in several ways, while remembering to be entertaining as well.

Food and Drink: On November 30th 2013, The Belated Birthday Girl and I became two of a small number of people on the planet who'd visited every single BrewDog bar. It's a record that stood until January 22nd 2014, the day when BrewDog opened their fourteenth bar in São Paulo. As I write this, they're just having the launch night for their fifteenth in Tokyo. These are two locations that rule out the possibility of a casual visit in the near future (although, let's face it, we'll probably get round to Tokyo eventually). So at the moment, our trips to BrewDog bars are all return engagements, with the occasional special event thrown in. What took place at BrewDog Camden on the day before Valentine’s Day probably counts as special: a one-off collaboration with chocolatier Paul A. Young, in which thirty or so punters took part in a tasting of various beer and chocolate pairings. Some of our favourite BrewDog beers have obvious choccy overtones, but the fascinating part was seeing unexpected new accents being brought out of brews like Watt Dickie when you combine them with particular types of chocolate. It was a fun event, and gave the lie to the stereotype that craft beer is an indigenous hipster thing: our corner of the bar had ten or twelve people of wildly differing backgrounds and nationalities, all happily bonding together over beer. It's the sort of thing that London does brilliantly when it works, and makes Nigel Farage look like the shandy-drinking cockend that he is. More of this, please.

Theatre: It's not that often these days that a new theatre opens in London. Which makes it all the more amusing that the capital’s latest venue, the Sam Wanamaker Playhouse, is so resolutely old-fashioned. Shakespeare’s Globe has managed to corner the market in the traditional staging of Shakespearean drama, but that whole lack-of-a-roof thing has limited its ability to open in the winter months. Wanamaker always planned to have an indoor theatre to complement his Globe, and this year it finally came into being. The opening production of The Duchess Of Malfi (now finished, I’m afraid) turned out to be a great demonstration of what the theatre is capable of doing. It’s an intimate space, entirely illuminated by candlelight, the brightness controlled by chandeliers simply being raised or lowered as required. It gives the place an atmosphere all of its own, and challenges directors to find ingenious solutions to problems we no longer have (for example, the dramatic reveal in the second act of Malfi, which requires a sudden massive change in the lighting). I’ll be fascinated to see how the environment copes with other productions, and with less traditional forms of entertainment – the prospect of seeing the Rubberbandits there at the end of March is a very tempting one…