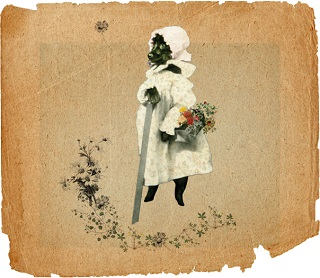 In the meantime, your Simian Substitute Site for April 2014 is Harp And A Monkey, the official homepage of a three-man band of electrofolk storytellers from Lancashire. I first became aware of them thanks to Mike Harding and his terrific Folk Show podcasts - I end up downloading more of them than I actually ever listen to, but the ones I listen to are always full of good stuff. HAAM are the sort of band who cherish a review calling them "the sons of the Oldham Tinkers locked in the BBC Radiophonic Workshop with only the British Film Institute back catalogue and a handful of scratchy folk LPs from the early seventies for company," and I'm the sort of person that a description like that was directly aimed at. From the website, you can read about their history, listen to some of their tunes, and become frustrated at their general reluctance to play down south. Their new album, All Life Is Here, has just hit the shops, and is where the image at the top of the page comes from.

What about me, though? The more eagle-eyed of you will have noticed that since the Simian page on March 1st, there's been precisely bugger all new content on this site for an entire month, which I think is some sort of first since The Great Hiatus Of 2006. Sorry about that. At the moment, my life is tied up completely between work stuff and domestic stuff, both of which are going well, but to such a degree that I've got no real time for anything else. It probably seems like a copout to announce that the six-months-late writeup of our Hong Kong holiday got a bit further along in March without actually being published, but it's true.

Anyway, I think things should run a little more smoothly in April. There should be some progress on those travel pieces that have been on the back burner for ages, plus a new thingy for Mostly Film, and the return of a feature that you'd probably assumed was long gone. Unless none of them happen at all, of course. Either way, the comments box is below: you know what you can do with it.

Listened to a bit of Wilko being interviewed on the radio last week. Other than that I don't know what to say, but you know what I mean ............