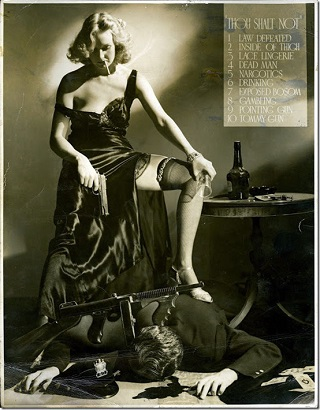 This season's been in the works for a while now. Pre-Code restorations have been a highlight of the London Film Festival for several years: as far back as 2007 I reported on a screening of Jimmy The Gent, and since then we've had the likes of The Match King, Heat Lightning, Jewel Robbery, The Doorway To Hell and Picture Snatcher. The best we've been able to manage to date is pairs of them joined together in double bills. But the BFI season gives us 21 of the damn things in four weeks: based on the evidence of a Bank Holiday weekend binge, consuming these films in bulk only makes them even more fun.

This being the BFI, it doesn't stop with a simple presentation of the films. The May 2014 issue of Sight & Sound magazine had a number of essays on the subject of Pre-Code cinema, including one by Mike Mashon from the Library of Congress, the US Government body which has preserved many of these films for the good of its nation. The articles aren't available online, so you'll need to pick up your own copy if you want that background material - or, if you can travel back in time to May 2nd, you can see Mashon in person delivering a lecture version of his essay with the magnificent title Vile And Unwholesome Moving Pictures.

Mashon rightly points out that knowing the historical background to this period helps you appreciate the films even more. In the early 1920s, the fledgling film industry was in a right old moral mess, with star Fatty Arbuckle implicated in a rape/murder case and director William Desmond Taylor being murdered himself. The studio chiefs knew that if they didn't do something about the growing sense of outrage at Hollywood's laxity, then the government would do it for them, and they'd lose all control over the empire they'd been so carefully building. Hence the creation of the MPPDA (Motion Picture Producers and Distributors of America), headed up by a man called Will Hays.

During the rest of the twenties, Hays worked with the movie makers and miscellaneous moral guardians (including a whole series of local censorship boards, all of which were working to different standards). In 1930 he finally came up with the Hays Code, which contained a series of guidelines informally broken down into Don'ts and Be Carefuls. The lists cover all the major topics that every movie censor watches out for today, albeit in slightly less sensitive language than we're used to: Mashon is particularly delighted that one of the Be Carefuls involves the depiction of "theft, robbery, safe-cracking, and dynamiting of trains, mines, buildings, etc. (having in mind the effect which a too-detailed description of these may have upon the moron)."

But you can have all the standards in place that you like: if nobody's prepared to act when they're flouted, they don't mean a thing. And having a list of standards to flout gave some studios a certain degree of focus. The most focussed of all was Warner Brothers, who are most heavily associated with the Pre-Code era. Committed to producing ludicrous amounts of product a year, they made lots of contemporary films (no need for special costumes or sets), focussing on the main issues of the day (the Depression, prohibition), and as a result developed a house style that the public just couldn't get enough of.

The five films I caught over the opening weekend of the season sum up the broad range of results that this approach had. You might wonder what a musical like Gold Diggers Of 1933 is doing in here, but if anything it's the perfect summation of (almost) everything that's great about the era. A backstage story, with the onstage sequences directed by Busby Berkeley (and making utter nonsense of the plot point that the producer's had to cut corners to put on the show): rampant sauciness as the female leads use their wiles to get their way: and all of it played against the backdrop of an economic catastrophe, brought to the forefront in the literally show-stopping number Remember My Forgotten Man.

About the only thing that Gold Diggers doesn't have to mark it out as a pre-Code pic is gangster violence, but there's plenty of that elsewhere. Little Caesar is probably the most familiar movie out of all of the ones I saw this weekend, which may be why it had the least impact when I watched it again. Mind you, I do have this theory that Chief Wiggum on The Simpsons has now broken Edward G. Robinson movies for all of us: but that doesn't explain why Robinson's later and lesser-known Two Seconds is so staggeringly watchable. During the two seconds between the switch being flipped on an electric chair and his death, Robinson's character flashes back to his happy life and how he ended up on a capital charge. Inevitably, dames are involved. Adapted from a stage play, like many of the films in this season (there's a whole other study to be made of why nobody was complaining about the effect of Broadway on public morals), Robinson carries the whole thing with a brilliantly calibrated performance as he's dragged into his own personal hell.

I saw Two Seconds and Little Caesar as a Robinson double bill: similarly, I also caught two Loretta Young pictures back to back, although in both cases she's overshadowed by her male lead. Taxi! is James Cagney's film really, although it can't decide if it wants to be a gritty thriller about rival cab drivers in a turf war, or a romcom about Cagney's anger management issues, and keeps seesawing between the two. Similarly, the cheekily-titled Employees' Entrance ("...takes you through the back door...") may have Young as a harrassed department store employee, but it's Warren William's harrassing store boss that you can't take your eyes off. Again against the backdrop of the Depression, he's a hilarious and terrifying force of nature, showing how one man could take charge and get things back on track, but also showing the human collateral damage he'd leave behind him.

That's just five films out of twenty-one: at the time of writing, most of the season has still to play out over the next few weeks at BFI Southbank. Book now, or women in frilly pants will shoot you dead.