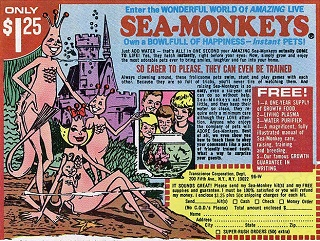 In the meantime, your Simian Substitute Site for May 2014 is a subsection from The Sea Monkey Worship Page, featuring suggestions on how to celebrate National Sea Monkey Day on May 16th. 'National' in this context means 'American', obviously. Back in my childhood days when the US comics I bought weren't all full of dirty sex stuff, I have fond memories of adverts like the one at the top of this page, offering you the chance to own your own kingdom of undersea creatures for a mere dollar or two. Even then, I managed to work out quickly that these weren't actual monkeys at all, but it would take me several decades to learn that the kids of America were being sold brine shrimp by Nazi sympathisers in the mistaken belief that they would eventually turn into aquatic simians. (The brine shrimp, I mean, not the... oh, never mind.) Still, enough people remember them for them to have their own day of celebration once a year, so knock yourselves out.

Full disclosure. Really, really attentive readers may have noticed that another, more Christmassy bit of The Sea Monkey Worship Page was the Simian Substitute Site back in December 1998. I think the fifteen year gap between the two lets me off the hook in this case. You may disagree. In which case, feel free to disagree in the comments box below.